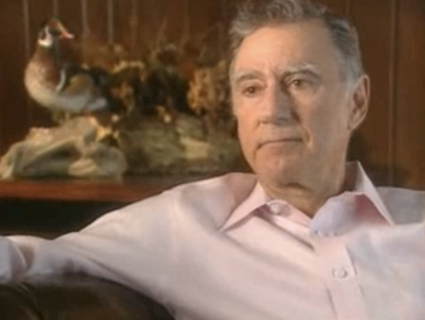 The biggest donor to the pro-Rick Santorum super-PAC in January was a man you’ve almost certainly never heard of: William J. Doré Sr., a megarich energy executive from Lake Charles, Louisiana, with a short but complicated history of political giving. His $1 million donation to the Red, White, and Blue Fund was one of the largest gifts of the cycle, and almost certainly the most mysterious.

Despite post-Citizens United fears of profligate dark money spending, for the most part, super-PAC donors have been loud and proud about their political aims. Sheldon Adelson, primary benefactor of the Newt Gingrich-supporting Winning our Future PAC, recently boasted to Forbes that he could spend $100 million on the race if he wanted to; on Thursday, comedian Bill Maher justified his $1 million gift to the Obama-supporting super-PAC Priorities USA by earmarking his check for “kicking ass!” Doré, however, has kept the motivations behind his sudden call to arms to himself.

“Mr. Doré is unavailable for comment,” is all Doré’s spokeswoman would say when reached by phone on Friday.

Doré’s beneficiaries at the Red, White, and Blue Fund were only slightly more forthcoming. “I’ll just go ahead and tell you that we don’t expand on our fundraising beyond our FEC reports,” said Stuart Roy, the group’s spokesman. Asked if the PAC had ever reached out to Doré, Roy demurred. “We file with the FEC and leave it at that.”

The move left even long-term observers of Louisiana politics, where the oil and gas industry’s political influence are hardly a secret, scratching their heads. “I’ve never known him to really be too active in Louisiana politics or in the Republican party or any of that,” said Warren Caudle, a businessman and Republican activist from Lafayette. “There are other people in Louisiana that I would expect to be doing that other than him.”

Caudle wasn’t alone. I called up Robert Hogan, a political science professor who studies campaign finance at Louisiana State University, and Wendell Lindsay, the president of the government watchdog Common Cause Louisiana. But neither of them could think of an instance of Doré similarly attempting to influence the political scene.

Allen Bradley, a former Democratic state representative from southwest Louisiana, called Doré “an enigma.” Bradley has met Doré and visited his house once, but says Doré’s politics remain a mystery to him. “I think that there might a lot of folks that feel that way, because he seems to be somewhat quiet about everything he does,” Bradley said.

Doré is “an enigma,” says one former Louisiana lawmaker.

If Doré’s sudden emergence is a head-scratcher, so too is his previous record of political giving. Between 1999 and 2011, he gave $165,000 to Louisiana elected officials, according to data compiled by the National Institute on Money in State Politics. More than half of that money went to Democrats.

“In Louisiana, quite frankly, the tags don’t make as much sense as they do in other places,” Bradley said. “Most Democrats in Louisiana would qualify for Republicans almost anywhere else.”

On the federal level, Doré has donated modestly to Republican causes over the last decade, giving $15,000 to the Louisiana Republican party and propping up candidates like his local congressman, Rep. Charles Boustany.

But before he went all in for Santorum, Doré also gave $4,000 in 2008 to Colorado Rep. Jared Polis, a gay, progressive Democrat from Boulder whose politics are about as far from Santorum’s as you can get. (A Polis spokesman says the two men do not know each other and had no explanation for the donation.) That same year, Doré maxed out to the Democratic Senatorial Campaign Committee, chipping in $28,500 toward what turned out to be a landslide election.

The fickleness applies to local races too. Doré backed liberal New Orleans Democrat Cedric Richmond in 2008, and he contributed to the campaigns of Democratic Sen. Mary Landrieu and her brother, New Orleans mayor Mitch Landrieu. He supported Democrat Chris John’s US Senate bid in 2004 (against David Vitter, whom he has since boosted) and donated to John Kerry in 2004. If he held any deep political beliefs, he kept them close to the sweater vest.

Doré was an early backer of Blueprint Louisiana, an extraparty organization founded in 2006 by over two dozen mostly Republican businessmen to push a slate of political reforms. The Lafayette Independent Weekly reported that board members—of which Doré was a founding member—each gave $50,000 in seed money to get the group off the ground, and Doré chipped in another $19,000 to its PAC. Backed by the US Chamber of Commerce, Blueprint called for a short list of steps that should be taken to improve the state’s business climate. Their proposals included ethics and pension reform and more funding for early childhood education—a concept Santorum has blasted as an attempt by the government to “indoctrinate your children.” (In another break from Santorum, who dismisses efforts to provide universal access to college, Doré has pumped millions of dollars into the Horatio Alger Association’s scholarship program, and helped launch a $500,000 scholarship program for students who compete in rodeos.)

If Doré’s career offers any hints at his political leanings, it’s in that same chamber of commerce mold offered up by Blueprint. Doré’s rise to the top of the business world is befitting of a man who was honored with the Horatio Alger Award from the Horatio Alger Association in 2000. Raised in a poor, half-literate, half-Cajun household in southwest Louisiana, he paid his way through college at McNeese State and got his big break when, as an insurance agent, he was hired on the spot by a prospective client who ran a diving company servicing the oil and gas industry.

Doré built his company, Global Industries, through a series of risky countercyclical investments. His knack for scooping up discarded equipment on the cheap during oil busts led the New Orleans Times-Picayune to dub him “master of the clearance sale” in 1997. Doré’s biggest break came in 1992, when Hurricane Andrew temporary crippled the offshore drilling industry, triggering a boom market for companies aimed at maintenance.

But he also had an environmentalist streak, albeit one partly motivated by self-interest. In 2006, after purchasing a piece of coastal wetlands that had been ravaged by pollution, Doré joined forces with the Sierra Club to demand oil companies open up their pocketbooks to cover the cleanup costs. He took ExxonMobil and other oil companies to court, eventually winning a small victory in the form of new legislation forcing companies to pay for restoration costs.

Finally, in 2007, Doré cashed out, selling Global Industries—by then worth $2 billion—and taking a $700 million payday.

(Through his charity, the Doré Family Foundation, Doré, a Catholic, has also given generously to Christian organizations, according to tax filings. Those include Birmingham’s Church of the Highlands, one of the South’s largest megachurches, and Outback America, a ministry that runs couples retreats, parent-teen weekends, and other spirituality-building exercises. Outback is an outreach of JH Ranch, an evangelical outfit that asks prospective employees (PDF) questions like “Have you ever been involved in a homosexual relationship?”)

Doré and the Red, White, and Blue Fund are staying mum about the Lake Charles energy baron’s big check. He’s resisted the urge to start a Twitter feed, a la fellow Santorum benefactor Foster Friess, or speak to political conferences, a la Peter Thiel. In a year in which big money donors have sought out a spotlight proportionate to their largesse, Doré’s stuck to a characteristically understated profile.

“The one thing I’ve learned to respect about Bill is he has his own reasons for doing things,” says Lake Charles mayor Randy Roach, a Democrat who highlights his constituent’s history of bipartisan giving. “Bill is not really into party politics; he’s just into doing things the right way.”

At least one Santorum confidante, meanwhile, is willing to break the cone of silence surrounding the mystery donor. That would be Foster Friess, the group’s other big-time donor, who famously joked about the contraceptive powers of aspirin to MSNBC’s Andrea Mitchell. In an interview on Bloomberg TV earlier this month, Friess expressed his own shock at the then still-anonymous donation.

“Some guy sent in a million dollars!” Friess said. “We had no idea who he was. It just suddenly appeared. It wasn’t that someone had made a call.”