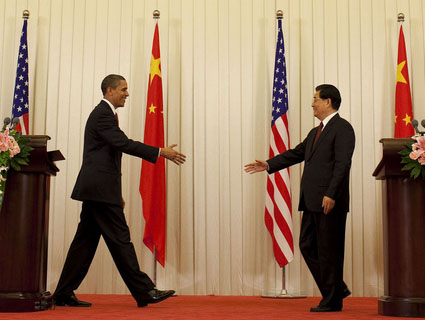 A crack appeared recently in the Great Firewall of China—where the government blocks Facebook and Twitter and censors search terms like “democracy”, “human rights”, and “dictatorship”. Google noticed early last week that Chinese netizens started accessing its social network Google+ and almost immediately began inundating President Obama’s page, Reuters reported yesterday. In what seemed like a mad scramble, commenters posted as early as 5:00 a.m. in China to be one of the 500 comments Google allows on each post. Google says it had not implemented any changes that would have allowed for access, which suggests that Chinese web users may have found a censorship loophole by surfing the internet on their cell phones rather than personal computers.

Some of the Google+ commenters joke that they are “? (zhan)”—occupying—Obama’s page. Others offer tongue-in-cheek commentary, complimenting the president’s physical appearance or asking him for travel recommendations. But the ones that captured the interest of news outlets—from the Washington Post to the BBC—are fearlessly political:

Even more surprising is the unusual absence of jingoistic China defenders who commonly rebut pro-democracy, pro-America comments in Chinese internet forums. For example, here are some comments to an article on popular web portal Netease about Beijing’s spate of sky-blackening pollution last December.

“It’s five times better than the weather in the U.S.”

Chinese netizens refer to these posters as the Wumaodang—the “Fifty-Cent Party”—because it’s widely rumored that these commenters are paid by the government (fifty-cents per post) to populate web forums with pro-Communist Party verbiage. The absence of these comments on Obama’s Google+ page gives us a rare glimpse of Chinese public debate without the noise of paid shills.