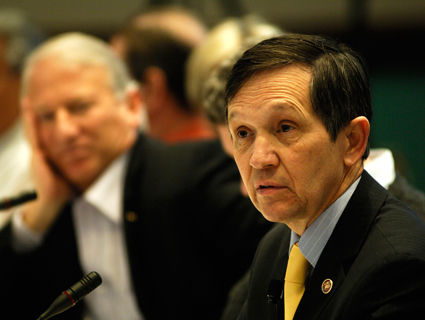 You may have missed it amid Newt Gingrich’s ruminations on algae and the Romney-Santorum nail-biter in Ohio, but there was a Super Tuesday result with serious ramifications for progressive politics: In the Democratic primary in Ohio’s 9th Congressional District, Rep. Marcy Kaptur knocked off Rep. Dennis Kucinich by double digits, putting the political future of one of Washington’s loudest liberal voices in serious doubt. Again.

Kucinich, who sought the Democratic presidential nomination in 2004 and 2008 largely on an anti-war platform, was drawn out of his old Cleveland district during the state’s redistricting process (the state lost two seats after the 2010 census), ending up in a primary against Kaptur, a 15-term Democratic incumbent. The resulting, excessively gerrymandered 9th district hugs Lake Erie, stretching from Toledo, where Kaptur lives, all the way to Cleveland, Kucinich’s home. (Shira Toeplitz notes, “The district is connected by a bridge that’s only 20 yards wide, as well as by a single beach at one point.”) Kucinich took his best shots at Kaptur—alleging, for instance, that her campaign had illegally stolen all of his yard signs. But he faced a different set of voters, most of whom he’d never previously courted—and not even Russell Simmons could save him:

if you’re in Ohio today, please go and vote for Dennis Kucinich! we cannot lose him.

In his eight terms in Washington, Kucinich held down the far-left of the House Democratic caucus and built up his national profile in tandem. He famously called for the impeachment of President Bush and Vice President Cheney, then took things a step further last spring, suggesting that President Obama’s imposition of a no-fly-zone in Libya might also be an impeachable offense. He held out for months on health care reform because of his support for the public option.

But while Kucinich’s rhetoric has been unwavering, his record of accomplishments is relatively small. Kaptur is pro-life and votes accordingly, but otherwise holds fairly conventional liberal views for a Rust Belt Democrat. She’s also never traveled solo to meet with Syrian president Bashar al-Assad, and then defended him to her hometown paper.

The question now is what Kucinich will do next. Over the course of his career he’s demonstrated a remarkable ability to come back from crushing defeats. He lost three congressional races before he was 30, and was already a washed-up ex-mayor at 35. After moving to California for a brief period of soul searching, he ran unsuccessfully for two more statewide offices, moved to New Mexico for some more soul searching—and then came home and won a House seat. If believes he still has more work to do in Washington, the odds are pretty good he’ll try to find a way to stay there.

Case in point: Before opting to stay at home last year, Kucinich publicly contemplated moving to Washington state to run for a seat there. In an interview with Politico last week, his campaign spokesman, Andy Juniewicz, pointedly refused to rule out the possibility that Kucinich might exercise the Evergreen option should he come up short against Kaptur. (According to Public Policy Polling, just 22 percent of Washington state Dems want Kucinich to run for office in their state.) He has until May 18 to declare his intentions. Who knows, we may not have seen the last of Dennis Kucinich.