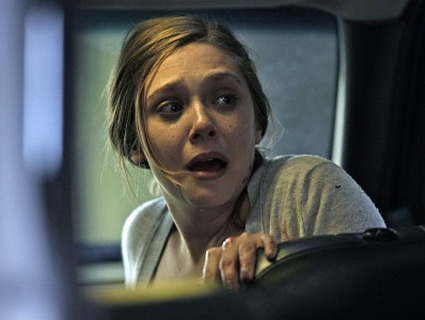 There are three things in life of which we will—unfortunately—always have too much: AM talk radio, vampire lit, and horror movies about pretty young white girls who get chased around their houses by deranged, one-dimensional killers. Silent House fits snugly into that third category.

The no-frills horror movie is the American remake of La Casa Muda, a badass 2010 Uruguayan film noted for its unrelenting intensity and stylistic novelty. The new version kicks off with an unmistakable been-there-done-that vibe: Sarah and her father John travel to their lakeside vacation home to take care of some much-needed renovation before the house is put back on the market. The creaky, borderline-dilapidated property is located in the middle of nowhere—no cell phone reception, phone lines, internet, or contact with the outside world. Almost all the home’s circuits are kaput. Nightfall is fast approaching.

Before you even begin mouthing the words “Hey, I’ve seen this one befo….” a man shrouded in shadows busts into the house, incapacitates John, and starts lumbering menacingly after Sarah.

Thus begins the white-girl-being-chased-through-the-house-athon: Sarah spends the next hour-plus making quick getaways into decrepit and dusty rooms, with the faceless stalker in hot pursuit. For practically the entire film, we watch Sarah—scared out of her skin—panting and scampering away from the invader, suspicious noises, forbidding darkness, loud footsteps, unexplained bloodstains, and even the apparitional figure of a little kid. You name it, this pretty young white girl is screaming and running away from it.

What’s that, you ask? What could this movie possibly offer that’s different and exciting?

Well, here’s one thing: Silent House is presented as one continuous shot—or rather, both the American version and the Uruguayan original were staged, filmed, and carefully edited to make it look that way.

Sure, it’s a shameless exercise in stunt filmmaking—like Russian Ark, but with more heavy breathing and bloodletting. But the remake’s directors Chris Kentis and Laura Lau (both of whom worked on the 2003 sleeper hit Open Water) manage to milk every drop of real-time tension out of the gimmicky premise. The slick editing, clever lighting, and gritty handheld camera work—courtesy of cinematographer Igor Martinovic—conspire to create an joltingly creepy ballet of sights and sounds. (A tightly shot escape sequence in the house’s basement stands out as especially nerve-frying.)

The film benefits hugely from the fact that Sarah is played by a promising, fresh talent: Elizabeth Olsen, whose short filmography includes 2011’s indie thriller Martha Marcy May Marlene and Spike Lee’s planned remake of Park Chan-wook’s deliriously good revenge drama Oldboy. Olsen stars in what is essentially a one-woman show, and turns in a bold, physical performance that sets her miles apart from your typical scream-queen eye candy. The raw energy and charm she brings to this unremarkable role should prompt comparisons to skilled performers like Ellen Page, Mary Elizabeth Winstead, and Maggie Gyllenhaal. (And, yes, she is indeed the younger sister of the Olsen twins, just in case you were dying to know.)

In the end, though, Silent House fails to achieve anything remotely close to classic status. For starters, it isn’t nearly as frightening or audacious as its Spanish-language counterpart. Its momentum is sapped as later scenes descend into more contrived and hallucinatory scenarios. And the final plot twist won’t flutter the heart of anyone who’s seen Shutter Island, High Tension, or this episode of The Twilight Zone. All the same, the film is impressive in its technical gusto, and will undoubtedly deliver that old familiar terror-flick fix to your system.

Silent House gets a wide release on Friday, March 9. It is rated R for disturbing violent content and terror. Click here for local showtimes and tickets.