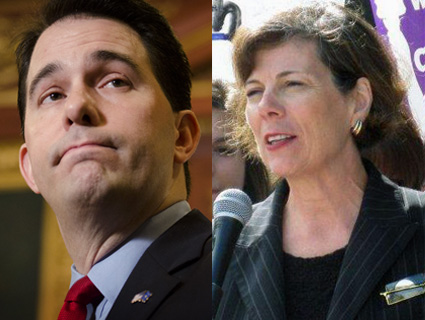 When she had to confront Wisconsin’s powerful unions, Kathleen Falk bargained hard and won millions in concessions. Faced with a similar situation, Wisconsin Gov. Scott Walker “dropped the bomb,” as he later put it, and stripped workers of their bargaining rights. Now, Falk is trying to strip Walker of his job.

For three straight years, from 2009 to 2011, Falk and negotiators from eight public-sector unions met in county government conference rooms or labor halls, ready to lock horns. Falk was executive of Dane County, Wisconsin’s second-largest county and home to the state capital, Madison. Each time they met, the unions agreed to cuts for the county’s 2,200 employees—a 5 percent pay cut one year, a 3 percent cut the next year, and new co-pays and higher deductibles the year after that.

The unions stung from the nearly $10 million in concessions. But looking back, what mattered to union negotiators, leaders, and rank-and-file members was that Falk met them at the table, looked them in the eyes, and negotiated. “It was going to be a tough pill to swallow,” recalls Dian Palmer, president of Services Employees International Union’s Healthcare Wisconsin chapter. “But there were no recalls for Kathleen Falk, because we worked together and got it done.”

Today, the 60-year-old Falk is the leading Democrat hoping to oust Walker in his looming recall election. Other Democrats, including Milwaukee mayor Tom Barrett, are mulling recall runs, but in an election with national consequences, perhaps no candidate creates as stark a contrast with Walker as Falk.

Falk is a dyed-in-the-wool liberal who lists the civil rights and women’s rights movements, Earth Day, the Watergate scandal, and the Vietnam War as formative events in her life. Walker, the son of a Baptist minister, is an evangelical conservative and Reagan acolyte whose hardline politics date back to his college years. Falk enjoys the backing of Wisconsin’s biggest labor unions, and negotiated concessions with the public-sector unions in Dane County; Walker sees unions as public enemy No. 1, savages their members as profane “thugs” out to bankrupt the state, and refused to negotiate over his anti-union “budget repair” bill. Falk endorsed Howard Dean in 2004; tea partiers endorsed Scott Walker in 2010.

“If Gov. Walker is able to get away with what he did to the people of Wisconsin, what he will do next if we do not defeat him will be many times worse,” Falk says.

Both the incumbent and challenger agree, though, that the stakes couldn’t be higher in the recall election. A win for Walker would validate his conservative agenda; a loss would deal a stinging rebuke to the tea party and the Koch brothers, perhaps even upping the odds of an Obama win in November. “If Gov. Walker is able to get away with what he did to the people of Wisconsin, what he will do next if we do not defeat him will be many times worse,” Falk says.

Falk, a Wisconsin native, cut her teeth in government as a so-called public intervenor, an environmental watchdog working out of the state Attorney General’s Office. After 12 years on the job, Falk won her 1997 campaign for Dane County executive, becoming the first woman to hold the position. Voters re-elected her in 2001, 2005, and 2009. When she resigned in 2011, Falk’s 14-year run as executive was the longest in Dane County history.

During that period, Falk struck a progressive stance on environmental issues. A hallmark of her time as Dane County executive, she says, was a successful seven-year campaign to install a new manure digester for the county’s cows, a $12 million venture that generates enough electricity for 2,500 homes with the manure from as many cows, while at the same time reducing harmful runoff into nearby lakes and streams. But Falk says her record in Dane County is about more than the environment, describing herself as a careful steward of taxpayers’ money who balanced the county budget 14 years in a row (as she was legally bound to do). Her critics correctly note that Falk also raised taxes each of those 14 years, though Dane County’s cumulative tax levy increase was less than most counties in Wisconsin. “I believe it’s my job to make government as efficient as possible so that you can deliver more services for people,” she says.

Then, in February 2011, Falk watched in horror as Walker unveiled Act 10, a surprise attack on organized labor that curbed collective bargaining rights for most public employee unions, made it harder for unions to recertify each year, and slashed education and health care funding, among other changes. In the weeks and months that followed, Falk slammed Walker at every turn and filed the first lawsuit challenging the legality of the bill’s passage. (Falk argued that Republicans in the state Senate didn’t have the quorum required by law to pass the bill; her suit was later dismissed.) 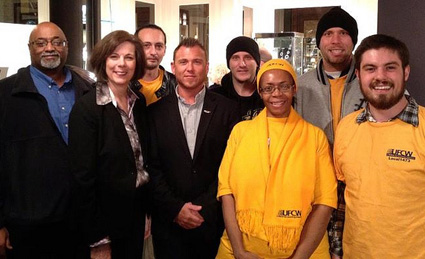 Wisconsin labor unions have rushed to support Kathleen Falk, pictured here with members of the United Food and Commericial Workers. falkforwi/FlickrIn April 2011, Falk stepped down as Dane County executive. She vacationed with her husband, former state Rep. Peter Bock, by bicycling from Florida to New York. Once back in Wisconsin, Falk says she has spent “virtually every single day” supporting the anti-Walker cause—campaigning for last summer’s state Senate recall candidates, attending fundraisers, knocking on doors, talking to citizens.

As summer drifted into autumn and Falk continued work on the effort to gather more than half a million signatures to recall Walker and Lt. Gov. Rebecca Kleefisch, her conversations around the state took on a more direct, personal tenor. “People came to me and said, ‘Falk, we’re gonna recall Walker. You need to be ready to run.'” One afternoon, a UPS deliveryman arrived at her house with a package—and a plea. It was months before she entered the recall fray. He told her, “I hope you run against Governor Walker. I’m a Republican and I voted for Walker, but he didn’t do what he said he was going to do.”

The pleas piled up, and in mid-January of 2012, Falk announced her candidacy. Her campaign, she says, is built on “openness, transparency, and honesty,” unlike Walker, who, she wrote in a December op-ed, “used a big deception to get elected” and “has continued to try to mask his extreme agenda by saying one thing but doing another.” She has pledged to restore the bargaining rights that Walker rolled back, repeal new voter ID legislation, and restore the $73 million Walker cut from the state Technical College System by ending a GOP-backed tax break for multi-state corporations.

The state’s most powerful labor unions wasted no time lining up behind Falk. SEIU Healthcare Wisconsin; SEIU’s Wisconsin state council; the American Federation of Teachers-Wisconsin; the American Federation of State, County, and Municipal Employees’ Wisconsin affiliate; and two United Food and Commercial Workers branches all decided to back her run. EMILY’s List, the national nonprofit that works to elect more female politicians, has also backed Falk. With recall spending projected to reach $100 million, and with Koch-funded Americans for Prosperity and heavyweight GOP donors opening their checkbooks, Walker will likely outspend Falk. She’ll need the unions’ money, grassroots networks, and organizing muscle in her camp to counter Walker’s millions. “We’re going to be doing everything we can to get her elected,” Palmer, the president of SEIU Healthcare Wisconsin, promises.

Paul Maslin, a veteran Democratic pollster working for Falk’s recall campaign, says he wouldn’t be surprised if the governor and his allies cast Falk as a labor stooge if she faces Walker in the general election. But Maslin downplays the liabilities from Falk’s strong union ties. He argues that whoever faces Walker in the recall will be slammed as a labor stooge, even if it’s Milwaukee’s Barrett, a popular Democrat whose relationship with unions is frosty at times. “We might as well have a candidate the unions support,” Maslin says.

“She needs to convince voters outside Dane County and southern Wisconsin that she knows something about voters in Green Bay and northern Wisconsin.”

Falk also faces charges that she can’t win on a statewide level. Her 2002 bid to be the state’s first female governor fell short in the Democratic primary, and in 2006 she lost a squeaker to Republican J.B. Van Hollen in the race to be attorney general. Falk’s critics who question her electability point to that 2006 loss. In a banner year for Wisconsin Democrats, Falk came up short, if only by 8,859 votes out of 2.1 million cast. Falk and her supporters counter that she received more votes in 2006 than Barrett did in his losing gubernatorial run four years later.

Perhaps the steepest challenge for Falk, though, is wooing voters beyond Madison, an enclave of progressive politics that outsiders describe as “85 square miles surrounded by reality.” A recent Marquette University poll showed that 47 percent of respondents didn’t know enough about Falk to have an opinion. (A separate survey (PDF) by left-leaning Public Policy Polling found that 27 percent were undecided.)

Charles Franklin, a political scientist at Marquette University who conducted the Marquette poll, says Falk’s apparent lack of name recognition statewide, despite her 2002 and 2006 campaigns, can be interpreted for good and bad. “It points to a weakness, in that she needs to reintroduce herself to the state,” Franklin says, “but it’s also a strength—that even with a relatively high don’t-know rate, she’s still competitive with Walker in the polling.”

Indeed. Falk beat Walker 48 percent to 47 percent in PPP’s February poll, and trailed him 49-42 in the January Marquette University poll. Looking to June, Franklin says, Falk’s path to victory means entails racking up big wins in Dane and Milwaukee counties, the state’s Democratic strongholds, and then winning the swing counties in the northeastern and western parts of Wisconsin that Barack Obama won in 2008 but swung Republican in 2010. “She needs to convince voters outside Dane County and southern Wisconsin that she knows something about voters in Green Bay and northern Wisconsin,” he says.

What’s painfully obvious in every recall poll is the polarization of Wisconsin voters. Roughly 47 percent of voters want Walker out, while roughly 47 percent support and believe in him. Maslin, the pollster who works for Falk’s campaign, says it’s the remaining 6 percent of voters who will decide the election. Those 6-percenters, Maslin says, “have no reason to make a judgment now, and they’re going to wait until the last possible minute. When they do vote,” he continues, “they’ll leave all the stuff aside, whatever they thought of this recall originally, all the noise and the back and forth, and they’ll make a judgment about who do they trust. That’s where I think she’s going to have an ace in a hole.”