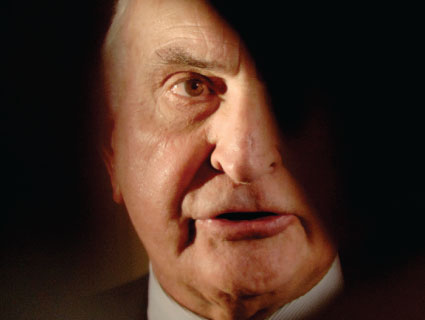 On November 1, more than 100 wealthy political donors, including former New York Stock Exchange CEO Dick Grasso, streamed into the luxurious Conrad Suite at the Waldorf-Astoria on Manhattan’s Park Avenue for a lunchtime fundraiser. The event was a smashing success, raising six figures for Mitt Romney—three times what had been expected. Save for the candidate himself, no one could have been more pleased than Ken Langone, the legendary investment banker who had organized the fundraiser and who, armed with a fat Rolodex and the pugnacity of a by-the-bootstraps billionaire, wants nothing more than to defeat Barack Obama in 2012.

The 76-year-old Home Depot cofounder looks how you’d imagine a self-proclaimed “fat cat” might: tall, broad-shouldered, and jowly, with a crown of white hair and a penchant for crisp collars. Langone, who dug ditches as a young man, is a legend in corporate America, and his vast network of business titans could prove crucial to Romney if he faces the cash-flush Obama political machine. (At the start of this year, Obama had raised $88 million to Romney’s $32 million.) “You’d be hard-pressed to find a major CEO that wouldn’t take his call,” says his friend Anthony Carbonetti, a former bundler for Rudy Giuliani. “Everyone takes his call—because they want to know what he has to say.”

Langone is a prodigious donor, having given millions to New York University and New York City charities, including the Harlem Children’s Zone. He’s also given hundreds of thousands to conservative groups, like the Republican National Committee, Karl Rove’s American Crossroads super-PAC, and the American Action Network, the dark-money outfit run by former Minnesota Sen. Norm Coleman. Langone strongly backed his friend Ross Perot for president in 1992 and was a bundler for Giuliani in 2008.

Recently, Langone has embraced a new role as an unabashed critic of the president. Last summer, after the White House and Congress (whose members Langone compared to “sex fiends” when around money) clashed over lifting the federal government’s debt ceiling, Langone branded Obama “petulant” and “unpresidential” on CNBC. He even ripped the president for entering the Oval Office without a suit jacket on—something, Langone insisted, Ronald Reagan never would have done. (PolitiFact rated this claim “mostly false”; Reagan sometimes wore track jackets in the Oval Office on weekends.) Obama is “not bringing us together,” Langone said. “Divide us and we all lose. This has got to stop.”

Before getting behind Romney, Langone spearheaded the effort to draft New Jersey Gov. Chris Christie, and as Politico reported, he brought together “50 of the most prized donors” for a conference call to urge him to run. Christie declined, but he noted that if he did challenge Obama, he’d have no problem raising money.

Langone says that since he threw his lot in with Romney, he’s helped bring 90 percent of the megadonors on the Christie conference call into the Romney camp. “I would say virtually everybody who tried to persuade Christie is partial to Romney,” he told me when I reached him at his winter home in North Palm Beach, Florida. “Don’t forget: It’s the art of the possible, not the impossible,” he said. “Romney appears to be the likely candidate for the Republican Party.”

This kind of realpolitik speaks to Langone’s political pragmatism. He’s no right-wing ideologue, and he occasionally sides with and donates to Democrats, like New York’s Rep. Carolyn Maloney and Sen. Charles Schumer. He served on the transition team of New York Gov. Andrew Cuomo, whom he called “one of the greatest governors I’ve seen—ever” because of his “practical,” pro-jobs agenda. And last summer, Langone said superrich people like himself should pay more in taxes to help to pay down the national debt. “We’ve gotta take some pain,” he told Lou Dobbs on the Fox Business Network.

But Langone also has a cutthroat, no-holds-barred side. In 2004, then New York Attorney General Eliot Spitzer came after Langone, a director at the New York Stock Exchange, for approving a massive $140 million payout for Grasso, the NYSE’s recently departed CEO. Langone, who had already left the NYSE due to the furor, developed an abiding resentment of Spitzer. “I’m nuts, I’m rich, and boy, do I love a fight!” he thundered about Spitzer to Fortune‘s Peter Elkind. Alex Gibney’s documentary Client 9: The Rise and Fall of Eliot Spitzer intimates that Langone had a role in Spitzer’s downfall amid a prostitution scandal in 2008. Langone firmly denies this, but the film leaves no doubt about his withering intensity.

Will Langone bring the same animosity to his fight against Obama? When I spoke with him, he emphasized that his opposition to the president was strictly business: Obama had created an anti-business climate in the country. “This man,” he declared as he headed out for a haircut, “has failed horribly.”