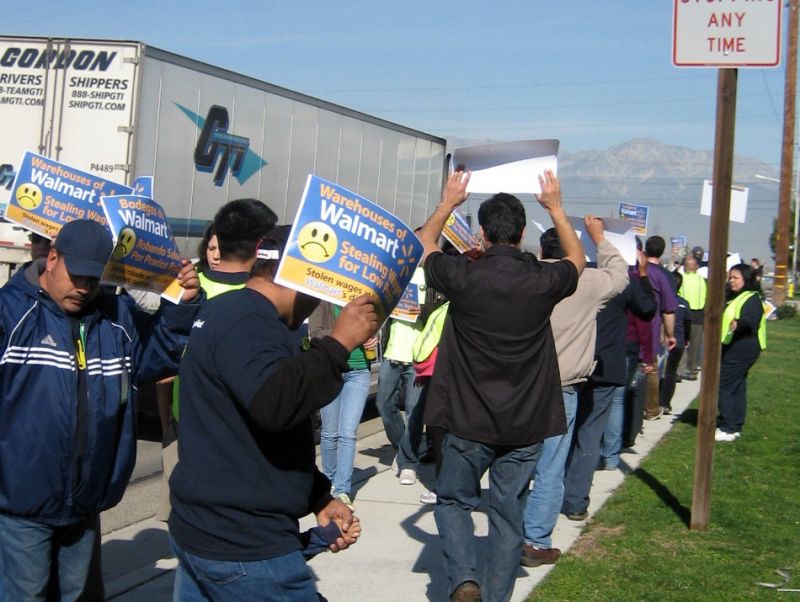 As if running around a warehouse 10 hours a day, 6 days a week, in sweltering heat, to move an absurdly large quantity of dildoes, toilet paper, and baby food—as Mac McClelland did while working for an onine shipping giant—weren’t bad enough. Try doing it for less than minimum wage.

Workers at a Walmart warehouse in the Inland Empire in Southern California were sometimes paid as little as $3 to $4 an hour, according to former crew leader Jorge Soto, who says he was ordered to falsify employees’ time sheets to cheat them out of fair pay. Workers at this warehouse and two others in the area have filed a lawsuit that claims, among other things, that they were forced to sign blank time sheets which supervisors would then fill in with less than half of the time actually worked, according to a new investigation by Lilly Fowler for the nonprofit news organization FairWarning.org.

The warehouses in question are run exclusively for Walmart. The retailer, however, isn’t named in the suit because the warehouses are operated by an outside contractor called Schneider Logistics, which in turn subcontracts its hiring to two staffing companies—Impact Logistics and Premier Warehousing—an arrangement that helps to cushion Walmart from liability.

Among the alleged indignities, large and small, workers claim they were required to show up every day only to be sent home without compensation when they weren’t needed, told that they would be blackballed from the industry if they raised questions, and even compelled to pay $1 a week to rent a company-branded shirt. Notes Fowler:

Some support for the workers’ complaints has come from an investigation by California labor authorities. October inspections at Schneider warehouses in Riverside County, which together with San Bernardino County forms the Inland Empire, “confirmed stories of abuses in the warehousing industry that must stop,” Julie A. Su, the California labor commissioner, said in a news release.

Based on the inspections, state authorities proposed fines against Impact and Premier of more than $1.1 million. They accused both companies of failing to provide properly itemized wage statements, leaving workers unaware of what they were being paid for their piece work.

“Employers cannot simply make up a piece rate and change it at their whim,” Su warned.

Read the full story at FairWarning.org.