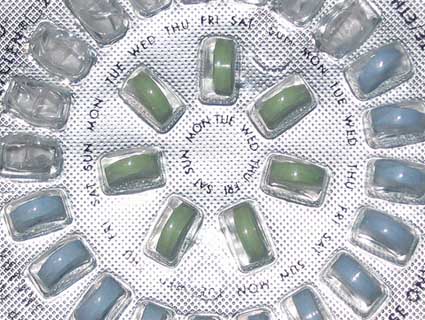 Rush Limbaugh called Sandra Fluke, a Georgetown student, a “slut” for her public advocacy in support of the Obama administration’s rule compelling employers and insurance companies to cover birth control in their health care plans. Fluke thought that kind of language was out of bounds, and said so. Over at National Review, Kathryn Jean-Lopez posts an “alternate perspective” from Angela Morabito, one of Fluke’s classmates.

Like Rush Limbaugh, Morabito (and possibly Jean-Lopez) appears to believe the amount of birth control you need is related to how much sex you have:

No one forced Sandra to come to Georgetown. And now that she has, Sandra does not have to depend on the university health plan. She could walk down the street to CVS and get some contraception herself. Or, go to an off-campus, non-university doctor and pay for it out of pocket. (Or, you know . . . maybe not have so much sex that it puts her in financial peril?)

Limbaugh is apparently not the only person on the right who appears to be clueless about how birth control actually works. Except for the morning after pill, how much birth control you need has nothing to do with how often you have sex. Fluke’s testimony is focused on alternative medical reasons for taking contraception, of which there are many, but like Limbaugh, Morabito spends a great deal of effort pontificating about Fluke’s sex life and implying she is promiscuous. Instead of the word “slut,” however, Morabito goes with the classier “When did Georgetown Law start admitting Kardashians?” and posits that “Sandra doesn’t even speak for all skanks! She only speaks for the skanks who don’t want to take responsibility for their choices.”

Fluke never mentions her own sex life in her testimony, so people attacking her for doing so lack even the flimsiest of pretenses. They’re speculating about Fluke’s sex life because they think the most effective way to silence her is through a sustained carpet bombing of sexist stereotypes.

Kathryn Jean-Lopez doesn’t speak for everyone at National Review, however. Though her colleague Jason Lee Steorts does not endeavor to correct the misconceptions about birth control in Morabito’s piece, he nevertheless responds that, “Maybe [Morabito] was trying to be funny, but instead she conveys arrogance, condescension, and a total lack of manners.” Steorts argues that conservatives should stick to their arguments regarding religious freedom. I don’t find those particularly persuasive either, but it says something that so many people can’t seem to resist getting personal when it comes to Fluke.