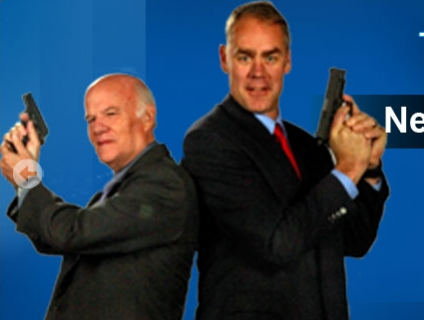 According to his official campaign bio, Montana Republican gubernatorial candidate Neil Livingstone has, at various points during his illustrious career as a Washington-based security consultant, “dined at gangster clubs in Moscow and in the back rooms of Georgian and Uzbek restaurants with members of the Russian Mafia”; “been stalked by terrorists and Nazis in Argentina”; “been paid in stacks of $100 bills by clients”; and held “a business meeting with a six-and-half foot tall pink-eyed albino dressed in white from head-to-foot in a Miami-area motel with the peculiar distinction of having more ‘floaters’ in its pool than any other hospitality establishment in the U.S.”

But it was the line about spending time aboard a pirate ship filled with hookers during the Monte Carlo Grand Prix that landed him in a spot of political trouble. In March, local blogger Montana Cowgirl got wind of the flooze cruise, and it quickly went national. Livingstone purged the item from his bio and attempted damage control, explaining to an Associated Press reporter that his wife had accompanied him and, anyway, he was on official business. When in Monte Carlo, right?

Livingstone, 65, probably won’t be Montana’s next governor. In head-to-head match ups, he trails GOP front-runner Rick Hill, a former congressman, and likely Democratic nominee Steve Bullock. And he has struggled to raise money. But his long-shot candidacy to replace term-limited Democrat Brian Schweitzer has drawn attention because of his less-than-orthodox past.

A ubiquitous presence on the DC scene, Livingstone has made his share of cameos in newspaper stories about spook-filled rooms. The Washington Post once described his style—crisply tailored suit, Turkish worry beads, three gold rings—as “more invented than real, like a character in an Arnaud de Borchgrave novel.” In 2005, Roll Call dubbed Livingstone “Deep Mouth,” after it was alleged that he had dined at Dupont Circle’s Palm steakhouse 88 times in a 57-day period. (Livingstone denied the charge, telling the paper that he eats there only about 15 times a month.)

Although he’s spent much of his life with an inside-the-Beltway mailing address, Livingstone boasts deep Montana roots. He grew up in Helena, where as a high school student he once made $200,000 selling a coin collection he’d picked up for a bargain at an estate sale. With the proceeds, he bought a Ferrari. Livingstone moved east for college at William & Mary, worked as a mostly anonymous Capitol Hill staffer for a few years under Sen. Stuart Symington (D-Mo.) and moved back to Missoula with his wife to get his master’s degree in political science. Then he returned to Washington, where, after a second stint on the Hill, he got a job in the mid-1970s as the vice president of Air America, the CIA-owned airline that played a critical role in the agency’s covert anti-communist operations in Laos and elsewhere. He later purchased, with four partners, Air Panama, and from there he moved to stints at various security companies.

During the Iran-Contra affair in the Reagan years, Livingstone was subpoenaed by Senate investigators after the business card of one of his employees, Robert Owen, was found in a Nicaraguan cargo plane that had been shot down. Owen, who worked under Livingstone first at the PR firm Gray and Company and then at the Institute on Terrorism and Subnational Conflict, was North’s “courier” to the Reagan-backed contras, who were trying to topple the socialist Sandinista government of Nicaragua. Owen was ferrying cash to the rebels from a White House safe and facilitating arguably illegal arms purchases. (Livingstone, who was a consultant to the National Security Council at the time, was absolved of wrongdoing and has said that Iran-Contra mastermind Oliver North, who was convicted of using proceeds from Iranian weapons sales to support the contras, misled him.)

If he didn’t run weapons to the contras, Livingstone rarely missed a chance to make a buck off global instability. As Harper‘s Ken Silverstein reported, Livingstone was a vocal advocate for regime change in Iraq as early as 1993, when he called for covert action to take out Saddam Hussein. The eventual US invasion 10 years later, championed by Livingstone, yielded substantial financial rewards for his firm, GlobalOptions, which consulted on private security for businesses looking to invest in Iraq.

In 2006, Livingstone left GlobalOptions, where he had served as chief executive, to start a new security company called Executive Action, which takes its name from the CIA’s euphemism for assassination. “Think of us as a McKinsey & Company with muscle, a private CIA and Defense Department available to address your most intractable problems and difficult challenges,” Livingstone said in a statement introducing the new company.

Although he refrains from speaking publicly about his clients, a 2007 lawsuit initiated by GlobalOptions revealed that his new firm represented the daughter of Uzbekistan dictator Islam Karimov, as well as the family of Viacom mogul Sumner Redstone. Through Executive Action, Livingstone sponsored a panel to boost the MEK, an Iranian dissident group—and alleged cult—that the US considers a terrorist organization. “There are a few cultlike aspects to them,” he told The New Yorker‘s Connie Bruck, “but I like them because they bug Iran.”

In March 2011, while both the American-led attacks against Moammar Qaddafi in Libya and Livingstone’s gubernatorial campaign were underway, Livingstone and a handful of partners hatched a scheme to help Qaddafi flee the country in the hopes of bringing a more peaceful resolution to the country’s civil war. Unsurprisingly, the plan, contingent on a $10 million retainer from Livingstone and his partners, and approval of the Treasury Department, was scrapped.

In addition to consulting and executing top-secret missions for the government, Livingstone became a prolific writer. He contributed frequently to the mercenary rag, Soldier of Fortune and authored nine books, including 1997’s Protect Yourself in an Uncertain World, which offered security advice on a range of scenarios, including the propositioning of prostitutes. (Avoid threesomes, he advised, because “double pleasure can be double trouble.”)

Livingstone’s most infamous contribution to the American national security debate may have been one line in a 1986 article for World Affairs on the efficacy of death squads. He stressed that he was morally opposed to mass murder, but Livingstone acknowledged that there was a time and a place for such excessive measures. “In reality, death squads are an extremely effective tool, however odious, in combating terrorism and revolutionary challenges,” he wrote. The larger problem, Livingstone argued, was one of optics—he quoted a former US intelligence officer who suggested the El Salvadorans should stop leaving bodies on the side of the road because “they have an ocean and they ought to use it.”

Montana has what’s been called a “colorful history” of conservative candidates. In 2006, Democrat Jon Tester knocked off incumbent GOP Sen. Conrad Burns with help from third-party challenger Stan Jones, whose skin turned blue-gray after he drank a concoction of ionic silver as a preventative measure against post-Y2K tap water. The GOP’s 2002 senate nominee, lapsed hair stylist Mike Taylor, grew a mustache and began wearing round, wire-rimmed glasses in an effort to play up his resemblance to Teddy Roosevelt. But Livingstone’s cloak-and-dagger background puts him in a new league.

Livingstone’s only previous experience in representative governance came as the head of the Watergate South co-op board, where, the Washington Post reported in 2003, he oversaw an ambitious but controversial renovation effort requiring the installation of “$180,000 worth of $50-a-yard English Axminster wool carpet accented by $100,000 worth of Taiwanese marble.” He lived in a condominium there with his now-separated wife, Susan, an undersecretary of the Navy; a poodle named Bomber; and an extensive collection of vintage weaponry.

Montana voters, if the polls are any indication, haven’t yet been won by Livingstone’s Bond-like pitch. And there have been some unforced errors, as well. At the unveiling of their new campaign bus, Livingstone’s running mate, state Sen. Ryan Zinke, a onetime member of the Navy’s elite Seal Team Six, who was at the wheel, “slowly ran into a Helena supporter’s 1964 sky blue Chevrolet Camaro convertible,” according to the Missoulian. Livingstone’s first campaign finance filing revealed just one donor from the state of Montana (a small arms developer from Fort Harrison) and noted that he had spent most of his money out of state—including four itemized disbursements in Lima, Peru (for design work).

Craig Wilson, a political science professor at Montana State University-Billings, is equally confused. “I can’t think of another [candidate], at least in terms of recent history, who lives out of state and basically just parachutes into the state and says, ‘I’m back and I’m running for a major office,'” says Wilson, who remembers Livingstone from his days in Missoula. “It’s very unusual. He’s a bright guy, and the only thing that comes to my mind is that he’s sort of tilling the soil in terms of name recognition and maybe he’s got some idea of running for office in the future.”

Yet Livingstone is doing his best to thrive in a place where the biological threat du jour is diseased livestock, not ricin. “This is a Brucellosis-free state,” he told Republicans at a debate in Great Falls in February. “And I pledge to you that we’re gonna keep it that way if I have to stand on the border of Yellowstone Park and shoot the first bison that comes wandering.”

Given his record, could you really doubt him?