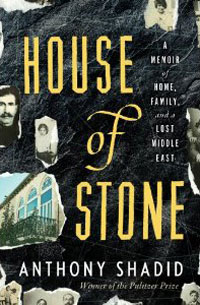 House of Stone: A Memoir of Home, Family, and a Lost Middle East

In his New York Times dispatches from across the Middle East, Anthony Shadid—a two-time Pulitzer Prize winner—cuts a swashbuckling figure. In the last year alone, he braved tear gas and live fire in Egypt, was kidnapped by Qaddafi’s thugs in Libya, and secretly traversed Syria’s killing fields by motorcycle. House of Stone casts the correspondent in a softer light, recalling his 2007 return to his ancestral village in southern Lebanon to rebuild his great-grandfather’s abandoned home—and perhaps piece together his own wayward life in the process. At once outsider and native son, Shadid elegantly reflects on the violent splintering of the once-vibrant Levant and its uphill struggle to reclaim its dwindling notions of regional identity.

Editor’s Note: Anthony Shadid died of an asthma attack in February while reporting for the New York Times inside Syria. Shortly before his death, he spoke with Mother Jones about House of Stone, Syria’s future, and the high cost of getting the story in a war zone. You can read Shadid’s interview with Mother Jones here.