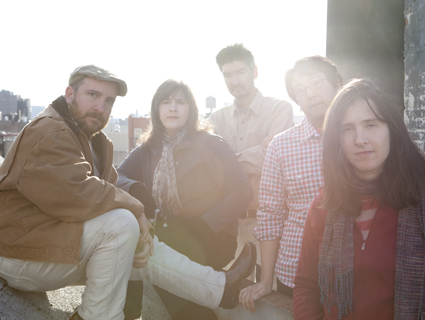 Since 1991, when The Magnetic Fields released the first of their 11 albums to date, the iconic pop group has created a singular genre of ultra-sincere yet superbly tongue-in-cheek love songs. Nothing exemplifies this better than three-volume concept album 69 Love Songs, an ode to cliché that ranges from the heartbreaking (“All My Little Words”) to the supremely silly (“Let’s Pretend We’re Bunny Rabbits”) all in, you guessed it, 69 tracks. Their music has always been firmly rooted in ideas of nostalgia—doing drugs, going to bad parties, cruising aimlessly in cars, and, most of all, reflecting on love or love lost between girls and girls, girls and boys, or boys and boys, if never their grown-up counterparts.

As they’ve grown older, this nostalgia has felt increasingly hollow—irony has overpowered their earnestness, and the more sincere songs end up sounding like shells of ones already written. At first listen, their newest album, Love at the Bottom of the Sea, seemed to fall quickly into this category. But after seeing their incredible live show at Oakland’s Fox Theater (part of a two-month tour) and hearing some of their new material performed seamlessly alongside past hits, I decided to give it another shot. Upon relistening, I realized that Love at the Bottom of the Sea is actually, in many ways, a genuine attempt at a new direction for a band too often pigeonholed by those overeager to hear the next laugh-cry over some lost love or another.

For starters, it features the heavy use of synthesizers—the end of their self-imposed “no-synth trilogy” began with 2004’s i. It also dispenses with the overarching concept, a device the band has used, perhaps a bit heavy-handedly, throughout its decades-long career. Unshackled from these sizable constraints, the Magnetic Fields don’t exactly take things to unforeseen heights, but you get the sense that they are eager to stick around for a while yet.

That said, the new album’s main merits are contained in a few strong stand-alones. “Andrew in Drag” deserves a spot on some future career-hits album, showcasing the band’s humorously maudlin style: “A pity she does not exist, a shame he’s not a fag / The only girl I ever loved was Andrew in Drag.” Other highlights include the delightfully snippy “Quick!”—perhaps their best reintroduction of synth on the album—and the ode to simplicity, “Goin’ Back to the Country.” These standouts, however, are scattered between tracks that often sound like self-mockery or as if the band is simply not trying very hard. But I’m still optimistic. They seem to be gathering momentum in a direction that could truly reinvigorate them—and the first push is always the hardest.