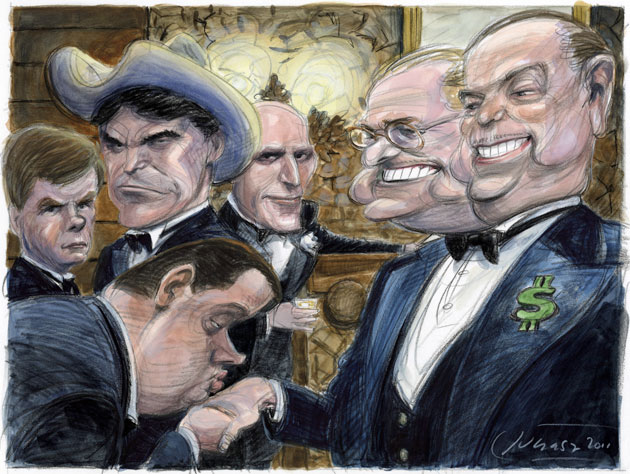 On a gorgeous weekend last June, hundreds of America’s wealthiest conservatives descended on the Ritz-Carlton, Bachelor Gulch, outside Vail, Colo. The head of a 14-point elk watched impassively from atop a stone fireplace as the guests made their way into a lobby framed by massive wood beams and appointed with plush leather sofas. The entire four-star, 180-room alpine resort was theirs for the weekend, booked in advance by the billionaire industrialists Charles and David Koch for the brothers’ hush-hush strategy “seminar” and fundraiser.

The guests’ name tags bore monikers that would be familiar to anyone involved in political fundraising. Though the Vail guest list is a jealously guarded secret, the Koch network includes Rich DeVos, cofounder of Amway, owner of the Orlando Magic, and a prolific donor to Focus on the Family and other conservative causes; John Childs, a “notoriously media-shy” Boston private-equity guy who’s worth an estimated $1.2 billion and last year doled out $750,000 to outside expenditure groups like Karl Rove’s American Crossroads; Diane Hendricks, a billionaire roofing-supply magnate who joined the Kochs in supporting Wisconsin Gov. Scott Walker’s recent attacks on public-sector unions; and Charles “Talk to Chuck” Schwab, who along with his wife, Helen, has given more than $330,000 to the Republican Party and its candidates since March 2010—and not a penny to the Democrats. The sort of people who would see nothing amiss about paying $9.05 for a hard-boiled egg from room service.

Flitting among such masters of the universe was a quartet of GOP governors drawn by the sweet smell of campaign cash. Of the four—Chris Christie of New Jersey, Bob McDonnell of Virginia, Rick Perry of Texas, and Rick Scott of Florida—only McDonnell saw fit to disclose the trip on his public calendar.

If the June 2010 Koch (pronounced “coke”) seminar in Aspen, Colo., was any measure, the fortunate few could expect a rousing weekend of workshops, lectures, and panels with titles like “Understanding the Persistent Threats We Face,” “Winning the Fight Between Free Enterprise and Big Government,” and “Is America on the Road to Serfdom?” But this year, the real focus was making Barack Obama a one-term president.

After settling into rooms featuring custom millwork, feather beds with 400-thread-count linens, and “premium dog bowls” for canine companions, on Sunday evening the attendees were herded outside, where, in the shadow of Beaver Creek Mountain, they broke bread inside a pavilion bedecked with flowers, colored lights, and glittering chandeliers. Audio technicians set up speakers around the perimeter and blasted out static to deter eavesdroppers. (Presumably the attendees were admonished, as they had been in Aspen, not to blog, tweet, or leak information about the event.) As guests tucked into a repast catered by Wolfgang Puck’s Spago, Charles Koch took the stage.

He welcomed his comrades with a warning of the peril facing the nation. Alluding to the 2012 election, he invoked Saddam Hussein and declared, “This is the mother of all wars we’ve got over the next 18 months, for the life or death of this country.” A spokesman from Koch Industries later denied that the Saddam comment referred to Obama.

“This is not pressure,” Koch went on, preparing to acknowledge 32 individuals and families who had given more than a million dollars each in the past year to the “Kochtopus”—what political insiders call the network of advocacy groups the brothers have employed in their discreet attempt to shape American political life to their whims. He admitted that the million-dollar club actually had 42 members; the other 10 “will remain anonymous, including David and me,” he quipped. “We’re very humble.”

The crowd went wild when David Koch introduced Christie, the dinner’s headliner, mentioning how they’d spoken a few months before the governor proclaimed New Jersey’s unilateral withdrawal from a 10-state carbon-trading pact that would cost the Koch brothers’ privately held oil, paper, and chemical conglomerate—a major polluter—loads of money. But by and large he stuck to familiar terrain: telling funny stories about sticking it to Democrats and pandering to his audience with platitudes that wouldn’t have been out of place at a liberal fundraiser. “If we’re going to win this fight, it’s the people in this room that are gonna win it,” Christie promised. “We cannot let our children down. We cannot let our country down. We cannot let the world down…We are Americans, and we are built for greatness.”

But all the speechifying was merely a prelude to the “ask.” Before sending his guests off to relax at the Buffalo Bar the following evening, Charles Koch brought it all back around. “As I’ve said, the mother of all battles [is] coming up a year from November,” he said. “And I pledge to all of you who’ve stepped forward and are partnering with us that we are absolutely going to do our utmost to invest this money wisely and get the best possible payoff for you in the future of our country.”

Of course, Koch wouldn’t have known that his conclave was being secretly recorded. Or that afterward, the mole would approach blogger Brad Friedman with the sound files. Or that Friedman would deliver them to Mother Jones, and that the world would eventually find out precisely what the Kochs had said, and whom their largest donors were.

The story broke on a Tuesday. By that evening, a message from Obama’s 2012 campaign citing Charles Koch’s “mother of all wars” comment was landing in inboxes across America. “If that offends you, it absolutely should,” the email read. “But it should also motivate you, because you are the only thing that can stop them…Can you make a donation of $75 or more right now?”