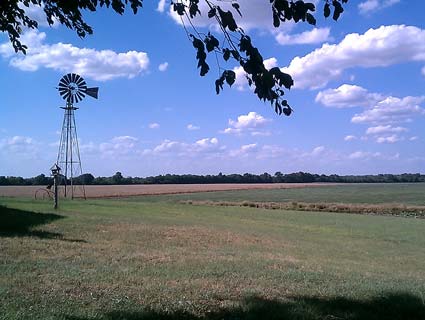 The debate over the Keystone XL pipeline has moved from the White House to a farm in Texas. Third-generation farmer Julia Trigg Crawford is engaged in a court battle over whether TransCanada, the company that wants to build the massive pipeline from Canada to Texas, has a right to declare eminent domain on a portion of her family’s farm.

Earlier this week, TransCanada announced that it intends to move forward with the portion of the Keystone XL pipeline that extends from Oklahoma down to Texas. This 485-mile-long portion of the pipeline doesn’t cross international borders, which means it won’t need approval from the State Department or President Obama. But it does cross right through Red’Arc Farm, which Crawford and her family own.

The farm is in Direct, Texas, a small town about 20 miles northwest of Paris (city notable for it’s own 65-foot-tall replica of the Eiffel Tower, complete with a cowboy hat on top). Along with her father, sister, and brother, Crawford, 53, tends to her soybeans, wheat, corn, orchards, and cattle on this 600-acre property where the Red River and Bois d’Arc Creek meet. Her grandfather bought the land in 1948, and Crawford currently lives in the farmhouse.

Back in 2008, the family got notice that TransCanada was interested in running a pipeline through a 30-acre pasture area. Crawford says they were first offered $7,000 for use of the land, though the figure later increased to $20,000. The Crawfords weren’t entirely opposed to having a pipeline run through the farm since there are several others running through the county. “Pipelines are not foreign here,” Crawford says. But then an initial archeological assessment of the property conducted by a firm the company hired found that the portion of the pasture the company was first interested in was full of artifacts left by the Caddo, a local American Indian tribe. That was not a big surprise to Crawford. “I pick up pieces of pottery all the time when I walk the dogs,” she says. She keeps the bits of pottery and arrowheads she finds in a large jar.

So the company proposed an alternate route through another corner of the same pasture, hoping to avoid the archeological site. But according to the next inspection the archeological firm undertook, there were no artifacts in this new corner. That the second dig turned up nothing made Crawford suspicious, and she decided to get an independent survey of the site—which again turned up quite a few artifacts. She hoped that the reports would force TransCanada to pick a new route, but she says the company insisted on going right through the pasture. “They said if you don’t sign the easement we have the right to condemn the land and take it through eminent domain,” she said.

She had other concerns about the pipeline, like the repercussions of a spill or the impact building the line might have on her ability to use the pasture. She says she tried to talk to the local contact person for the company and asked for concessions like thicker pipe metal, deeper burial, and assurance that her family would be compensated if the pipeline spilled into the creek they use for irrigation. The company didn’t offer any concessions, she says, and instead took the Crawfords to court last fall to claim eminent domain on the property. (The company has taken a similar tack with landowners in Nebraska as well.)

That tipped off a legal battle that’s still ongoing. For one, Crawford believes that she and her family were never offered a fair price for their land. And for another, she thinks that the archaeological and historical value of the land outweighs the desire of a private company to dig through it. But the main reason she’s fighting eminent domain on her land is that she doesn’t think TransCanada has a right to declare it. Under Texas law, pipeline regulation is handled by the Railroad Commission. But the commission “does not have the authority to regulate any pipelines with respect to the exercise of their eminent domain powers,” it states on its website. So if a company is building an oil or gas pipeline in Texas, it’s generally able to declare eminent domain on any route it wants.

But Crawford argues that there should be some kind of demonstrated public good before a private company can seize her land—or at least a state agency that has some oversight power. She’s hoping to challenge TransCanada’s claim that it can take the property when they go to court in April—particularly since the company doesn’t yet have all the permits necessary to start construction. “A foreign-owned, for-profit, nonpermitted company has been allowed by loopholes to condemn my land,” she says. “It’s about landowner rights.” Her story gotten quite a bit of press coverage in the last week, and she’s launched an internet petition that has drawn more than 15,000 signatures of support.

TransCanada has vowed that it won’t let Crawford stand in the way of the pipeline. “We are not going to have one landowner hold up a multibillion-dollar project that is going to be for the benefit of the public,” the company’s lawyer told the court in their Feb. 17 hearing, according to Reuters. “They’re entitled to their day in court, but they’re not going to be able to stop the pipeline project under (Texas law).”

Last week, a judge waived the restraining order that Crawford had requested against TransCanada, so now she worries that the company might start laying the groundwork for the pipeline at any moment. “We’re all looking out the window every hour.” For now, though, she’s waiting for their next round in court.