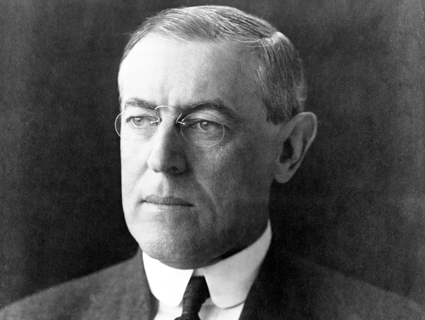 Rep. Allen West has been on a tear recently trying to defend his assertion that liberal Democrats are actually communists. West’s argument focuses not on Democrats’ commitment to the dictatorship of the proletariat or the elimination of private enterprise, but the fact that Democrats generally support public assistance and regulation of private industry.

All of this is ridiculous, but perhaps my favorite West assertion of late is the idea that President Woodrow Wilson was a communist. Here is Mr. West’s reasoning, as relayed by TPM’s Eric Kleefield:

So Wilson described himself as progressive, and progressive just means communist, so Wilson was a communist. This is fifth-grade logic.

Tim Weiner’s excellent history of the FBI goes into great detail about Wilson’s record on communism, but here are a few examples of how President Wilson, in real life, dealt with self-identified communists and socialists:

How many communists do you have to kill and/or throw in prison to not be considered a communist? It’s not like Wilson lacks for actual flaws either, given that he was a huge racist and Confederate sympathizer, among other things.

At this point, you’re probably thinking that Wilson, the self-identified progressive, might be better described as an anti-communist than a communist. But that’s because you’re not looking at the big picture. Wilson’s assault on civil liberties eventually resulted in the formation of the American Civil Liberties Union, which—I’m about to blow your mind—was obviously the plan all along.

Partisan derangement is usually directed at a president currently in office; West is gifted in the sense that he’s able to maintain a right-wing fever swamp perspective on a president elected a hundred years ago. But if a guy who locks up communists for protesting wars can’t catch a break because he supports a federal income tax, the House Progressive Caucus probably doesn’t have much of a chance either.