With right-wing commentators like Rush Limbaugh selling climate change as a vast left-wing conspiracy you might imagine that Americans couldn’t be bothered to try and stop our planet from boiling. Thankfully, that’s not true, according to a Yale/George Mason University poll released yesterday.

The poll finds that a majority of Americans—63 percent—think the US should act to reduce greenhouse gas emissions now. That’s even if other countries don’t take any action. Surveying some 1,000 Americans, the poll found that only five percent of respondents believe there’s no need to reduce emissions at all (see chart below). “Clearly, reports of the death of public support for action on global warming are overblown,” wrote Ruy Teixeira at the Center for American Progress, in response to the poll.

What’s more, the survey found, 65 percent of Americans support cutting greenhouse gas emission levels by 90 percent by 2050. That’s huge. Sixty-three percent of those polled also said they wouldn’t mind a utility bill price hike if it meant companies would be forced to source a portion of their energy from renewables.

It’s too bad the talking heads are so out of touch with the rest of us. 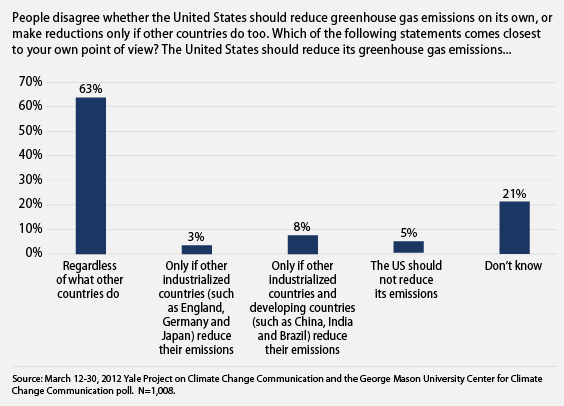