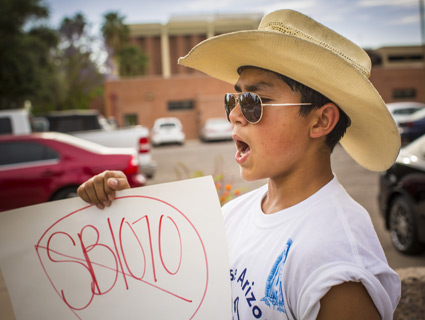 Almost two years ago to the day, activists in Arizona assembled in front of the state capitol in Phoenix to protest SB 1070, the harsh immigration law that the Supreme Court heard oral arguments about on Wednesday. The activists’ 100-day vigil signaled a growing political awakening of Arizona’s Latino residents—a shift that could affect the outcome of this year’s election and many more to come. If the Supreme Court allows the Arizona law to stand, activists say, it could trigger an even greater shift in Latinos’ attitudes.

“If the Supreme Court gives Arizona the green light to legitimize discrimination and racial profiling, it’s going to mobilize Latinos in an unprecedented way in the 2012 election and beyond,” says Frank Sharry, the executive director of the pro-immigration reform group America’s Voice. “I think it’ll be a defining moment.”

Immigrant rights’ activists say they’ve seen this story before. In 1994, while running for reelection, California Republican Gov. Pete Wilson supported a ballot referendum, Proposition 187, that would have ended access to any public services for undocumented immigrants and directed local law enforcement to question anyone suspected of being in the country illegally. Wilson and Prop 187 won handily. A federal court found the law unconstitutional, and it never actually went into effect. But political scientists credit the fight over Prop 187 with turning the state of California solidly blue by making Latino voters in the state overwhelmingly Democratic.

Before Prop 187, “except for the Lyndon Johnson-Barry Goldwater debacle, no Democrat had won a majority of California vote in a presidential election since the Second World War,” explains Gary Segura of the polling firm Latino Decisions. But the electoral landscape in the state shifted dramatically during the 1990s. Of 1.1 million new voters in California registered between 1990 and 2000, over 90 percent were Latinos, according to a study by the Field Research Corporation.

Activists on the ground in Arizona say they’ll keep mobilizing regardless of how the Supreme Court rules. Ben Monterroso, director of Mi Familia Vota, which seeks to increase Latino civic participation, got his start in politics organizing against Prop 187. He says the anti-immigrant fervor of the 1994 Prop 187 campaign drove him into politics.

“I’m the son of Prop 187,” Monterroso says. “I had relatives who were not legal status in this country yet, [I remember] how fearful they were, they didn’t know what was going to happen. I felt that in my life, and in my own experience, and nothing has taken that fear away from me, or the fear I felt at that time.” Since SB 1070, he says, he’s seen young activists in Arizona go through the same thing.

“The changes that we have seen in California, as a result of [Prop] 187,” Monterroso says, “those are the changes we are going to see in Arizona.”

The fight over the Arizona law could also serve to distract voters from other parts of Obama’s immigration record. Although Obama has deported a record number of people during his first three years in office, fulfilling a campaign promise to enforce immigration laws, the reform side of his immigration agenda lies in shambles. Obama’s attempts to pass comprehensive immigration reform and the DREAM Act—which would give immigrants brought to the country as children a path to citizenship if they go to college or join the military—both fell to GOP obstruction. By challenging Arizona’s SB 1070, which the Obama administration says violates the federal government’s constitutional authority to enforce immigration law, the president can draw a serious contrast with Republican rival Mitt Romney, who has said he would have let it stand.

The Arizona case “is a win-win for Obama no matter what the outcome is,” says Segura, the pollster. “Ironically, I think Obama’s helped more if the United States loses the case, but it’s at a huge price for Latinos, upon whom the court will have declared open season.”

There’s already evidence that the backlash to SB 1070 is having an impact.  The law’s chief architect, former Arizona state Sen. Russell Pearce, was deposed in a recall election after his attempts to pass more anti-immigrant measures were blocked by members of his own party. In 2010, Latinos in Arizona had a higher turnout rate than Latinos in any other state. A Morrison Institute poll released on Monday showed Romney and Obama within the margin of error in Arizona, with Romney leading by only two points, 42 to 40 percent. Obama lost Arizona to McCain by about nine points in 2008.

“It’s gonna be very close in Arizona, and it’s possible Obama could win here if it falls into place for him,” says Arizona pollster Bruce Merrill, who directed the poll. Other issues, such as the state of the economy, will be more decisive than immigration, Merrill says, but he still believes the SB 1070 decision and the Senate candidacy of former Surgeon General Richard Carmona could turn Arizona blue eventually, if not in 2012. “The movement in many of the western states is moving more towards convergence with California,” Merrill says.

Republicans, on the other hand, argue that the immigration issue is a wash for Obama, since he already has the Latino vote well in hand.

“The swing vote in 2012 isn’t Hispanics; it’s suburban white women, working-class white men,” one Republican strategist says. “Americans don’t believe the border is more secure. Obama can toss stats all day long. Gut matters.” In a weak economy, “gut” could certainly overwhelm the facts about illegal immigration. But the Pew Hispanic Center recently found that, because of the economic downturn, immigration enforcement measures, and an improved economic outlook in Mexico, net migration to the United States has fallen to zero.

Nevertheless, the Supreme Court seemed inclined Wednesday to uphold at least part of the Arizona law. While Obama is likely to win the majority of the Latino vote anyway, if Arizona’s law remains intact it could propel Latinos to the polls in just the kind of numbers Obama needs to win the state.

“Are Latinos sufficiently disappointed in Obama to stay home?” Segura asks. “Fear is a good mobilizer.”