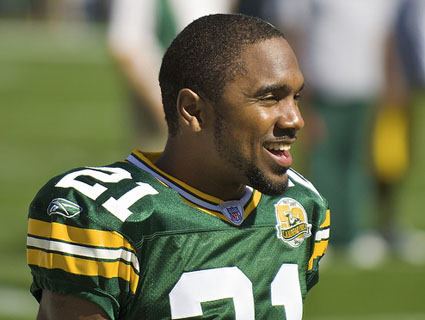 Divided as they may be, the people of Wisconsin still unite behind at least one cause: Green Bay Packers football. The “Pack” is a religion in Wisconsin, its followers fanatical, each home game at Lambeau Field awaited and attended with the fervor of a Papal visit. And unlike every other NFL team, the Pack is a nonprofit owned by the people, not some 1 percenter friendly with Mitt Romney.

It was no surprise, then, that when Packers defensive stalwart Charles Woodson spoke out in February 2011 against Gov. Scott Walker and his fellow Republicans’ “unprecedented attack” on workers’ rights, Woodson’s words reverberated throughout the state. “I hope those leading the attack will sit down with Wisconsin’s public workers and discuss the problems Wisconsin faces, so that together they can truly move Wisconsin forward,” Woodson said at the time.

In Washington on Friday, Woodson, a member of the NFL Players Association union, doubled down on his support for workers’ rights in Wisconsin. “Wisconsin workers and workers in general should have their right to be a union and have a right to fight for whatever rights they believe in,” Woodson told Politico‘s Mike Allen. “We talk about having freedoms in this country. They should have the freedom to fight for their rights.”

Woodson has yet to take a public position on the recall fight targeting Walker. Nor, for that matter, have any other members of the Pack, many of whom flee Green Bay each offseason for warmer climates. But if Woodson or any of his teammates do weigh in on the recall rumble before the June 5 election, you can bet it will tip the scale in one of the most vicious and cash-drenched elections in Wisconsin history.