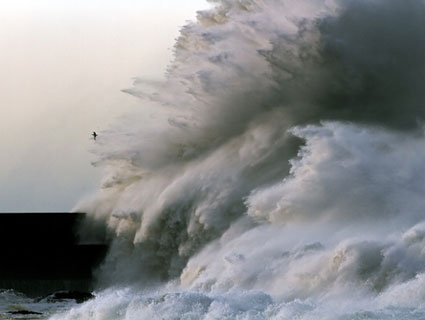 Oil and water don’t mix, but that may soon change.

A rare Senate hearing on the threat of rising sea levels last week coincided with a new report from Climate Central, a non-profit that publishes peer-reviewed environmental research, that shows rising seas may soon be lapping at the country’s oil and gas refineries, electric and natural gas power plants, and even nuclear facilities.

Climate change has raised global sea levels by eight inches since the late 19th century, amping up storm surges and flooding around the world. Extreme coastal deluges—of the sort that’s only supposed to happen once a century—are those that reach at least four feet above local high tides. The rate of this kind of biblical flooding is expected to more than double by 2030, according to the report. Check out the researchers’ map of coastal threats from rising waters in your area:

This is bad news for coastal energy facilities. The analysis, which assessed data from the National Ocean and Atmospheric Administration, the US Geological Survey and FEMA, tallied nearly 300 locations, spread across 22 coastal states, which stand on ground below that critical high tide-plus-four level. That includes 130 natural gas, 96 electric, 56 oil and gas, and 4 nuclear facilities. Here’s Climate Central‘s map of of all the at-risk locations. (You can adjust the data to show energy facilities at higher and lower flood levels.)

More than half are in Louisiana. That state can’t win.

Ben Strauss, Director of Climate Central’s Program on Sea Level Rise, and co-author of the report, who testified at the Senate hearing, says flooding of energy facilities could result in blackouts, damage to critical access roads and destruction of mechanical systems. At refineries storm surges could cause spillage, damage to storage tanks, and national oil supply shortages. Or imagine an American Fukushima, in which flood waters cut off power supplies, keeping reactors from being cooled, and triggering a nuclear meltdown.

Senator Lisa Murkowski of Alaska, the lone Republican at the hearing, called the report’s findings “a wake-up call.”

Scientists expect waters to rise 20-80 more inches this century, depending on whether the world gets it together policy-wise. Don’t hold your breath.