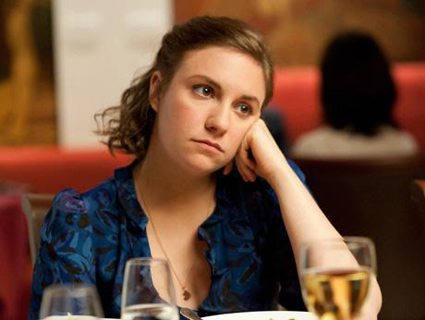 I’ll admit I was skeptical of my colleague Asawin Suebsaeng’s review of Girls, the highly anticipated new HBO series, even though I’d never seen the show. While Swin called it “as profoundly bland as it is unstoppably irritating,” the show (which premieres on Sunday night) has been hailed by feminist critics as the best thing on television today. I wasn’t sure whose opinion to trust until I remembered that Swin recently called 21 Jump Street “pop art” and gushed that American Reunion was an “enjoyable” romp whose “gross-out gags are calibrated with just enough creativity to bypass genre banalities.”

“Hipsters are really going to like this show,” Swin sneered. I’m not sure how many of the half dozen MoJo interns who gathered for post-work beer and a sneak preview of Girls the other night would identify as hipsters, but we were all girls and we all found the show highly watchable.

The most perplexing part of Swin’s dismissive review is his insistence that Girls isn’t doing anything new. Claiming the material has a “deafening familiarity,” he accuses the show of relying on “tired tropes” and “recycled pathos.” If so, I’d like to see the shows he’s been watching. It’s one thing to argue that the jokes fall flat; it’s another to deny that the show’s pushing the envelope at all. In the laundry list of issues taken on in the first three episodes—”passionless sex, STIs, casual abortions, boring boyfriends, gay boyfriends, drugs, money woes, body image”—Swin conveniently overlooks what the show is doing that’s novel and exciting. Let’s break it down:

The sex? Plenty of ink has already been spilled over the show’s explicit and often painfully awkward sex. The aggressively un-glamorous hook-ups in Girls are far more realistic than anything else on television. And such a frank and funny portrayal of young sexuality—at least when it’s through women’s eyes—is noteworthy enough to warrant props, as well as plenty of hand-wringing articles about the state of sexual politics these days.

Body image? Much has been made of series creator Lena Dunham’s willingness to put her average-weight body on display. As Emily Nussbaum wrote in her rave review in New York, it shouldn’t be revolutionary to see Dunham’s belly rolls, but “in a culture soaked in Photoshop and Botox,” it certainly is. (See a certain MoJo review that praises “the hot one” for further evidence that Dunham’s deliberate self-exposure is brave.)

The “casual” abortion? With this story line, sprung in just the second episode, the show breaks a cardinal rule of Hollywood: That abortion can rarely even be mentioned, let alone treated as anything less than the most difficult decision of a woman’s life. In reporting to her semi-boyfriend that she’s accompanying her friend to her abortion appointment, Dunham’s character Hannah says, “What was she going to do? Have a baby and take it to her babysitting job? That’s not realistic.” It’s a line that seems custom designed to elicit cheers from the feminist critics who groaned though Juno, rolled their eyes at the linguistic cowardice of Knocked Up, and hoped that the abortions recently portrayed on Friday Night Lights and Grey’s Anatomy might mark the dawn of a bold and honest new era.

STIs? In the next episode, Hannah finds out she has HPV—a move that Alyssa Rosenberg hailed as the “the single bravest plot development of the lady comedy boom.” (If you doubt that, recall that author Ayelet Waldman’s real-life confession that she had the virus prompted an explosion of scolding last year.)

Friends. This doesn’t make Swin’s list, but the relationships between the four BFFs are clearly what the show’s all about. Rebecca Traister explains in a great piece at Salon, “Part of the point of ‘Girls’ is that the sex, and the guys with whom the sex happens, are not the point.” Indeed, the easy intimacy of these friends is easily the most true-to-life aspect of the show.

Sure, if you ignore all that groundbreaking storytelling, Girls may seem like a “stock narrative.” After all, sex comedies and coming-of-age stories, like American Reunion, are regular fare—it’s just that they’re rarely told from a female perspective. Which is, of course, partly why the show’s been hyped so heavily among progressive young women hungry to see their realities portrayed on screen. (While some dudes might need the Apatow seal of approval to get interested in a female-driven comedy, we do not.) It’s tempting to hope for the show to truly be, in the words of Salon critic Willa Paskin, FUBU: “for us by us.” As Nona Willis Aronowitz writes at GOOD, when “there are so few shows starring complicated, authentic young female characters,” Girls ends up bearing the heavy burden of representing all of us.

Of course, there’s no way that one show can fulfill all girls’ desires for self-representation—and Girls certainly doesn’t. The show embodies a very specific type of 20-something women—over-educated, affluent, struggling in the big city with the comfortable support of a parental safety net. As Swin rightfully notes, its characters are classic victims of First World Problems. And it remains to be seen if Girls will be relatable beyond the specific milieu of, in Dunham’s words, “the rarefied white hipster thing.” Making all four main characters white was a glaring mistake—especially since adding a little diversity to the crew in a place like NYC would not have sacrificed any verisimilitude.

While the racial politics are disappointing (at least in the first three episodes), the show deals with class privilege more deftly. The clueless entitlement of the characters on Girls could be off-putting if it wasn’t so clear that the show itself is far more self-aware than they are. When Hannah casually hopes she has HIV so she has a real problem to worry about instead of the small indignities of her parents cutting her off and her sorta-boyfriend not texting her back, the gynecologist speaks what the audience is feeling: “That is an incredibly silly thing to say.” It’s a delicate balance: Treating the trials and tribulations of ambitious young women who’ve been taught they can do anything compassionately but not too seriously. But the show strikes it well. In a thoughtful piece on the class dynamics in the show, Irin Carmon writes, “Even as [Dunham] takes her characters—and her peers’—pain seriously, she’s affectionately skewering them for our benefit, partly because she knows they’ll come out of it mostly fine.”

Which is why it’s strange that Swin found Hannah’s character so unsympathic. Her only crime seems to be being “an aspiring essayist who’s barely written anything, a college graduate who hasn’t accomplished anything, and an English major who hasn’t earned anything.” In short, being a 24-year-old woman, one who has the audacity to believe the first four chapters of her memoir are brilliant and the next five will be good, too—once she, you know, actually lives the rest of her life.

It’s the stuff of a classic coming-of-age narrative, no different than many others that have explored “the post-college era of confused self-creation.” Except it’s about girls. I’m not saying that’s why Swin hated it, but it’s definitely why I loved it.