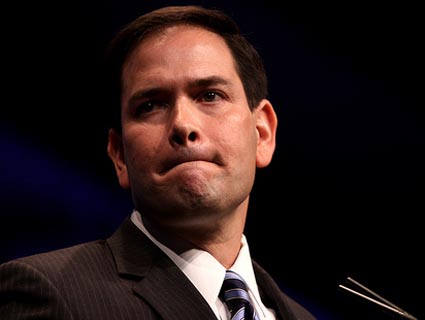 Sen. Marco Rubio (R-Fla.) has been trying to create some political space for GOP presidential candidate Mitt Romney, who has embraced a draconian “attrition through enforcement” approach to immigration, to move to the center on the issue. The Washington Post reports that Rubio’s alternative to the DREAM Act, which would provide legal status without citizenship to some undocumented immigrants brought to the US as minors, is getting a look from immigration reform activists:

In recent days, Rubio has quietly reached out to a number of immigrant advocates who are usually White House allies but have grown frustrated with some of the president’s policies. Some of the activists say they are open to Rubio’s effort — even though it would stop short of a provision in the Democratic-backed Dream Act to create a path to citizenship — because it would at least provide some relief to people at risk of being deported.

Rubio’s plan is getting attention from activists in part because they’re in dire straits—legalization without citizenship is better than getting deported to a strange country you’ve never really lived in because your of something your parents did. The temptation to embrace Rubio’s proposal must be pretty strong, particularly for those activists who have family and friends who would be eligible for legal status under the proposal.

The Post piece, however, is shorn of the relevant historical context of the DREAM Act. Although many media outlets have referred to Rubio’s proposal as “Republican DREAM Act,” the original DREAM Act was the Republican DREAM Act. It was first introduced by Senator Orrin Hatch (R-Utah) in 2001, who later opposed President George W. Bush’s attempt at comprehensive immigration reform. The proposal quickly became a bipartisan one. Like the individual mandate in health care reform, the DREAM Act represented a narrower alternative to a more ambitious approach to a policy problem—one Republicans were willing to embrace as long as there didn’t seem to be any chance of it happening. Like the mandate, once Obama embraced the DREAM Act, it became the latest manifestation of the dark socialist menace threatening America.

The Rubio proposal hardly puts Obama in a “box,” as the Post suggests. All Obama has to do is endorse the Rubio option as a stopgap measure, say it’s the best that can be done for now, and tell Congress to get to work. At that point, the GOP will fling it into a black hole of obstruction, from which neither hope nor light can escape.