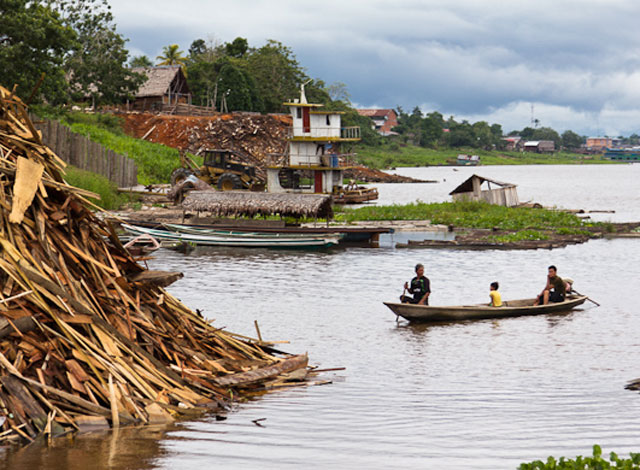 Sawmills line the banks of the river to receive raw lumber from the forest. Here it is processed to rough planks before conditioning and further export. Toby Smith/<a href="http://www.eia-global.org/" target="_blank">Environmental Investigation Agency</a>

Cedar and mahogany are woods known for their ability to class up a living room. Both woods are common in high-end furniture; cedar is often used in flooring, and mahogany makes for some fine moldings. But it doesn’t come cheap: The wood from one mahogany tree costs about $11,000 on the lumber market; a cedar tree runs about $9,000. The Peruvian Amazon is a major source of these woods for the American market, and a new report from the Environmental Investigation Agency found that between 2008 and 2010, 35 percent of inspected shipments from Peru contained wood from illegal logging operations; the researchers say that the overall figure (including non-inspected shipments) is estimated to be as high as 88 percent.

The report’s authors point out that because of lack of oversight, illegal logging is widespread in Peru—despite the fact that it received $150 million yearly in international support for its forest conservation programs. Although timber operations cash in on the dodgy practices, the overall effect is detrimental not only to the environment, but also to the economy and local people. Researchers in Loreto, where much of the activities take place, estimate that illegal logging losses (due to “tax evasion, non-payment of required fees, and devaluation of standing timber”) cost Peru $250 million annually, 1.5 times more than the country earns from all its timber exports combined. The humanitarian cost of logging is also considerable. Consider this moving testimony from one former logger:

Maria, a single mother nearing 50 years of age, had no job. thus, when a neighbor told her about temporary work available as a cook in a logging camp, she thought she had been presented with a good opportunity. The pay seemed good to her: 300 soles per month (approximately US $110), above the average pay for a cook in the city of Iquitos. She would have to leave her children and move to the camp, but it would only be for three months. Unfortunately, things did not turn out as planned. Six months later, she ended up fleeing.

In order to convince her to move to the jungle and leave her children, the habilitadores gave her 250 soles (approximately US $90) as an advance payment. She left Iquitos and traveled one day by river to join up with other people who knew how to get to the camp. From there, days to the middle of the jungle.

Getting there was not the most difficult part. Maria was the only woman in the camp and was surrounded by approximately 25 men, most of whom were between the ages of 20 and 30, and all of whom were strong enough to fell trees measuring more than one meter in diameter. Maria’s nightmare began when she realized that the men expected her to not only cook them breakfast, lunch, and dinner, but also provide them with sexual favors.

Maria remembers each night as being a nightmare. “I was there for six months. I barely slept from my fear, always worried that something was going to happen. when I knew they wanted to attack me, I couldn’t sleep. thinking they were coming, I would wake up. so that they would think I was awake, I would move, I would get up, I would light my lantern, that is the way I was there, I would sleep on my side. And suddenly it was time to wake up.”