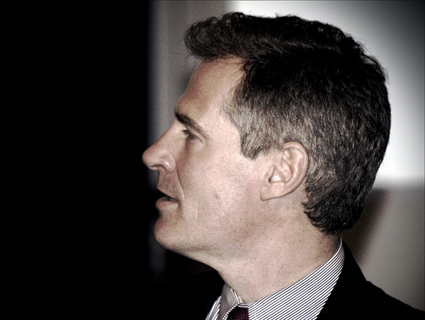 I wrote on Monday about GOP political guru Eric Fehrnstrom’s dilemma heading into the November election: How to convincingly shill for two candidates, Mitt Romney and Massachusetts Sen. Scott Brown, who hold sharply diverging views on the some of the biggests issues of the day. What will Fehrnstrom say when he’s inevitably asked to defend Romney’s fierce opposition to the Dodd–Frank Wall Street reform law—a law that Brown voted for (after watering it down) and is campaigning on already? Make one false step and you’re the star of someone’s $500,000 ad buy.

The flip side of that dilemma is that even if Fehrnstrom doesn’t end up disparaging one of his candidates’ positions, Democrats are perfectly content to lump Brown and Romney together as BFFs. Brown, locked in a dead-even re-election battle against Democrat Elizabeth Warren, got a lot of traction ahead of his 2010 special election by pushing back against Democrats’ attempts to tie him to George W. Bush and other Republicans. Relative to the rest of the party, he’s still quite popular in Massachusetts, in large part because voters see him as somewhat mavericky.

There’s some symmetry to the campaign, at least. For some time now, Warren has tethered her Senate campaign to the fortunes of President Barack Obama. Warren played a starring role in the president’s recent documentary-quality infomercial, and the Obama campaign recently sent out two minutes of deleted scenes from the film featuring…Warren, talking about the Consumer Financial Protection Bureau she conceived and helped design.