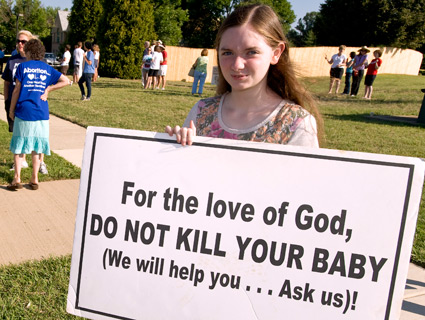 The NRLC endorsement came the same day that the Susan B. Anthony List, another anti-abortion rights organization, announced its “proud” support for Romney’s candidacy (after months of openly questioning his pro-life street cred).

When asked about Romney’s long record of inconsistency on abortion rights (read William Saletan’s exhaustive history on the former Massachusetts governor’s political calculations on the issue here), Tobias affirmed that the NRLC was absolutely convinced of Romney’s current convictions, adding that the pro-life movement is “filled with converts,” with Ronald Reagan as a shining example. Whatever distrust the NRLC may still harbor towards Romney stayed well-hidden as the panel played up the organization’s enthusiasm for his campaign and promised to devote the next seven months to “convincing” pro-life voters and grassroots activists that Romney has indeed changed his tune.

As with all endorsements and things political, timing is everything. On Wednesday, Rick Santorum dropped out of the race, all but ensuring that Romney snags the nomination. During the primary slog, the NRLC has been careful not to write off any viable conservative candidate; the group’s leaders admit that they learned their lesson after making the mistake of endorsing Fred Thompson for president in late 2007.

Essentially, anti-abortion activists’ endorsement of Romney is the political equivalent of how Richard Gere felt about the US Navy in An Officer and a Gentleman: they got nowhere else to go.