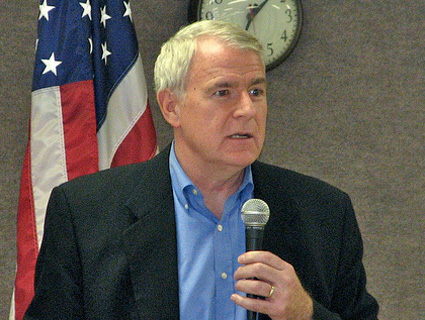 Tom Barrett wants a second shot at Scott Walker. The 58-year-old mayor of Milwaukee lost to Walker by nearly 125,000 votes in Wisconsin’s 2010 gubernatorial election, a bitterly fought race in a tea-party-fueled GOP landslide year. Now, 18 months later, Walker’s anti-union and staunchly conservative agenda has divided the state and created the momentum for a June 5 recall election. The populist outrage will favor the Democrats, and the polls show Barrett is best-positioned to oust Walker. But first he must win his own party’s nomination in the May 8 primary—and that’s no lock.

Barrett plans to spend the next month on what he calls the “political speed-dating” circuit, raising money and rallying support around the state, all while continuing to run Wisconsin’s largest city. Perhaps his biggest obstacle, though, is Wisconsin’s largest labor unions, which have wasted no time slinging mud at Barrett and pouring money and manpower into backing his main rival, former Dane County executive Kathleen Falk.

Barrett and Milwaukee’s unions weren’t always at loggerheads. In fact, when Barrett was considering a run for Milwaukee mayor after leaving Congress in 2002, he sought the advice of a man who’s now one of his most outspoken critics in the labor community: Rich Abelson, the longtime executive director of one of Milwaukee’s most influential unions, the American Federation of State, County, and Municipal Employees’ District Council 48.

The two men were “good friends” back then, Abelson recalls. When Barrett served in Congress, Abelson says, he agreed with Barrett’s decisions “99.9 percent” of the time. One afternoon, they met for lunch to discuss Barrett’s mayoral bid. “I don’t want to run for mayor if I’m going to alienate everyone,” Barrett said. “The fact of matter is,” Abelson replied, “the minute you sit down in the mayor’s chair, the percentage of time that we agree is going to drop to 75 percent. This is where the rubber meets the road. The decisions you make as mayor are going to be far more controversial.”

Indeed they were. Today, Abelson describes his relationship with the mayor over the past nine years as “up and down” and “disappointing.” His grousing mostly stems from two particular incidents, both in the winter of 2011. In one episode Abelson claims Barrett failed to negotiate in good faith with AFSCME Council 48 and the AFL-CIO over a new contract for the city’s public employees, at one point proposing to limit employees’ bargaining rights. (Barrett says the city’s proposal was part of the collective bargaining process. He also stresses that budget cuts pinching Milwaukee forced him into tough decisions about whether to make public workers pay more for benefits as a way to avoid layoffs.)

Abelson also says Barrett waited too long to condemn Act 10, the bill unveiled by Walker in February 2011 that cut bargaining rights for many public employees and made it harder for unions to recertify and collect member dues. That hesitance still stings Abelson. “I think it’s an issue for him in this election.”

Labor has certainly made it one. Days after Barrett declared his candidacy, AFSCME’s Wisconsin chapter sent an email blast to its members that included a deceptively edited video suggesting that Barrett once supported Act 10. AFSCME later admitted the video was “over the top” but held firm in its criticism. “While we used poor judgment in directing our members’ attention to an Internet video that went over the top to make its point, we believe it is essential to bring attention to Barrett’s record on collective bargaining,” the union said in a statement. “Unfortunately, it is not a good record.”

Recently retired congressman Dave Obey, who endorsed Barrett and is campaigning on his behalf, ripped the video as “misdirected and unfair.” A longtime ally of organized labor, Obey hails Barrett’s record on labor issues. “For 42 years in the Congress and 6 years in the state Legislature, my opponents knew I was in the corner of labor, and still am,” he says. “It’s safe to say that Tom Barrett’s record on labor issues is every bit as good as mine.”

For his part, Barrett says labor’s attacks are false and, moreover, damaging to Democrats’ overarching goal of defeating Scott Walker. “For any of us to spend one second attacking the other, it’s bad policy, it’s wrong, and shame on us,” he says. “We can’t run this far in the marathon only to have someone trip someone up in the final two yards.”

What he lacks in big-name union endorsements Barrett makes up for with the support of popular Wisconsin Democrats. Obey, Sen. Herb Kohl, Rep. Ron Kind, and former Rep. Steve Kagen have all endorsed him, saying he’s the best candidate to beat Walker. If elected governor, Barrett says he’ll call a special session to restore the bargaining rights stripped away by Walker and Republican members of Wisconsin’s Legislature. And if that doesn’t work, he’ll push for new legislation with the same intent.

What Wisconsin needs even more, Barrett insists, is a governor who won’t further divide Wisconsin (if that’s possible), someone who can rebuild the relationships between Democrats and Republicans, liberals and conservatives. “In February 2011 [Walker] dropped the bomb on this state, and Wisconsin has been in a state of political civil war ever since,” he says. “I’m the guy who can stop the civil war.”

Barrett does have a feistier side, which came out as he discussed Scott Walker’s jobs record in a recent interview. Walker is failing Wisconsin’s economy, he says, and won’t get close to meeting his pledge to create 250,000 jobs in his first four years in office. In 2011, Wisconsin lost 21,000 public- and private-sector jobs. “By starting an ideological war, he took his eye off the very thing he promised,” Barrett says.

There is more than just the big unions working against Barrett. Barrett was the last of four Democrats to enter the field to run against Walker. And he is not a favorite of the activists and organizers who ignited the 2011 protests over Walker’s anti-union Act 10 bill, the die-hards who marched on the state capital building and occupied the rotunda for two weeks. In an op-ed, Alex Hanna and Mike Amato, top officials with the Teacher Assistants Association, the union that spearheaded the 2011 occupation, rapped Barrett for not doing enough about unemployment and economic growth in Milwaukee. They endorsed Falk. (TAA as a whole has not endorsed anyone.)

Yet Barrett remains a popular figure across Wisconsin. A recent recall poll, released by the Marquette University Law School on March 27, shows Barrett leading Falk 36 to 29 in a Democratic primary match-up. (Barrett had not yet announced his candidacy at the time of the poll.) Although his recall campaign may have gotten a late start, allies and critics say Barrett benefits from having more name recognition and popularity than Falk. “I have been in over 20 counties around the state in the past six or seven months, and I have yet to find more than literally a handful of people who don’t think Tom Barrett is the strongest candidate,” Obey says.

That popularity, Obey continues, is crucial now that Walker and his supporters have begun attacking Democrats. “The fact is, I think Tom is better positioned to withstand the attacks that will be made on him than [Falk] is.”

A few unions have officially endorsed Barrett, including the Amalgamated Transit Union, Operating Engineers Local 317, and Iron Workers District Council of North Central States. In the Public Policy Polling’s February survey and Marquette’s March poll, Barrett wins more support among union members and union households than Falk does. Which is to say, Falk may have won the most union-wide endorsements, but rank-and-file members are far from unanimous in their support of her. (Scot Ross, a spokesman for Falk, questions PPP’s and Marquette’s findings and says the campaign’s internal polling shows Falk leading Barrett in union support.)

The polls are less kind to Barrett in a hypothetical rematch with Walker. Marquette’s March poll puts Walker ahead by two percentage points, 47 to 45, though that’s within the four-point margin of error. But with the GOP super-PACs, Americans for Prosperity, and wealthy conservative donors pledging their support to Walker, Barrett knows that whomever faces Walker is in for a bloody, bruising fight. Yet he’s still eager to face off with Walker once again. “Any of you seen that movie Groundhog Day?” he joked on Wednesday at a backyard fundraiser in Madison. He waited a beat, then added: “But remember, that movie had a happy ending.”