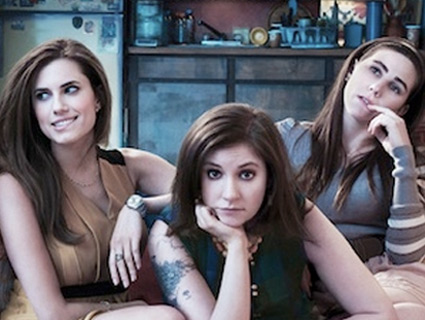 When watching HBO’s new, hotly hyped Girls, one thing is clear from the get-go: Hipsters are really going to like this show. Which is to say that it is as profoundly bland as it is unstoppably irritating.

The central character is an unsympathetic victim of First World Problems who mumbles her way through a Brooklynite’s perdition of unpaid internships and missed orgasms. In its first three episodes, the comedy series establishes a new low for the premium cable network, even surpassing John From Cincinnati in its level of sheer unwatchability.

(Not everybody at Mother Jones thinks Girls is terrible. In fact, some of Swin’s colleagues loved it. Read the counterpoint review here.)

Girls, which premieres Sunday, April 15 at 10:30 p.m. EST, focuses on the twentysomething Hannah (played by series creator Lena Dunham): an aspiring essayist who’s barely written anything, a college graduate who hasn’t accomplished anything, and an English major who hasn’t earned anything. Accompanying her on her road-to-nowhere is Marnie (Allison Williams), the classically beautiful roommate who somehow has nothing but patience for Hannah. Rounding out the cast of poorly dressed stereotypes are Jessa (Jemima Kirke), a promiscuous, free-spirited Brit who thinks conventional dating is “for lesbians,” and Shoshanna (Zosia Mamet), a Sex and the City-worshipping virgin.

And with this, the creative team behind Girls throws everything at the wall (passionless sex, STIs, casual abortions, boring boyfriends, gay boyfriends, drugs, money woes, body image), in an effort to see what sticks. But due to tired tropes and failed attempts at dry humor, nothing does.

This approach to examining the 21st century young woman certainly wasn’t destined to flop. Comedies based on exploiting stereotypes are often extremely funny—or at least diverting enough—and allot ample room for delicious subversion. The fatal flaw in Girls is that it can’t seem to settle on how best to augment its material’s deafening familiarity. The series’ mumblecore-hued comedy goes for both the awkward exchanges and lewdness, but without the commitment or vigor required to make the viewer’s cringes ultimately rewarding. Its recycled pathos isn’t likely to move viewers who don’t blame all personal shortcomings on the Great Recession. And watching a clique of Millennials simply being dissatisfied with reality doesn’t itself make for tolerable viewing, thus nixing any and all potential for hate-watching.

Every time Hannah’s subplots reemerge as the focus, things take a turn for the bleakest. “I could be a drug addict! Do you realize how lucky you are?” Hannah yells to her justifiably disappointed parents, in one of many lines of dialogue that sound like they were copied from the rough draft of a bad David Gordon Green movie. A scene in which she ambushes her parents in their hotel room, pleading with them to keep bankrolling her bum life as she trips balls on opium, is bitingly funny…on paper. In its limp execution, the moment is yet another display of infuriatingly clumsy comic timing. Same goes for the numerous interactions Hannah has with her quasi-boyfriend Adam (the otherwise talented Adam Driver). “You’re a dirty little whore, and I’m gonna send you home to your parents covered in cum!” Adam grunts, in what must be the least amusing dirty talk ever.

Strip away the forced indie conventions and the pretense of big-city grit, and you’re left with a show that receives all the marketing benefits of flying under the coveted HBO banner, but one that has all the creative energy and maturity of Are You There, Chelsea?

There is, however, one bright spot in this colossal mess of a series: Allison Williams’ nimble and convincing performance as Marnie. (Yes, I fully understand the kind of guff I’m inviting by reserving praise exclusively for the hot one, but just try to hear me out.) As Hannah’s self-possessed BFF, Williams* navigates the character’s sexual and emotional frustrations with poise, understated playfulness, and a unique magnetism. She takes what would have otherwise been the latest incarnation of the uptight-sexpot archetype and delivers a disarming portrayal that almost redeems the general torpor of the show. Almost.

It’s easy to understand why expectations for Girls were set so high. Just consider the pedigree: Judd Apatow signed on as one of the executive producers, and he earnestly plugs the series at all possible venues. With Apatow’s habit for working on critically acclaimed cult TV series (The Larry Sanders Show, Freaks and Geeks, The Ben Stiller Show, Undeclared), it was only natural to anticipate something awesome. The writing of Lena Dunham—a relative newcomer who racked up major film-festival points with 2010’s Tiny Furniture—has been compared to the works of Larry David and John Cheever. (That’s right: John. Cheever.) Oh, and some gun-jumping critic at the New York Post crowned her our generation’s Woody Allen. And with Entourage and Sex and the City both thankfully put down, who wouldn’t want to see HBO purge itself of that kind of risk-free commercial thinking?

But for all the hopes and good press, the inaugural episodes of Girls amount to little more than inertia disguised as quirkiness, stock narrative masquerading as art, and peskiness paraded as high comedy.

* Brian Williams’ daughter, in case you were curious.