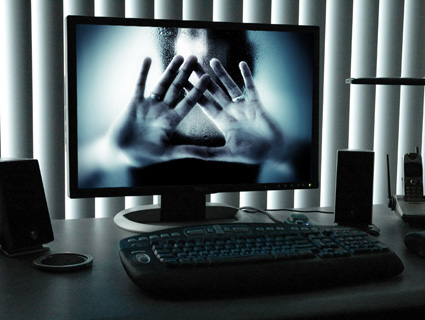 I was out of the country only nine days, hardly a blink in time, but time enough, as it happened, for another small, airless room to be added to the American national security labyrinth. On March 22nd, Attorney General Eric Holder and Director of National Intelligence James Clapper, Jr. signed off on new guidelines allowing the National Counterterrorism Center (NCTC), a post-9/11 creation, to hold on to information about Americans in no way known to be connected to terrorism—about you and me, that is—for up to five years. (Its previous outer limit was 180 days.) This, Clapper claimed, “will enable NCTC to accomplish its mission more practically and effectively.”

Joseph K., that icon of single-lettered anonymity from Franz Kafka’s novel The Trial, would undoubtedly have felt right at home in Clapper’s Washington. George Orwell would surely have had a few pungent words to say about those anodyne words “practically and effectively,” not to speak of “mission.”

For most Americans, though, it was just life as we’ve known it since September 11, 2001, since we scared ourselves to death and accepted that just about anything goes, as long as it supposedly involves protecting us from terrorists. Basic information or misinformation, possibly about you, is to be stored away for five years—or until some other attorney general and director of national intelligence think it’s even more practical and effective to keep you on file for 10 years, 20 years, or until death do us part—and it hardly made a ripple.

If Americans were to hoist a flag designed for this moment, it might read “Tread on Me” and use that classic illustration of the boa constrictor swallowing an elephant from Saint-Exupéry’s The Little Prince. That, at least, would catch something of the absurdity of what the National Security Complex has decided to swallow of our American world.

Oh, and in those nine days abroad, a new word surfaced on my horizon, one just eerie and ugly enough for our new reality: yottabyte. Thank National Security Agency (NSA) expert James Bamford for that. He wrote a piece for Wired magazine on a super-secret, $2 billion, one-million-square-foot data center the NSA is building in Bluffdale, Utah. Focused on data mining and code-breaking and five times the size of the US Capitol, it is expected to house information beyond compare, “including the complete contents of private emails, cell phone calls, and Google searches, as well as all sorts of personal data trails—parking receipts, travel itineraries, bookstore purchases, and other digital ‘pocket litter.'”

The NSA, adds Bamford, “has established listening posts throughout the nation to collect and sift through billions of email messages and phone calls, whether they originate within the country or overseas. It has created a supercomputer of almost unimaginable speed to look for patterns and unscramble codes. Finally, the agency has begun building a place to store all the trillions of words and thoughts and whispers captured in its electronic net.”

Which brings us to yottabyte—which is, Bamford assures us, equivalant to septillion bytes, a number “so large that no one has yet coined a term for the next higher magnitude.” The Utah center will be capable of storing a yottabyte or more of information (on your tax dollar).

Large as it is, that mega-project in Utah is just one of many sprouting like mushrooms in the sunless forest of the US intelligence world. In cost, for example, it barely tops the $1.7 billion headquarters complex in Virginia that the National Geospatial-Intelligence Agency, with an estimated annual black budget of at least $5 billion, built for its 16,000 employees. Opened in 2011, it’s the third-largest federal building in the Washington area. (And I’ll bet you didn’t even know that your tax dollars paid for such an agency, no less its gleaming new headquarters.) Or what about the 33 post-9/11 building complexes for top-secret intelligence work that were under construction or had already been built when Washington Post reporters Dana Priest and William Arkin wrote their “Top Secret America” series back in 2010?

In these last years, while so many Americans were foreclosed upon or had their homes go “underwater” and the construction industry went to hell, the intelligence housing bubble just continued to grow. And there’s no sign that any of this seems abidingly strange to most Americans.

A System That Creates Its Own Reality

To leave the country, of course, I had to briefly surrender my shoes, hat, belt, computer—you know the routine—and even then, stripped to the basics, I had to pass through a scanner of a sort that not so long ago caused protest and upset but now is evidently as American as apple pie. Then I spent those nine days touring some of Spain’s architectural wonders, including the Alhambra in Granada, the Mezquita or Great Mosque of Cordoba, and that city’s ancient synagogue (the only one to survive the expulsion of the Jews in 1492), as well as Antonio Gaudí’s Sagrada Família, his vast Barcelona basilica, without once—in a country with its own grim history of terror attacks—being wanded or patted down or questioned or even passing through a metal detector. Afterwards, I took a flight back to a country whose national security architecture had again expanded subtly in the name of “my” safety.

Now, I don’t want to overdo it. In truth, those new guidelines were no big deal. The information on—as far as anyone knows—innocent Americans that the NCTC wanted to keep for those extra 4 and a half years was already being held ad infinitum by one or another of our 17 major intelligence agencies and organizations. So the latest announcement seems to represent little more than bureaucratic housecleaning, just a bit of extra scaffolding added to the Great Mosque or basilica of the new American intelligence labyrinth. It certainly was nothing to write home about, no less trap a fictional character in.

Admittedly, since 9/11 the US Intelligence Community, as it likes to call itself, has expanded to staggering proportions. With those 17 outfits having a combined annual intelligence budget of more than $80 billion (a figure which doesn’t even include all intelligence expenditures), you could think of that community as having carried out a statistical coup d’état. In fact, at a moment when America’s enemies—a few thousand scattered jihadis, the odd minority insurgency, and a couple of rickety regional powers (Iran, North Korea, and perhaps Venezuela)—couldn’t be less imposing, its growth has been little short of an institutional miracle. By now, it has a momentum all its own. You might even say that it creates its own reality.

Of classic American checks and balances, we, the taxpayers, now write the checks and they, the officials of the National Security Complex, are free to be as unbalanced as they want in their actions. Whatever you do, though, don’t mistake Clapper, Holder, and similar figures for the Gaudís of the new intelligence world. Don’t think of them as the architects of the structure they are building. What they preside over is visibly a competitive bureaucratic mess of overlapping principalities whose “mission” might be summed up in one word: more.

In a sense—though they would undoubtedly never think of themselves this way—I suspect they are bureaucratic versions of Kafka’s Joseph K., trapped in a labyrinthine structure they are continually, blindly, adding to. And because their “mission” has no end point, their edifice has neither windows nor exits, and for all anyone knows is being erected on a foundation of quicksand.

Keep calling it “intelligence” if you want, but the monstrosity they are building is neither intelligent nor architecturally elegant. It is nonetheless a system elaborating itself with undeniable energy. Whatever the changing cast of characters, the structure only grows. It no longer seems to matter whether the figure who officially sits atop it is a former part-owner of a baseball team and former governor, a former constitutional law professor, or—looking to possible futures—a former corporate raider.

A Basilica of Chaos

Evidently, it’s our fate—increasing numbers of us anyway—to be transformed into intelligence data (just as we are being eternally transformed into commercial data), our identities sliced, diced, and passed around the labyrinth, our bytes stored up to be “mined” at their convenience.

You might wonder: What is this basilica of chaos that calls itself the US Intelligence Community? Bamford describes whistleblower William Binney, a former senior NSA crypto-mathematician “largely responsible for automating the agency’s worldwide eavesdropping network,” as holding “his thumb and forefinger close together” and saying, “We are that far from a turnkey totalitarian state.”

It’s an understandable description for someone who has emerged from the labyrinth, but I doubt it’s on target. Ours is unlikely to ever be a Soviet-style system, even if it exhibits a striking urge toward totality; towards, that is, engulfing everything, including every trace you’ve left anywhere in the world. It’s probably not a Soviet-style state in the making, even if traditional legal boundaries and prohibitions against spying upon and surveilling Americans are of remarkably little interest to it.

Its urge is to data mine and decode the planet in an eternal search for enemies who are imagined to lurk everywhere, ready to strike at any moment. Anyone might be a terrorist or, wittingly or not, in touch with one, even perfectly innocent-seeming Americans whose data must be held until the moment when the true pattern of eneminess comes into view and everything is revealed.

In the new world of the National Security Complex, no one can be trusted—except the officials working within it, who in their eternal bureaucratic vigilance clearly consider themselves above any law. The system that they are constructing (or that, perhaps, is constructing them) has no more to do with democracy or an American republic or the Constitution than it does with a Soviet-style state. Think of it as a phenomenon for which we have no name. Like the yottabyte, it’s something new under the sun, still awaiting its own strange and ugly moniker.

For now, it remains as anonymous as Joseph K. and so, conveniently enough, continues to expand right before our eyes, strangely unseen.

If you don’t believe me, leave the country for nine days and just see if, in that brief span of time, something else isn’t drawn within its orbit. After all, it’s inexorable, this rough beast slouching through Washington to be born.

Welcome, in the meantime, to our nameless new world. One thing is guaranteed: it has a byte.

Tom Engelhardt, co-founder of the American Empire Project and the author of The American Way of War: How Bush’s Wars Became Obama’s as well as The End of Victory Culture, runs the Nation Institute’s TomDispatch.com. His latest book, The United States of Fear (Haymarket Books), has just been published. To listen to Timothy MacBain’s latest Tomcast audio interview in which Engelhardt reflects on the unnatural growth of the US national security state, click here, or download it to your iPod here. Follow TomDispatch on Twitter @TomDispatch and join us on Facebook. To stay on top of important articles like these, sign up to receive the latest updates from TomDispatch.com here.