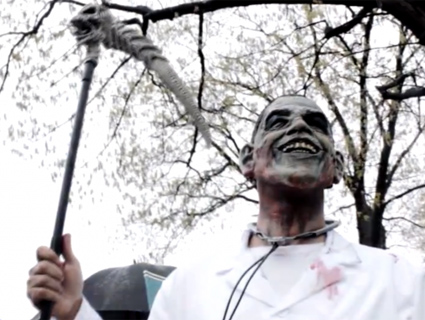 Dark money mastermind starts most generically named super-PAC ever: James Bopp, the brains behind the Citizens United case, has created a new super-PAC called the USA Super PAC. It’s not his first: Last May, he launched the Republican Super PAC, which hasn’t done much since, and he worked on the pro-Rick Santorum super-PAC Leaders for Families before throwing his support behind Mitt Romney.

C is for campaign commercial (and that’s good enough for me): On Thursday, the 9th US Circuit Court of Appeals voted 2 to 1 to strike down a ban on political advertisements on public TV and radio. The court ruled that the ban was too broad, violated free speech rights, and that its repeal wouldn’t pose a threat to educational programming. Does this mean attack ads during Downton Abbey?

What happens to Santorum’s super-PAC cash?: As the Center for Responsive Politics’ Viveca Novak puts it, super-PACs for washed up candidates “can do pretty much anything they want with the money. They can have a margarita party in the Bahamas.” It appears that the only limitation is that they don’t spend their leftover cash in coordination with a candidate’s campaign—although there’s little indication that anyone intends to enforce that rule.

Are your neighbors super-PAC donors? The campaign finance watchdog MapLight has broken down all of the super-PAC donor disclosures into this handy state-by-state influence visualization.