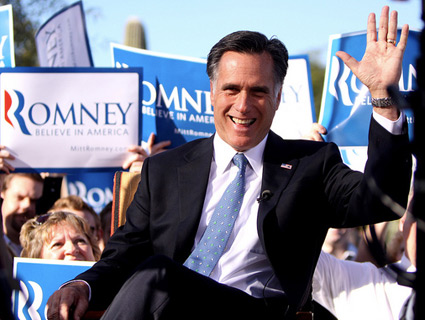 In the weeks leading up to Tuesday’s GOP primary in Wisconsin, Mitt Romney and Rick Santorum fell over themselves praising the most wanted man in the Badger State: Republican Gov. Scott Walker, who faces a recall election in June. Romney lauded Walker for taking on the “excesses that have permeated the public services union.” Santorum praised Walker for battling his state’s “union bullies,” adding, “Not only should he not be recalled, he should be reelected.” The Walker love was red meat thrown to Wisconsin’s GOP voters, the vast majority of whom back their embattled governor.

Both Santorum and Romney supported Walker, but in the end, it was Romney who won over Wisconsinites and clinched a decisive win. The major news networks called the primary for the former Massachusetts governor half an hour after polls closed at 9 p.m. Eastern. “We have won a great victory tonight in our campaign to restore the promise of America,” Romney said in Wisconsin on Tuesday night. “You won’t find Americans with bigger hearts than those here in our heartland.”

Romney’s Wisconsin win capped a three-primary sweep, as he also triumphed in the Maryland and District of Columbia. The wins widen Romney’s lead over Santorum in the delegate count to 384, according to CBS News. And although Santorum has insisted that his home state of Pennsylvania is his “firewall,” his last chance to steal the momentum in the nomination fight, Romney’s Tuesday trifecta all but cements his place as the Republican presidential nominee.

In Wisconsin, Romney won over voters beyond his usual core of supporters. He won among tea party supporters, hard-line conservatives, and blue-collar voters, exit polls showed. He also showed well among evangelicals, a bastion of Santorum support, with 38 percent backing Romney compared to 41 percent for Santorum.

Those same exit polls also showed that 1 in 5 GOP voters said they disapproved of Walker—5 percent slightly disapproving and 16 strongly disapproving. That’s an uptick from last week’s NBC/Marist poll, in which a staggering 91 percent of GOPers said they believed Walker was doing a good job as governor.

Romney’s appeal to such a broad swath of Wisconsinites was helped by key endorsements in the days before the primary. Both Rep. Paul Ryan and Sen. Ron Johnson stumped for and rallied around Romney as polls showed Santorum within striking distance. “We need to coalesce as conservatives around Mitt Romney,” Ryan said on Fox News last week. “The longer we drag it out, the harder it is to win in November.”