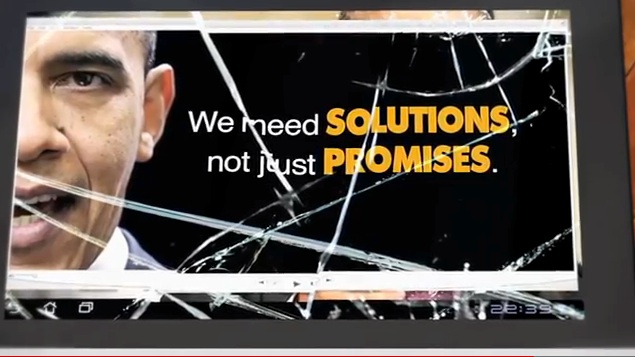 Crossroads GPS, the deep-pocketed nonprofit created by Karl Rove and Ed Gillespie, announced Wednesday that it plans to pump $25 million into a new ad campaign running in ten battleground states including Colorado, Florida, Virginia, and Pennsylvania. The group’s announcement is a direct response to the Obama campaign’s pledge earlier this month to spend $25 million on ads this month.

The first phase of Crossroads’ blitz will be a two-week run of the ad “Obama’s Promise,” which slams the president for supposedly failing to fulfill promises to help struggling homeowners, cut the deficit, and not raise taxes on working and middle class families. Crossroads says it will spend an initial $8 million on this push.

To the average viewer, this spot resembles an open attack on President Obama. No one watching it would consider it anything but a call to vote for Obama’s opponent. But there’s a catch. Because the ad doesn’t tell viewers to “vote for Mitt Romney” or oppose Obama in the November election, it is not considered an overtly political ad. It is instead known as “issue advocacy.”

Here’s why that distinction matters. As a 501(c)(4) nonprofit, Crossroads GPS can engage in politicking, but that can’t be the majority of what it does. Its focus, the law says, must be on promoting “social welfare” by discussing issues like debt, taxes, military spending, etc. And so when Crossroads runs so-called “issue” ads like “Obama’s Promise,” it allows them to bash Obama while staying on the right side of the law. Crossroads’ tax status also allows the group to keep secret its donors.

Make no mistake: this sort of dark money double-whammy is something you’ll see much, much more of between now and November.