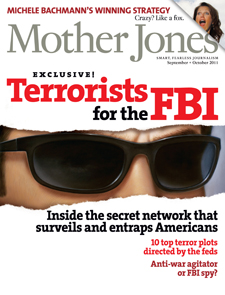 That clinking sound you hear is the toasting at MoJo‘s offices at the news that our “Terrorists for the FBI” project has won the international Data Journalism Award in the investigative category. (Read it here.) “This story is, by far, the best investigative piece” among the finalists, the jury said. “It shows the significant effort required to gather large amounts of data, analyze it, and deeply investigate the individual cases. The analysis discovered a clear pattern on how the FBI generated terrorist plots from sting operations. The investigation proves that conclusion, not only with numbers, but also with in depth analysis and reporting in the field.”

The result of an 18-month investigation by reporter Trevor Aaronson in collaboration with the Investigative Reporting Program at the University of California-Berkeley, the story started from the observation that in many of the high-profile terror prosecutions—the Portland Christmas tree bomber, say, or the Bronx synagogue bomber—it was actually a government informant who provided the jihadist rhetoric, the plot, the money, and even the explosives or weapons. Curious about this pattern, Aaronson reviewed every terror prosecution since 9/11—cases involving 508 defendants in all—and scoured thousands of pages of court documents. Aaronson’s data were refined, expanded, and comprehensively fact-checked by a team of reporters and editors, then turned into an online database and compelling visualizations by MoJo‘s developers and designers.

Among the investigation’s findings:

You can analyze the data yourself (parsing them by, say, state or alleged terrorist group affiliation), view fact sheets on individual defendants, and peruse our interactive charts. And, of course, you can read the other stories in our “Terrorists for the FBI” package, including a profile of radical-turned-informant Brandon Darby, and an investigation of the FBI’s “proxy detention” program under which Americans are interrogated, and allegedly tortured, by overseas security forces.

This was a major endeavor for Mother Jones—unlike some of our larger peers, we don’t have a roomful of computer-assisted-reporting specialists. Instead, we relied on equal parts shoe-leather and innovation; to be honored for it by our global peers is a dream come true. Follow us at @MonikaBauerlein and @ClaraJeffery as we tweet the World News Summit from Paris, drunk with excitement (and, um, surely nothing else).