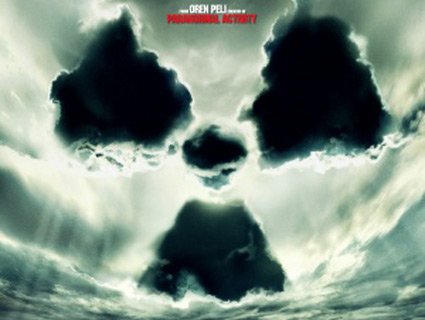 It sometimes seems as though people who make zombie movies (and zombie-ish movies) are trying to create a monopoly over minimizing tragedy.

This trend continues with Chernobyl Diaries, the new zombie(-ish) horror flick conceived and produced by Oren Peli (the Israeli-American director and ex-video game programmer who brought you the Paranormal Activity series and ABC’s The River). A group of upper-middle class white kids from America sojourn to Eastern Europe. They decide to dabble in “extreme tourism” and jump in a van headed to Prypiat, a long-abandoned Ukrainian city bordering the site of the 1986 Chernobyl nuclear catastrophe. It’s worth mentioning that these kids have big dreams. One of them is about to propose to his intelligent/hot/super-loyal girlfriend. Another is mulling over plans to relocate to Prague. Another wants to make a name for herself as an artist and photographer.

Well, none of those nice things are ever going to happen because, as previously mentioned, these people made a conscious decision to hike through a radiation-drenched, eerie-ass ghost town—a deserted city where (you guessed it) they are not alone.

By “not alone,” I mean to say that there’s a large gaggle of flesh-chomping freaks waddling all about the joint. The deranged gaggle of nuclear-undead chase after them in the dark of night. Needless to point out, the young tourists are: [censored].

Chernobyl Diaries does indeed have some chilling atmospherics—for that you may thank first-time feature director and visual-effects ace Bradley Parker. But the movie ultimately falls flat due to its lagging energy and a disappointing, thrill-free final act.

I’d now like to address the minor-to-moderate controversy surrounding the film: A number of advocacy groups and concerned citizens have been pushing for a boycott of the film, arguing that it exploits the hundreds of thousands of victims. (Parker claims he’s also received a gush of “kudos” from Chabad’s Children of Chernobyl, so I think it’s fair to say that he considers it a wash.)

“Anyone visiting Chernobyl should have the same respect as if they were visiting Auschwitz or the Khmer Rouge Museum in Cambodia,” Yago Alayza, a Florida-based activist who started a boycott petition on Change.org, said in interview with Reuters earlier this month.

It’s hard not to at least somewhat sympathize with this argument. The tragedy of Chernobyl is no less real than any other tragedy in human history. And if a movie popped up titled Holocaust Zombies (not to be confused with Zombie Holocaust), in which victims of the Third Reich emerged from a deep slumber to begin feasting on unsuspecting tourists, you can safely bet that people would be raising quite the justified fuss.

But in all fairness, if you’re looking for political correctness or sensitivity, you’ll have about as much luck with the zombie and horror genres as you would with the internet. Let’s flip through a few examples:

By this standard, one could accuse Hot Tub Time Machine of spitting in the faces of Chernobyl victims, since it prominently features an energy drink called “Chernobyl.” The point is that almost everything in life is offensive. But if you want to organize a boycott of Chernobyl Diaries, I would argue that it isn’t even worth your time boycotting. Besides, the quality of the movie will probably keep viewers from flocking to it all the same.

Chernobyl Diaries gets a wide release on Friday, May 25. The film is rated R for violence, some bloody images and pervasive language. Click here to get local showtimes and tickets.