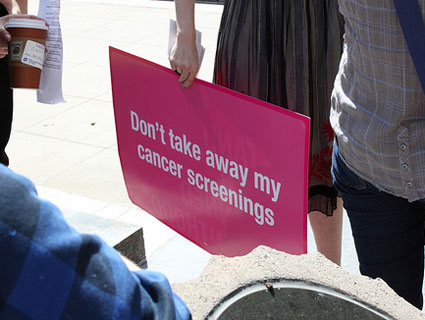 Going against the broader trend among House Republicans, Rep. Robert Dold (R-Ill.) rolled out a bill on Wednesday that would protect women’s access to abortion. The freshman lawmaker introduced the “Protecting Women’s Access to Health Care Act,” which would strengthen laws prohibiting discrimination against health care providers that provide abortions. The bill is meant to counter Dold’s GOP colleagues’ efforts to defund Planned Parenthood.

GQ‘s Marin Cogan reported from Dold’s tiny press conference to unveil the bill, noting that the Republican congressman didn’t have any cosponsors with him—instead, supporters from Planned Parenthood and Republican Majority for Choice were at his side. “This is an opportunity that we’ve got to do the right thing,” Dold told Cogan.

It’s already illegal to discriminate against healthcare providers for also offering abortions. So when states pass laws barring federal family planning money—called Title X funds—from going to groups that also provide abortions, the federal government cuts off those states’ access to all federal family planning money. So far, that hasn’t stopped a number of states, including Indiana, Texas, and Kansas, from passing laws that discriminate against abortion providers anyway. Dold may be hoping that by strengthening the legal prohibition against such discrimination, he can tempt some states to reconsider—and, perhaps, that he will get some media attention to remind voters in his new, much more Democratic district that he identifies as pro-choice.