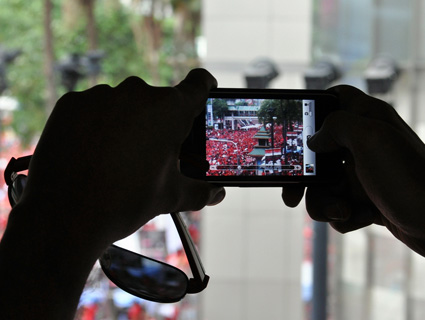 In June 2010, half a dozen rich donors came to Drew Ryun, a former Republican National Committee staffer, with the kind of question a dyed-in-the-wool operative like himself could only dream about. “If you had X number of dollars,” he recalls the donors saying, “what would you do that the conservative movement does not have?”

Conservatives have their think tanks, dozens of them at the state and national level. They also have a corporate-funded legislation mill in the American Legislative Exchange Council. What conservatives lacked, Ryun told the donors, were nimble attack blogs that could quickly capitalize on the latest missteps by big-government politicians or the “liberal” media—essentially hard-hitting, opposition-research-style shops that prize scoops, speed, and scandal over policy briefs and press conferences. His pitch: Create a network of one- and two-man digital media outlets with low overhead, rapid response, and a nose for controversy.

The donors loved it. They ponied up seed money in the low six figures, and Ryun’s conservative attack machine, Media Trackers, was born. Bonus: As a nonprofit, Media Trackers can keep the identities of those donors secret.

Oppo research and partisan muckraking are nothing new, of course. For decades, so-called trackers working for campaigns or political parties have used voice recorders and video cameras to exploit their opponent’s every gaffe, misstep, or controversy. It was a Virginia Democratic Party tracker that Republican George Allen infamously called “macaca” during his 2006 Senate bid—the racial slur went viral and helped sink Allen’s campaign.

Ryun, however, claims he wants nothing to do with the parties. “I’m talking about creating long-lasting impact for the conservative movement,” he says.

The first Media Trackers outlet launched in Wisconsin in January 2011. The timing was perfect, as the state was primed to explode in protest over Gov. Scott Walker’s anti-union “budget repair” bill. Media Trackers wasted no time in urging conservatives to “stand united” in support of Ryan. The Wisconsin bloggers’ biggest splash arguably came that August. A Media Trackers story with a headline screaming “EXCLUSIVE” promised a juicy scoop: that a labor-backed progressive group had violated Wisconsin state law by handing out free BBQ to Milwaukee residents in exchange for pledges to vote early in a closely fought state Senate recall election.

Media Trackers calls itself a “non-partisan investigative watchdog.”  Democrats and unions dismiss it as a group of partisan hacks.

The story, sourced to a single anonymous witness, sparked an investigation by a Milwaukee district attorney and a flurry of follow-up coverage in the local media. Conservative blogs flew into a frenzy over the scandalous activities unearthed by Media Trackers. Trouble is, the accusation turned out to be dead wrong; the DA found no evidence of wrongdoing.

After seeing Media Trackers in action, its anonymous donors shelled out enough fresh cash for Ryun to expand into Colorado, Florida, Montana, and Ohio. His 12 staffers (plus some interns and freelancers) now churn out dozens of daily posts and stories promoting a free-market agenda and hammering progressive rivals, the Occupy movement, unions, regulations, and government spending.

Media Trackers bills itself a “conservative non-profit, non-partisan investigative watchdog.” But Democrats and labor unions dismiss it as a bunch of partisan hacks bent on kneecapping labor and privatizing government services. Ryun makes no bones about his outfit’s ideology: “One thing we don’t hide is: ‘Yeah, we’re conservative—free-market, free-enterprise, full-spectrum conservative.'”

Although Ryun stresses the importance of fact-based research, the barbecue-for-votes nonscandal wasn’t the only time Media Trackers has mangled the truth. Last November, in another splashy post that was quickly amplified by the right-wing blogosphere, Media Trackers’ Wisconsin outlet claimed there were “no privacy protections” for people who signed a recall petition to recall Walker, leaving them open to harassment and abuse. PolitiFact rated the claim “Mostly False,” and noted that Media Trackers had given no evidence that harassment was taking place. And in March, soon after the Wisconsin Judicial Commission filed an ethics complaint against conservative state Supreme Court Justice David Prosser, Media Trackers published a story claiming four of the commission’s nine members had signed Walker recall petitions. In fact, none had.

Wisconsin Democrats and progressives who’ve dealt with Media Trackers say the organization peddles misleading stories while masquerading as a legitimate news operation. “It’s an outfit rotten to the core that would be laughable but for the fact that mainstream media fall for their tricks and amplify their acid lies,” says Graeme Zielinski, a spokesman for the state’s Democratic Party.

Ryun isn’t alone in trying to build a permanent attack operation. In 2010, David Brock, founder of the liberal watchdog group Media Matters for America, launched American Bridge 21st Century, an independent research shop that deploys trackers on the campaign trail and gathers damning research on GOP candidates. Bridge hopes to serve as a one-stop shop for all of Democrats’ oppo needs.

Bridge’s super-PAC arm has raised $5.8 million so far, according to ProPublica‘s “PAC Track,” with plans to raise as much as $20 million in the 2012 cycle. And that’s for the long haul. “We will be around cycle after cycle—donors like that,” a Bridge official told Mother Jones last year. “We’ll be a permanent piece of the campaign infrastructure.”

Drew Ryun says Media Trackers has been attracting new donors. (The Koch brothers and their affiliates, Ryun says, are not among those donors.) He plans to double the group’s footprint by year’s end while spinning it off from its current nonprofit sponsor, American Majority, a tea party training organization run by his twin brother, Ned. “To be able to pitch this to donors in the conservative movement as something we’ve never had is huge,” Ryun says. “With Media Trackers, I have a product I can’t help but sell.”