Update, Monday, November 19, 2012: Today, President Obama became the first sitting US president to visit Burma, where he met with President Thein Sein as well as Nobel laureate Daw Aung San Suu Kyi. Before the visit, President Thein Sein condemned recent violence against the Rohingya and pledged to consider extending new rights to the stateless minority. Human rights groups have criticized the President’s visit as premature, citing the regime’s remaining political prisoners as well as ongoing violence against ethnic minorities in the country.

Saiful Huq Omi, a photographer based in Dhaka, Bangladesh, first focused on Burma’s Rohingya refugees in 2009, when he began documenting their lives in Bangladesh, Malaysia, and the United Kingdom. The Rohingya—an ethnic, religious, and linguistic minority from Burma’s northern Rakhine State—have been persecuted for decades; nearly a million of them are estimated to reside in Burma, while another half million have sought refuge in Bangladesh. Smaller populations have fled to other countries.

The 1982 Citizenship Law of Burma stripped the Rohingya of their nationality, making them legally stateless. As Amal de Chickera, the head of the Statelessness and Nationality Projects for the Equal Rights Trust, explained in a recent conversation with Omi: “While many individual citizens of Burma experience human rights violations, the Rohingya are specifically targeted and face discrimination as a group. Outside of Burma most Rohingya are irregular migrants with no legal status. Because they are stateless they have to travel illegally, and are thus targeted and often become victims of arbitrary detention, deportation, extortion, trafficking, and smuggling.”

What Omi found especially striking from his encounters with the Rohingya was a pervasive and enduring sense of uncertainty among them about having no country to call home. How have these people coped with that agony for so many years?  “Other than the resettled community in Bradford, UK,” he says, “no one knew their future.”

These photographs were taken between 2009 and 2011. Beginning in late May, Omi will travel again to various Rohingya enclaves to continue the documentary project. 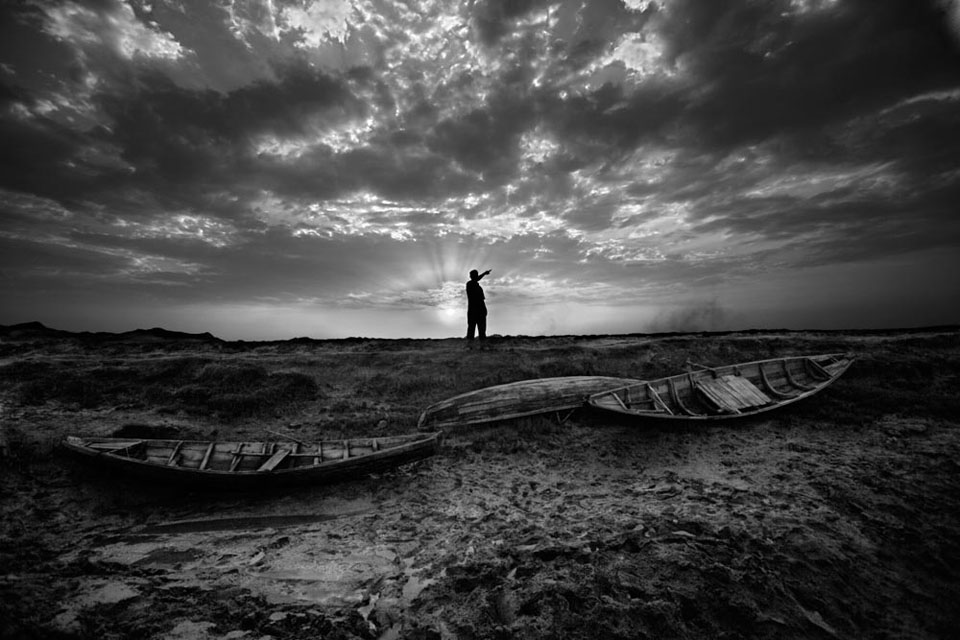 “My home is not far from here: You just cross the river Naaf, and there is my home by the riverside.” My guide, Abul Kalam pointed towards the other side of the river when we were coming back home after a long day of work. 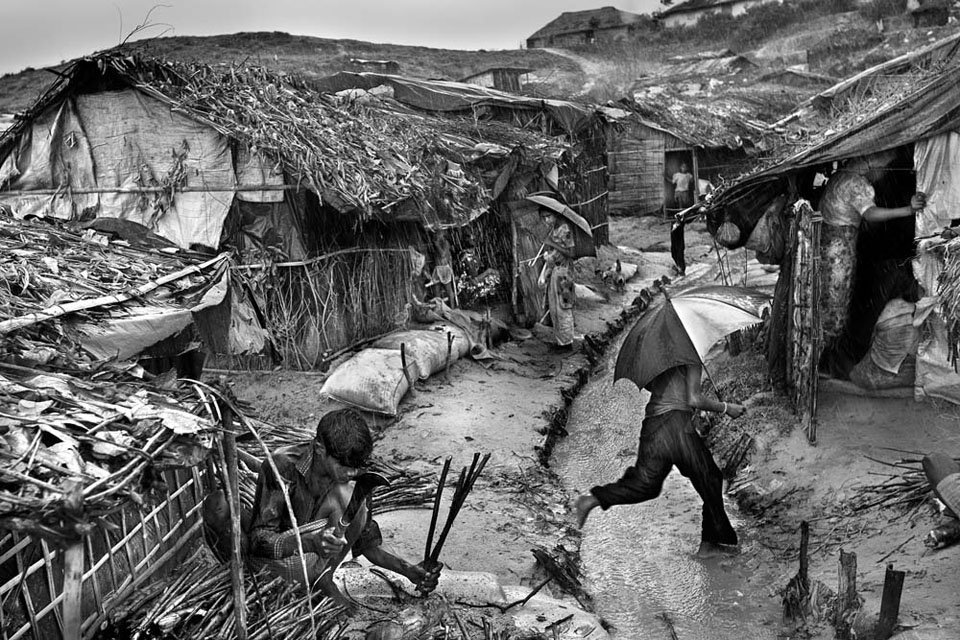 When it rains in the unregistered camps, the walkways become little rivers and there is a risk of landslide. But many Rohingyas feel they do not have any other place to go. They live a life of fear—of being mistreated by the local Bangladeshis, of starvation, of being forced to return to Burma, where they face oppression. 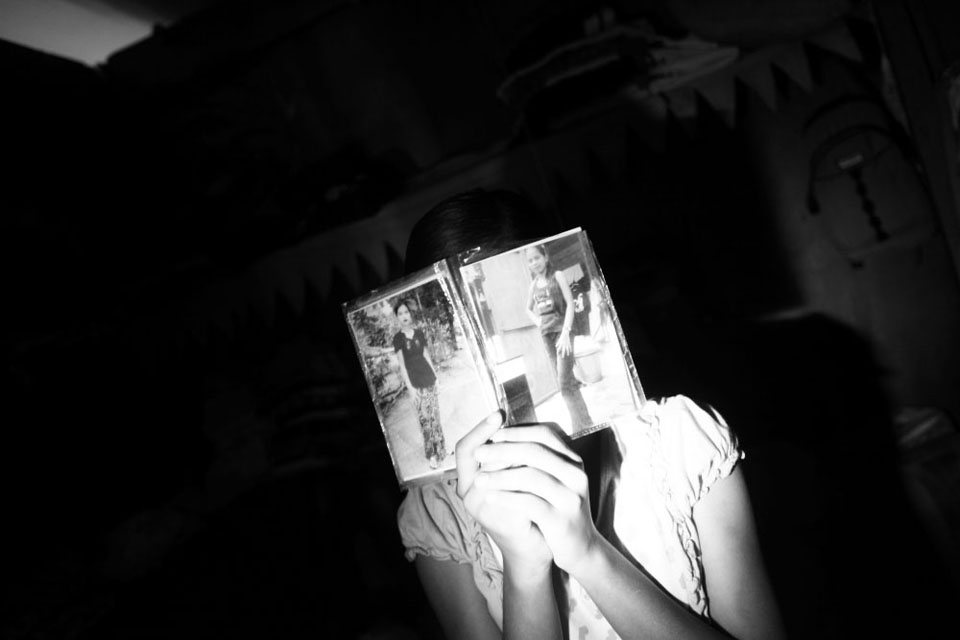 Rabeya’s mother, Dil Sufia, came to Malaysia 20 years ago from Burma. Dil Sufia couldn’t afford to bring her two daughters with her, and had to leave them with her sister. Rabeya, who was born in Malaysia, is 12 years old. She has never met her sisters, and only knows them from a few photographs. “I want my sisters back,” Rabeya said. 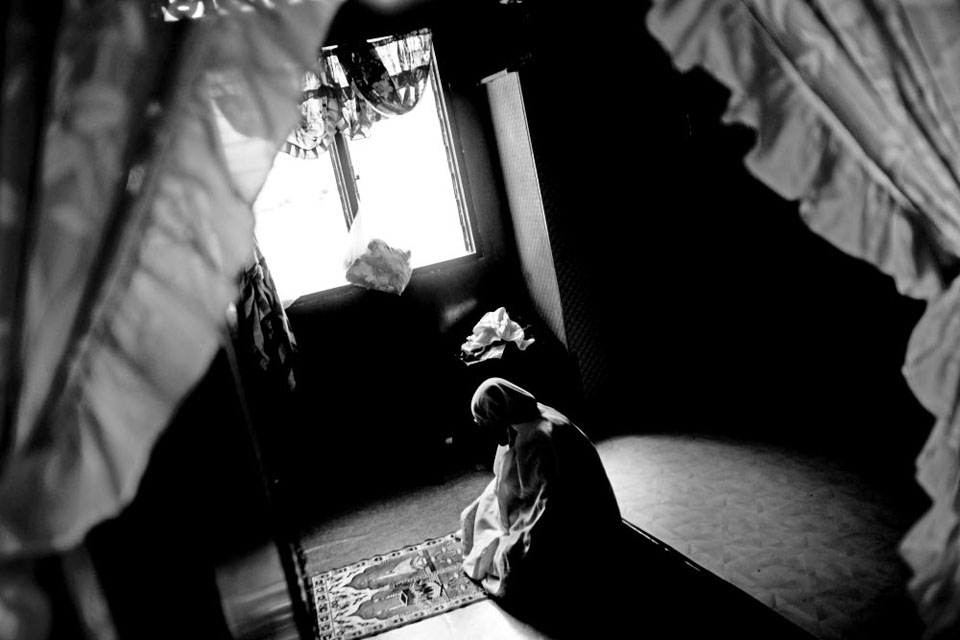 A Rohingya woman prays alone at home in Malaysia. 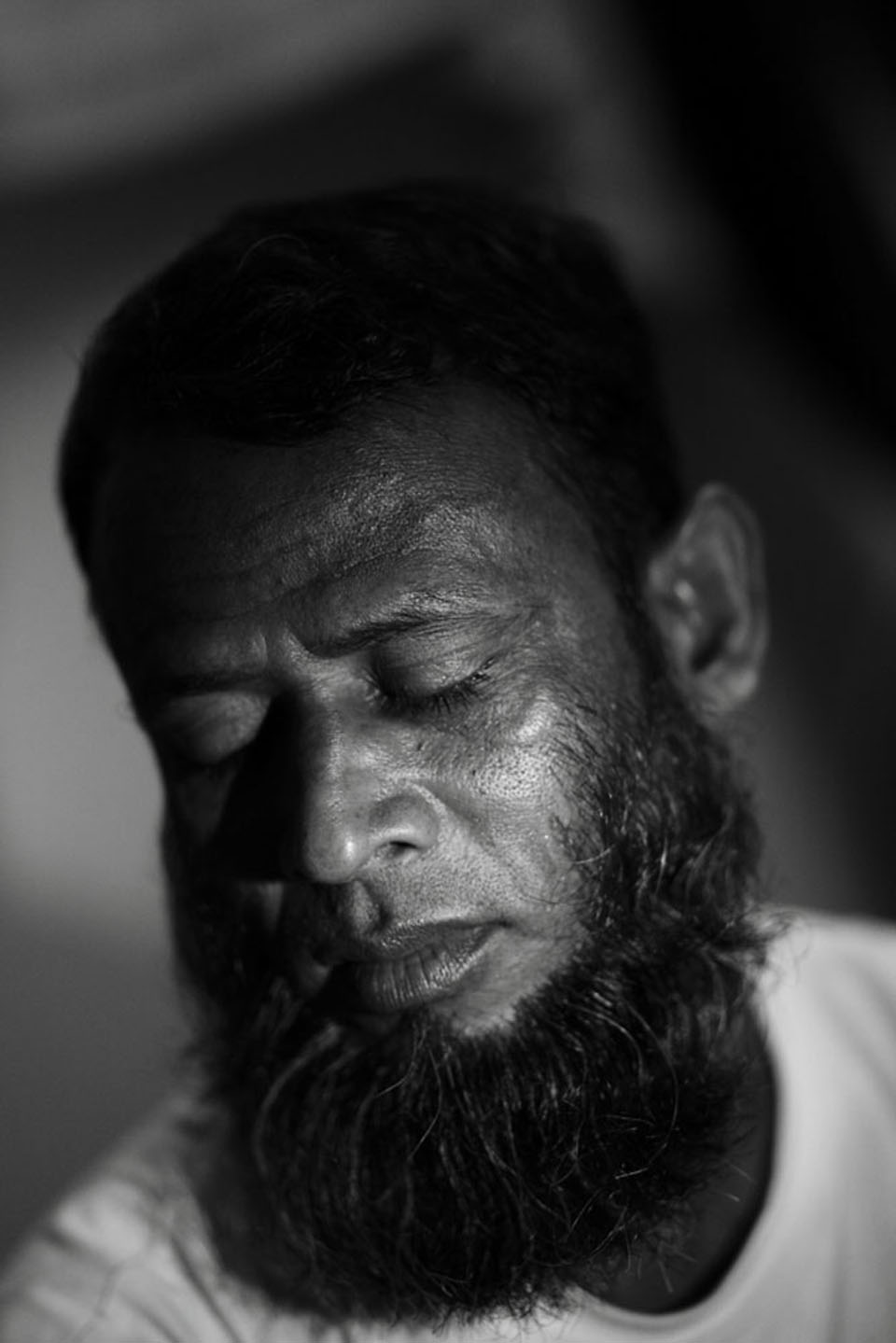 Abul Kalam came to Malaysia in 1992. It took him three months to reach Malaysia from Burma. He walked hundreds of miles, took boats, traveled in the dark, and crossed mountains and borders. Despite this strenuous journey, and leaving his wife and entire family behind, life did not improve much. He hopes to go back to Burma one day, he says. 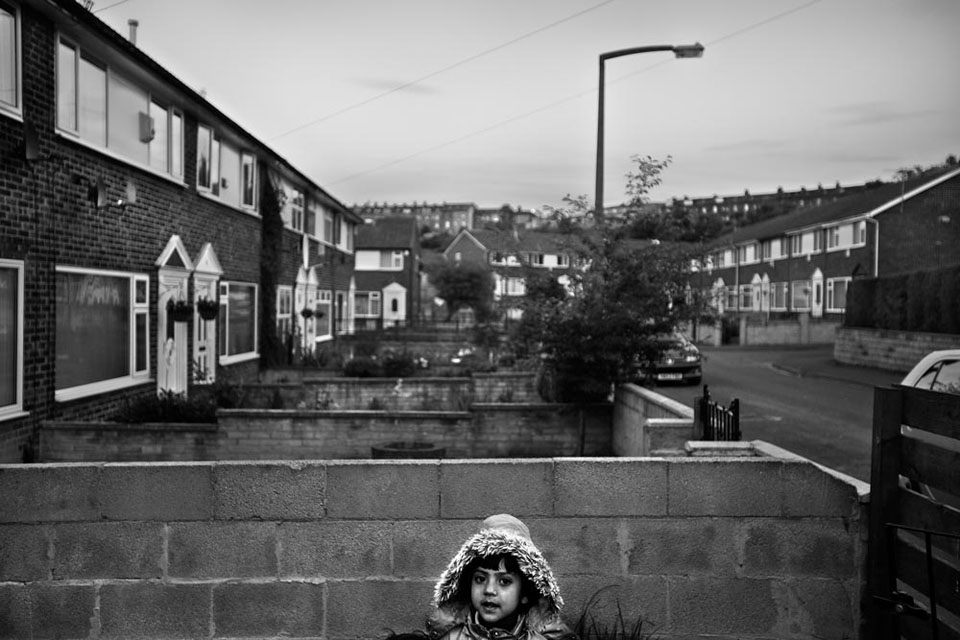 For Rimi, Bradford, England, is a wonderland. For her and her family it still feels more like a dream than reality when compared with the life they led in refugee camps. The opportunity to resettle in the West is like winning the lottery for the lucky few Rohingyas who get to do so. 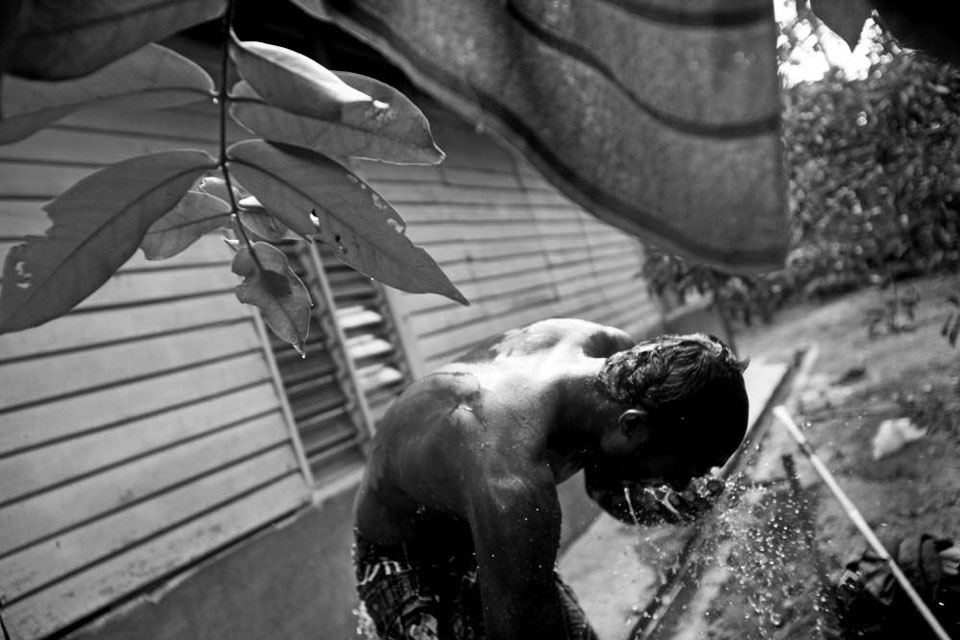 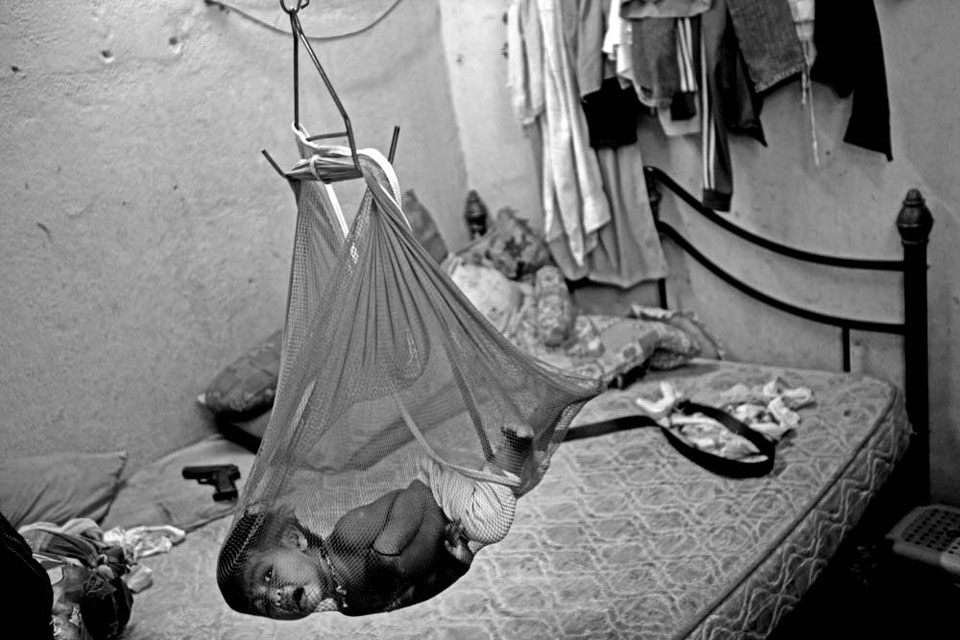 A Rohingya child, born in Malaysia. He, like his parents, is considered an illegal immigrant here. 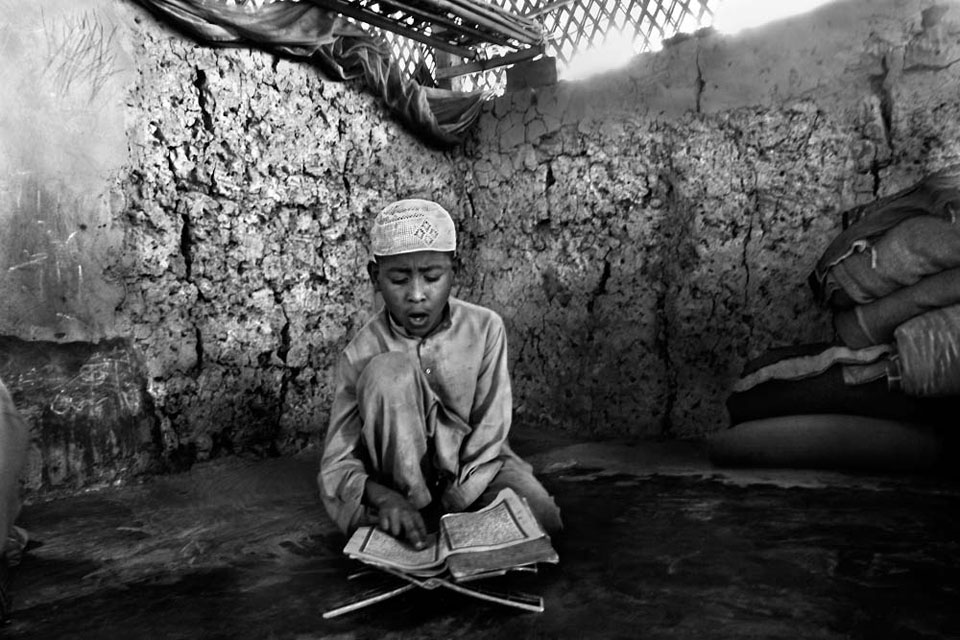 A Young Rohingya boy studies the Koran at one of the many Madrashas in the Coxs Bazar refugee camp in Chittagong, Bangladesh. 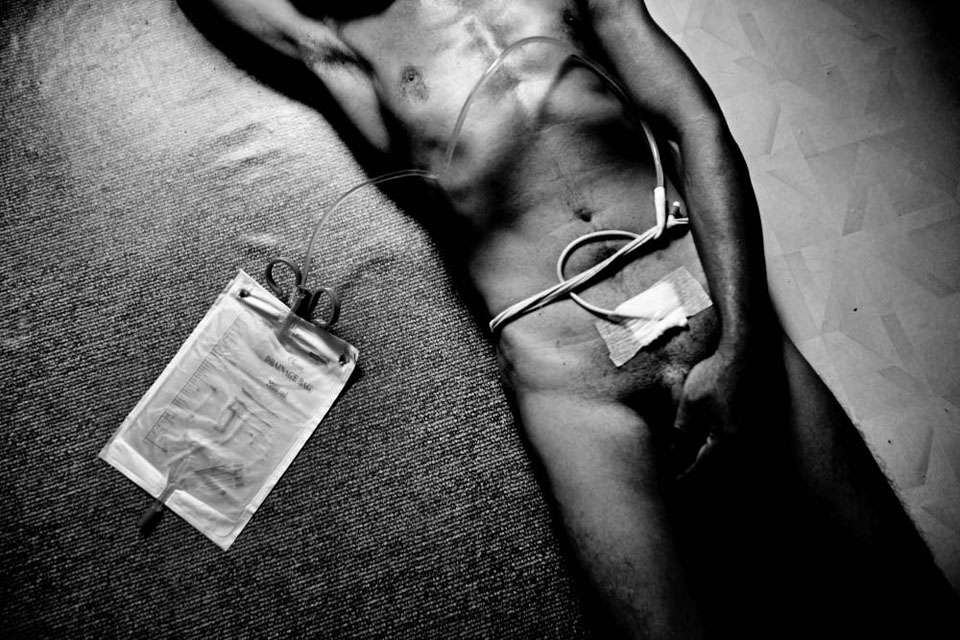 Abu Yusuf used to work in the construction industry. In 2009, he fell from a two story building while working as a laborer, leaving him with three broken ribs and other internal injuries. He underwent operations; he still needs another to make his urinary tract work properly. But his 12-year-old son has since been diagnosed with blood cancer—and now the family has to choose which of them will get care, as they do not have enough money for both father and son. 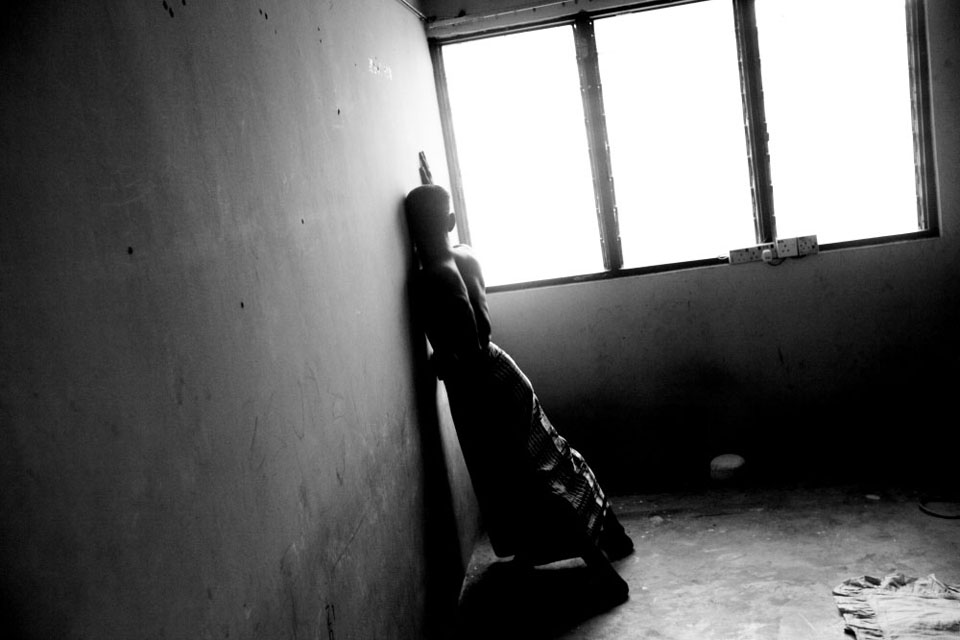 Amin wakes up each morning with acute pain in his back; several years ago, he too suffered injuries in an accident while working on a construction site. 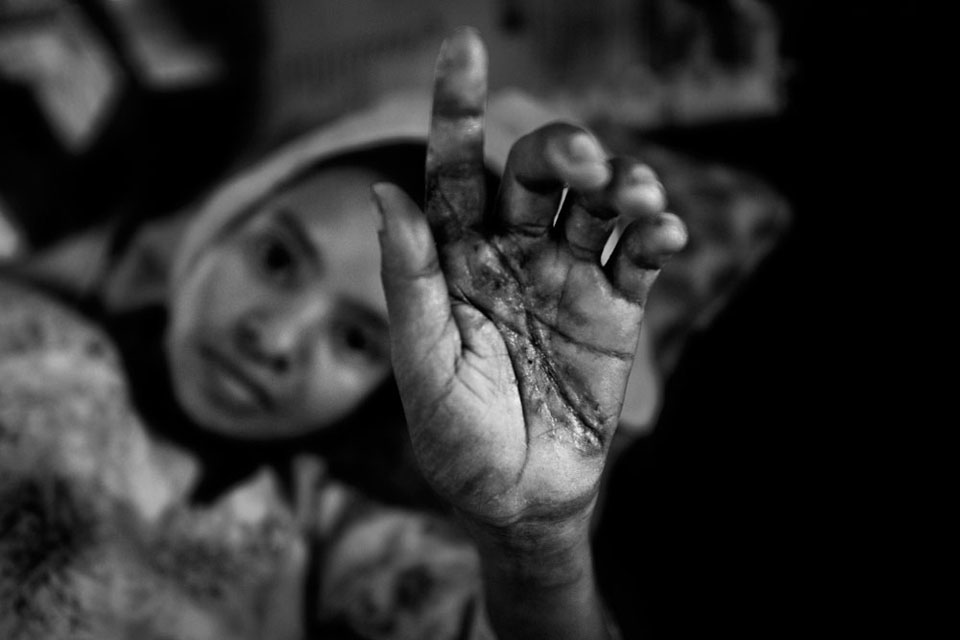 “Fatima Begum” (pseudonym) tried to save her daughter, “Anwara Khatun” (pseudonym), from her stepfather, who tried to rape the 12-year-old several times. The stepfather took revenge, stabbing Fatima seven times. A few days after this photograph was taken, Fatima died in a hospital in Dhaka. 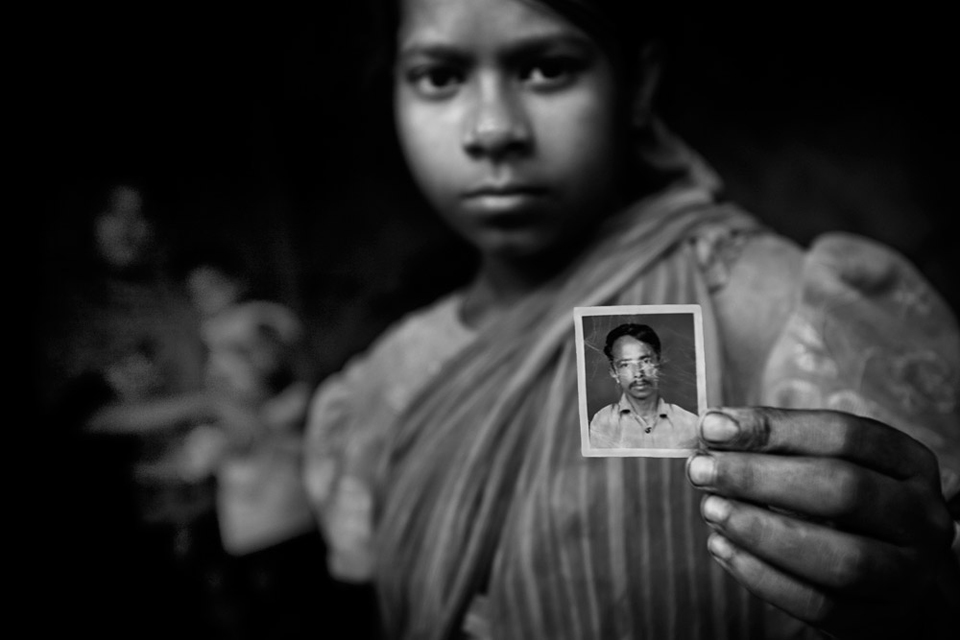 “Anwara Khatun” (pseudonym), now an orphan, with a photograph of her stepfather. A case has been filed against him for the murder of her mother, but he has still not been arrested. 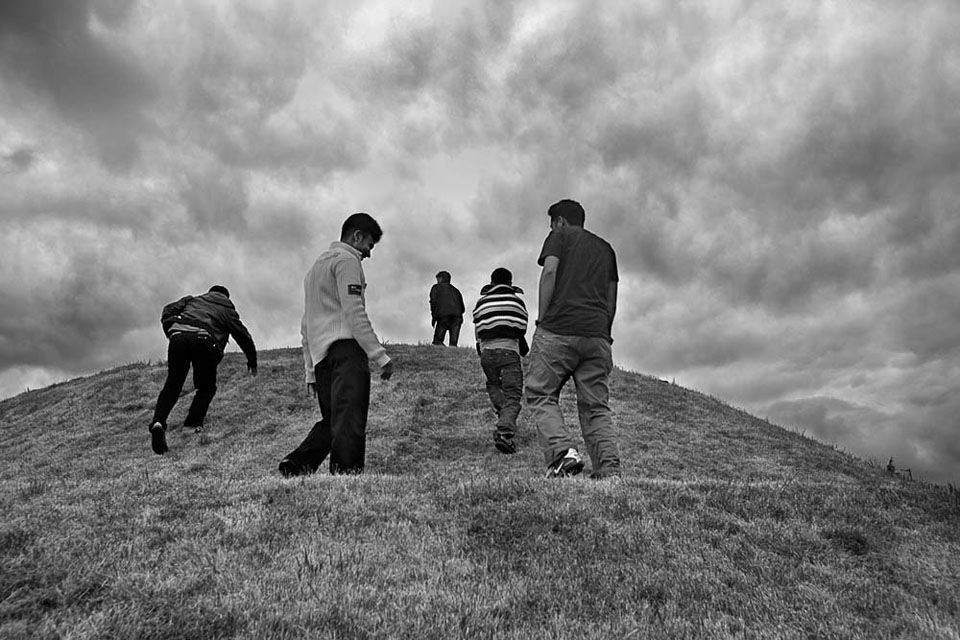 Rohingya men take a walk in a park in Bradford. 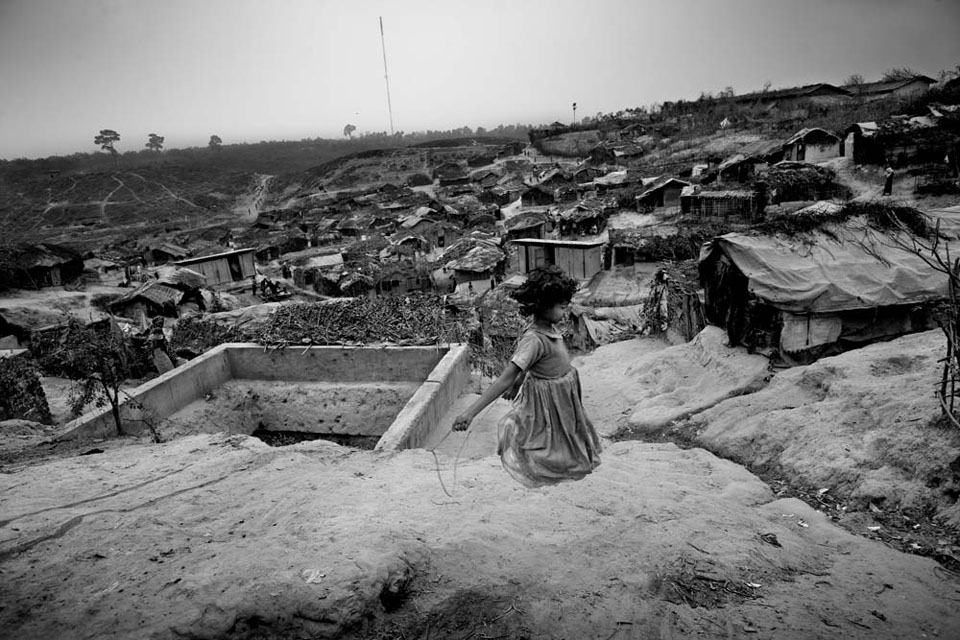 Many children are born and raised in Bangladesh’s Coxs Bazar camp, but they do not have the opportunity to become citizens of Bangladesh. 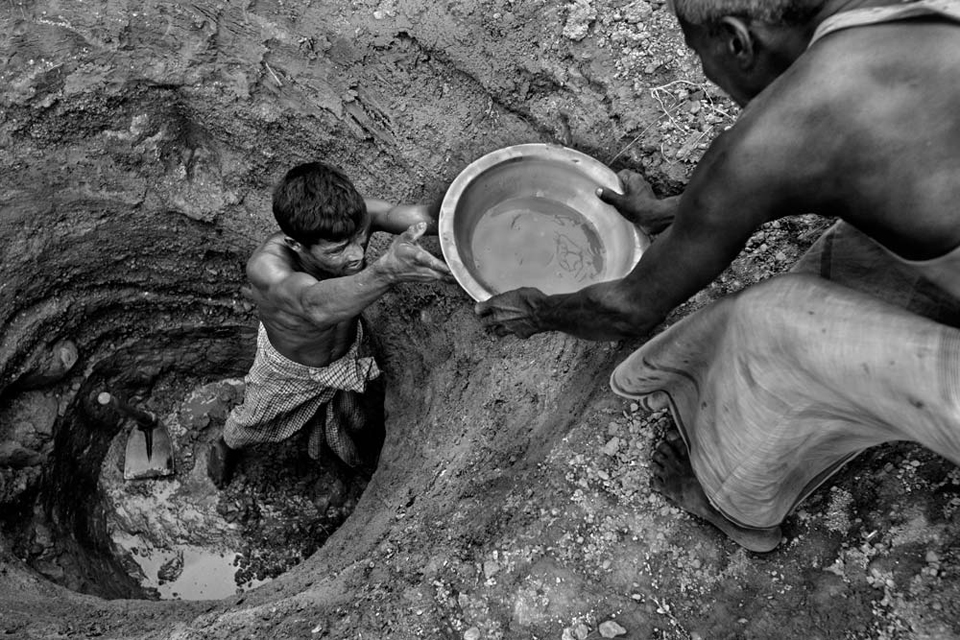 The ground water level is a big problem in and around the Nayapara camp. As a result, water supply is quite irregular in the camp. A man digging a well to get some fresh water has to dig deep. Due to lack of natural water sources, water is distributed through open taps in this camp two times a day: early in the morning and late afternoon. The government of Bangladesh has agreed to allow for excavation of a water reservoir. 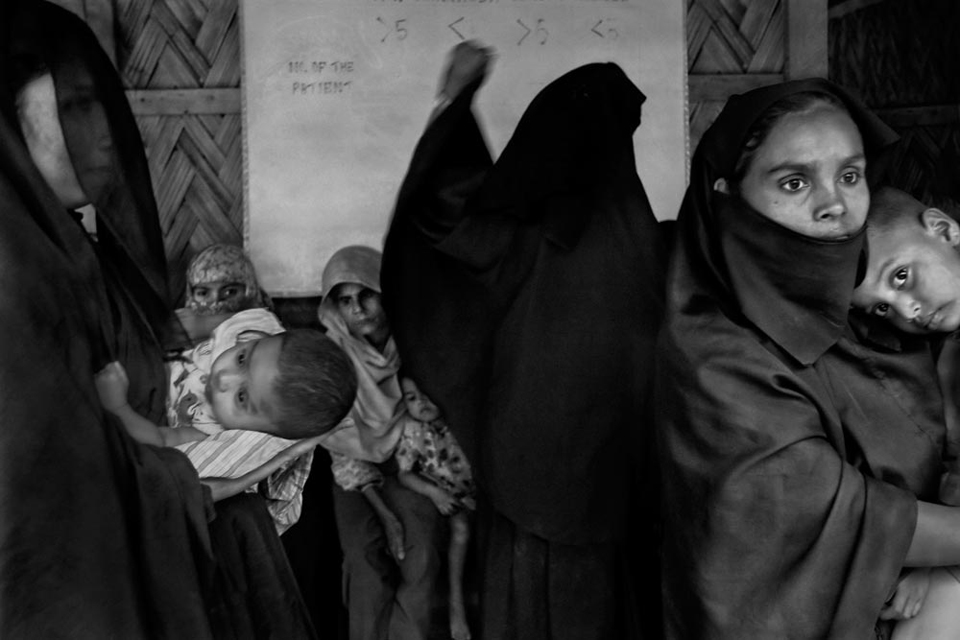 There are medical centers inside the Coxs Bazar camp, but medical resources are meager at best. 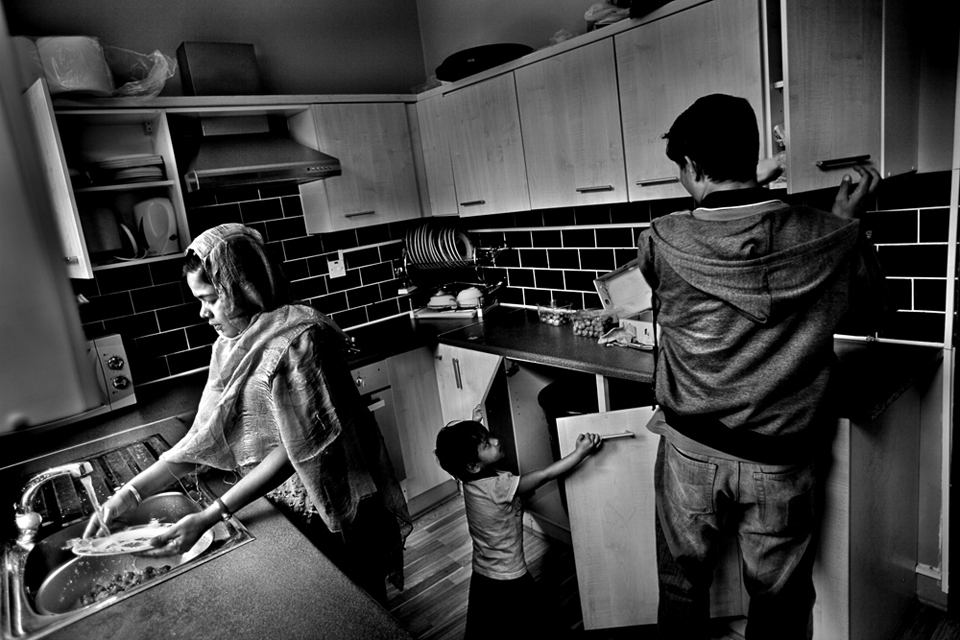 Says Aiub, a resettled Rohingya in Bradford: “You have been to the camps? And you have seen our kitchen! Now we have this. Whenever I think of all this, I thank Allah for the life I have now.” 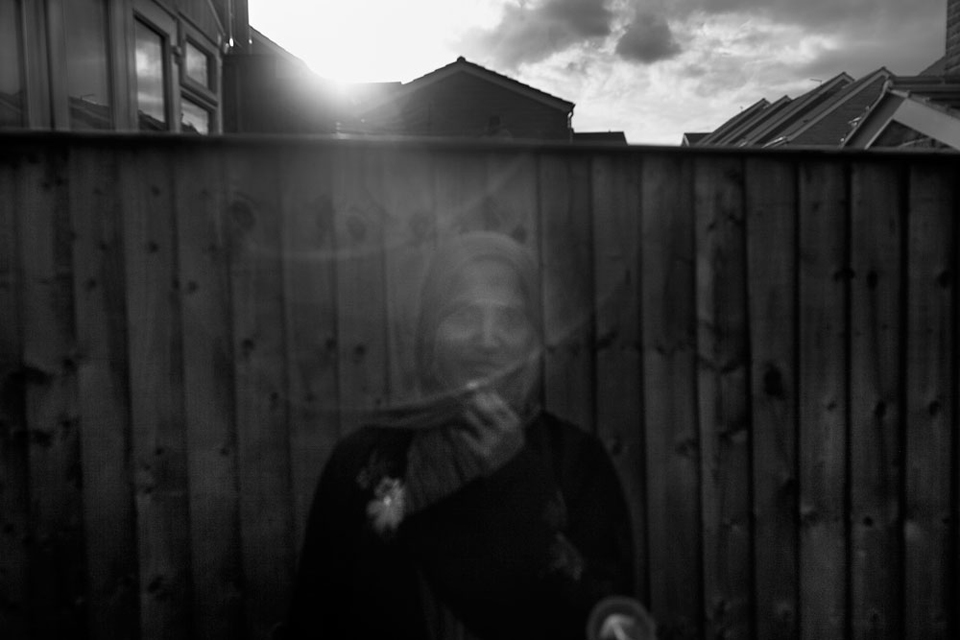 Rahima Khatun is a widow. When she came to Bradford, both she and her daughter were severely sick. They were treated in Bradford and are now healthy.