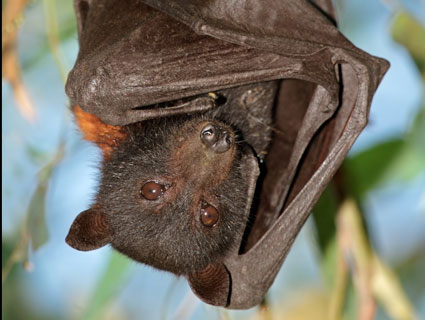 A number of backyard creatures are finding survival a bit more difficult these days. White-nose syndrome has already been linked to more than 5.5 million bat deaths in North America, in what the US Fish & Wildlife Service has called the “worst wildlife health crisis in memory.” Frog populations have seen an increased number of deaths due to a fungal disease. And honeybee populations have also been in decline in recent years due to colony collapse disorder, a phenomenon whose cause scientists are still trying to figure out.

A recent article in Discovery News reports that some experts have come to suspect that the diseases spurring these population declines may be linked. Researchers list a number of potential factors that might be causing these species to be more susceptible to disease, like habitat loss, climate change, and pesticide use:

“It appears that many species are under an immense amount of stress, allowing opportunistic diseases to take hold,” Rob Mies, executive director of the Organization for Bat Conservation, told Discovery News. “Life is far more complex, so a single cause is likely not the only explanation for the bat, bee and frog deaths. There could be five, six or more factors involved.”

The Discovery article notes the importance of these species to the nation’s agriculture industry:

Both bees and bats are critical to agriculture. Bats, like bees, can help to pollinate. They are also a primary predator of agricultural and other insect pests, such as mosquitoes. Frogs additionally consume insect pests.

Even if you don’t care about bats, bees, or frogs, you probably do care about food. Which makes these deaths—and their cause—a big concern.