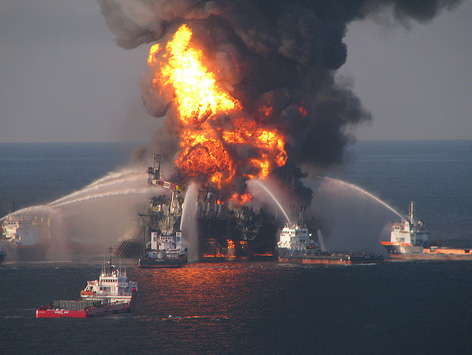 Two years after the Deepwater Horizon dumped nearly 5 million barrels of oil into the Gulf of Mexico, some of the scientists who tried to figure out how much oil escaped are facing legal scrutiny. BP has subpoenaed the emails of Christopher Reddy and Richard Camilli, scientists at the Woods Hole Oceanographic Institution who conducted research on the oil spill flow rate back in 2010.

During the spill, both BP and the Coast Guard requested Reddy and Camilli’s help in determining the flow rate, which was crucial to understanding how much oil was pouring into the Gulf. The two scientists—and other researchers brought on to come up with an estimate—determined that the rate was about 57,000 barrels of oil per day. Now the federal government has brought a lawsuit against BP for the disaster, and the scientists are caught in the middle. The suit could cost BP billions in fines, and the company has requested access to the scientists’ records. Reddy and Camilli have already turned over 50,000 pages of documents, data, and algorithms they used in their research, but BP wants more—it also wants all their emails, and the court has consented.

The two coauthored an op-ed in the Boston Globe on Sunday criticizing this development and expressing concern that their email conversations would be used to undermine their scientific conclusions:

Our concern is not simply invasion of privacy, but the erosion of the scientific deliberative process.

Deliberation is an integral part of the scientific method that has existed for more than 2,000 years; e-mail is the 21st century medium by which these deliberations now often occur. During this process, researchers challenge each other and hone ideas. In reviewing our private documents, BP will probably find e-mail correspondence showing that during the course of our analysis, we hit dead-ends; that we remained skeptical and pushed one another to analyze data from various perspectives; that we discovered weaknesses in our methods (if only to find ways to make them stronger); or that we modified our course, especially when we received new information that provided additional insight and caused us to re-examine hypotheses and methods.

In these candid discussions among researchers, constructive criticism and devil’s advocacy are welcomed. Such interchange does not cast doubt on the strengths of our conclusions; rather, it constitutes the typically unvarnished, yet rigorous, deliberative process by which scientists test and refine their conclusions to reduce uncertainty and increase accuracy. To ensure the research’s quality, scientific peers conduct an independent and comprehensive review of the work before it is published.

This is a deeply concerning development, as this would not be the first time that private correspondence was used to undermine scientific findings. Anyone remember Climategate, in which debates between researchers was used to undermine the science behind global warming? In this case, a private company would have access to scientists’ personal emails, which could then be taken out of context and used to undermine their work. It’s damaging not just for their research on the BP spill, but for science on any number of other subjects.