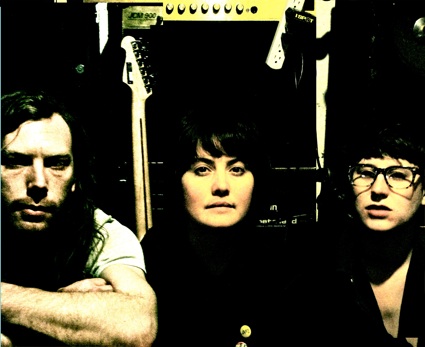 Never heard of Broken Water? Neither had I until I listened this great new album from the Olympia, Washington, trio—and couldn’t stop listening. Drummer Kanako Pooknyw, guitarist Jon Hanna, and bassist Abigail Ingram have played countless live shows in their rainy college town and put out a couple of well-received records; Tempest, out on the sub-Sub Pop label Hardly Art, is their second full-length effort. The stormy, jagged aesthetic conjured by the band’s name, album title, and lyrics is well-suited to the band’s dark, tumultuous music—heavy, melancholic, melodic rock in the great Pacific Northwest tradition, with evident nods to grunge, post-punk, no wave, and shoegaze, but ultimately a sound all their own.

While blurry noise rock isn’t always the catchiest music, this album hooked me from the first beat. “Drown” opens almost mid-lyric, throwing you headlong into a current of Pooknyw drone-singing lyrics that are hard to make out but haunting where decipherable—”doesn’t matter what you’ve done / doesn’t matter where you’re from,” she lulls, “when you’ve drowned in the ocean”—over a mildly spooky beat before the first torrent of sound hits you about a minute in. Broken Water has clearly honed what Kurt Cobain famously described as the “soft and quiet, then loud and hard” style of bands like the Pixies, and it’s a structure they repeat inventively throughout the album.

Hanna takes over vocals on the aggressive “Coming Down,” which repeats some of the death-by-water lyricism—”look up because it’s coming down / stand up or you’re gonna drown”—as the tempo and intensity gradually build into a fury before subsiding back into calm. The drowning theme returns yet again—not for the last time—in the subdued “Yanka Dyagileva,” named for a late-’80s-era Russian poet and punk-folk singer-songwriter who was found dead in the Inya River near her family’s home in 1991. (The band apparently has an affinity for female Russian punks: A few weeks ago they played an Olympia show in support of Pussy Riot, the Russian feminist punk collective that was recently arrested and charged with “hooliganism” for an anti-Putin prank-protest.)

The pace picks up with “Underground,” a blistering deluge of murky punk that’s the closest that Tempest gets to straight grunge, then slows back down with the surprisingly beautiful “Some Thread to Connect,” whose langorous melody swells into a jumble of noise that almost, but doesn’t quite, overwhelm Pooknyw’s crooning singsong. “Chantal,” the penultimate track, is a classic shoegaze ballad, saturated with distortion and drone, with a distant Pooknyw singing as though from the bottom of the Pacific. Closing song “When You Said” starts off with low-key acoustic strumming but is gradually overwhelmed by a distorted fuzz that rises from beneath before breaking into an absolutely crushing riff, leaving behind a wake of wavering guitars and Hanna’s tremulous voice.

This is a band that’s clearly not afraid of big sounds—epic solos, monster riffs, effects atop effects. And it’s one that knows how to deploy those classic tropes without being static or dogmatic—you don’t have to be from Cascadia to love the hell out of the music that results. Broken Water may not be well known outside its hometown quite yet, but that seems likely to change. If you live on the West Coast, you can catch them on tour over the next couple of weeks.