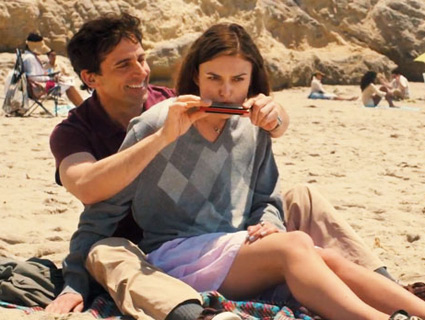 Dodge (played by Steve Carell), on the other hand, gets sedated and very, very mopey. So does Penny (Keira Knightley), Dodge’s neighbor. In the midst of all the oh-shit-the-world’s-coming-to-an-end commotion, the two strangers forge an unlikely bond, flee the city in Penny’s Prius, and go on an adventure looking for Dodge’s old flame. Thus kicks off their surprising road trip, set against the darkly humorous backdrop of imminent apocalypse.

Seeking a Friend serves as a welcome reminder that—during the summer season dominated by the big, the noisy, and the expensively high-tech—smaller, tender films can still stick the landing, while also maintaining a commercially accessible edge. The chemistry between Carell and Knightley is undeniable. The soundtrack is fantastic. The story is big on sentiment, and thankfully low on sap. And the movie—written and directed by Lorene Scafaria, the woman behind 2008’s Nick and Norah’s Infinite Playlist—has indie cred coming out of its ears. Hell, even the title is too cool for school (presumably taken from the chorus of “Preaching the End of the World,” an achingly beautiful song from Chris Cornell’s album Euphoria Morning). [Spoiler to follow.]

That stuff is great and all, but Dodge also gets to have sex with Penny in a car in public. Which calls to mind a question: What’s up with the recent trend of Steve Carell movies in which his character makes sweet, ardent love to a woman decades his junior? (The actor turns 50 in August.)

So what gives? Is there a my-love-interest-must-be-way-younger clause stipulated in his contract, or something? I asked Lorene Scafaria, the film’s writer/director. Here’s what she had to say:

He often can’t believe who he’s playing opposite. He’s often phrased it like, “How dare I get to kiss Marisa Tomei or Keira Knightley!?” [The trend is] unfortunately not on purpose, and he probably wants to crawl out of his skin thinking about it. But nevertheless…lucky man!

So there you have it: In spite of all evidence to the contrary, Steve Carell probably doesn’t have a special midlife-crisis clause in his contract. I’ll update this post if any evidence suggesting otherwise emerges.

In the meantime, here’s a clip of actress Gillian Jacobs (Britta Perry in Community) “rollin’ pretty hard,” with major cocaine eyes, during a restaurant scene with Knightley and Carell in Seeking a Friend. Like many others in this film, it’s a keeper:

Seeking a Friend for the End of the World gets a wide release on Friday, June 22. The film is rated R for language including sexual references, some drug use and brief violence. Click here to get local showtimes and tickets.