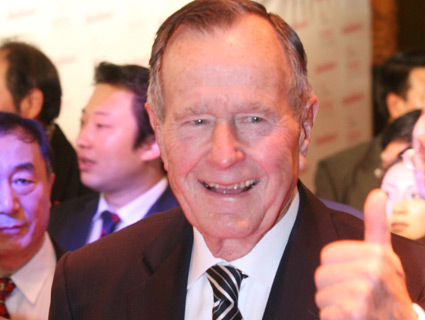 "Our love needs a transfusion, so let's shoot it full of wine!"Wang Jianwei/ChinaFotoPress/ZUMA Press

The documentary—premiering Thursday at 9 p.m. EST on HBO—two days after the ex-prez celebrated his 88th birthday—is a hideously fawning look at the man and his career. (This might have had something to do with the fact that the film was executive-produced by Jerry Weintraub, a Hollywood Walk-of-Famer with close ties to the Bush family.)

With a career in public service as rich and controversial as that of Bush, any competent documentarian would have more than enough to drool over. Where to begin? Iran-Contra, perhaps? The brutal campaign blitzes engineered by Lee Atwater, maybe? Operation Just Cause?

To hell with all that! Director Jeffrey Roth and his crew are too busy showcasing an 87-year-old George Bush hobbling around the family estate and talking about how much he loves his tiny pet dog Bibi. Also, he spends a lot of time boating, so much so that Former President George H.W. Bush is ON A BOAT TAKE A GOOD HARD LOOK AT THE MOTHERFUCKING BOAT would have been a usable alternative title.

While 41 makes for a bland film, it does have potential. That is, if you make it interactive. Thus, the George H.W. Bush Horrible HBO Documentary Drinking Game.

Take one shot for… (recommended beverages: Bulleit, Bagpiper, and The Kraken)

Down two shots for… (recommended: L’CHAIM, Voodoo Tiki, and Hibiki)

Finish your beer for… (recommended: Singha, Pliny the Elder, and Natty Light)

Now, if you’re still upright, check out this video of executive producer Jerry Weintraub getting interviewed by…one of the guys who really helped throw H.W. out of office: