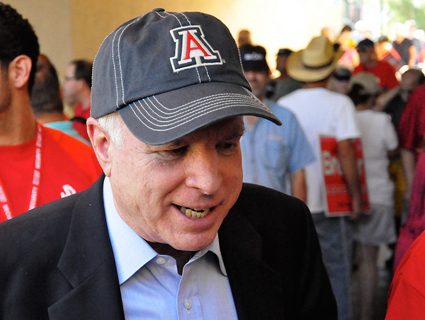 Sen. John McCain (R-Ariz.) appeared on PBS’s Newshour on Thursday and confirmed what we’d hinted at last week: When it comes to campaign finance reform, Mac is back. McCain unloaded on the Supreme Court decisions that opened the floodgates of outside spending, calling Citizens United “the most misguided, naïve, uninformed, egregious decision of the United States Supreme Court in the 21st Century.” But his comments on GOP mega-donor Sheldon Adelson have received the most media attention:

“Much of Mr. Adelson’s casino profits that go to him come from his casino in Macau, which says that obviously, maybe in a roundabout way foreign money is coming into an American political campaign,” McCain said in an interview on PBS’s News Hour.

Really, though? Inserting foreign money into an election is illegal. This was a big deal in the 1990s when foreign nationals were caught funneling money to benefit Democrats. But McCain is talking about something different. His argument is that Adelson is injecting foreign money into the campaign by…duping Chinese tourists into playing his slot machines. How, exactly, would one go about cracking down on this kind of thing? Would it apply to people who sell fake Rolexes to tourists in Battery Park too? With Adelson reportedly considering spending a “limitless” amount of money electing Romney, there’s plenty to worry about, but McCain’s barking up the wrong tree on this one. The true issue is not the source of Adelson’s wealth—assuming his money is all legit—but the fact that one multi-billionaire can dump tens of millions of dollars, if not more, into the race and possibly tip the scales. This is not about China. This is a made-in-the-USA problem.