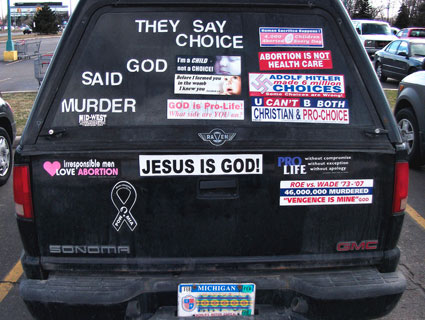 In what the ACLU of Michigan has called the “greatest assault on reproductive rights” in the state’s history, Michigan lawmakers are pushing a slew of anti-abortion measures they’ve rolled into a single legislative package.

Shaughnessy’s proposal is modeled after bills that have passed in six states around the country already, and it only includes an exception if the woman’s life is at stake. Rendon’s bill requires abortion providers to meet the same standards as “ambulatory surgical centers.” Abortion rights groups in the state say this law, often referred to as “targeted regulation of abortion providers” (or TRAP), would likely shut down all abortion providers in the state. Other provisions of the bill require a doctor to be physically present to dispense abortion drugs (which would basically outlaw the use of telemedicine abortions). The proposal also implements new procedures for disposal of fetal remains that, instead of treating them like other forms of medical waste, would require them to be treated like the body of a dead person.

Lawmakers are considering the bills together, and a House committee approved them this week. Over at RH Reality Check, writer Angi Becker Stevens notes that this anti-abortion “super bill” threatens “to create in one fell swoop serious barriers for both women in need of abortion care and abortion providers.”