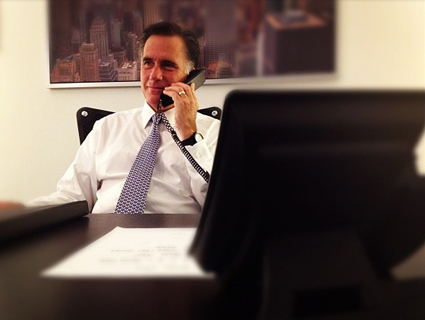 It’s tough to cover—or simply follow—a presidential election without growing deeply cynical about the whole process. So rather than fighting it, we’re going to just come clean: Politicians often don’t mean what they say, or, more charitably, they say what they mean but they mean something completely different than what you think.

Mitt Romney is no exception—which is why we’re unveiling Mitt Romney’s Devil’s Dictionary, a new running feature to help you better understand what Mitt Romney means when he says (for example), “Our president doesn’t have the same feelings about American exceptionalism that we do.” Unlike the original Ambrose Bierce offering, we can’t promise that it will be clever, witty, or darkly humorous, but it is, nonetheless, a dictionary. And it will, at least, be updated. Here’s a start:

Apologize v. 1. Something one should never do, even in effort to minimize the diplomatic fallout from freak accidents like accidentally burning the Koran in a country you’ve occupied for 10 years. 2. To admit weakness. 3. Something Mitt Romney does not do. E.g. “I do not apologize.”

Donut n. 1. A chocolate goodie. 2. Something political reporters talk about to fill dead air. E.g. “Can you see that one of those, um, chocolate goodies finds its way to our ride.”

Exceptionalism n. 1. Something Barack Obama does not believe in, notwithstanding his repeated insistence that America holds a unique place in the world and that his own personal narrative could not have been happened anywhere else. E.g. “Our president doesn’t have the same feelings about American exceptionalism that we do.”

Out of Touch: n. 1. A charge leveled against one’s opponent, often uttered while speaking at a fundraiser held inside a mansion. E.g. “At a $2,500-per-person fundraiser at Isleworth Country Club in suburban Orlando, Republican presidential candidate Mitt Romney berated President Barack Obama for being out of touch with middle-income Americans.”

People n. 1. A corporation. E.g. “Corporations are people, my friends!”

Pizza n. 1. An American dish comprised of a doughy crust, tomato sauce, and cheese, in which the cheese has been scraped off.

Retire v. 1. To remain active. 2.) To maintain a part-time role at a company while retaining full ownership, signing off on key documents, and taking a six-figure salary. e.g. “Mr. Romney retired from Bain Capital on February 11, 1999 to head the Salt Lake Organizing Committee.”

Small government n. 1. A governing philosophy in which the federal government expands its regulation of marriage and women’s bodies and increases funding for overseas military expeditions.

Tree n. 1. A tall leafy plant native to Michigan. Should be approximately 24 feet tall and deciduous. E.g. “The trees are the right height.” 2. Mitt Romney. E.g. “What kind of tree is that? It’s a Mitt Romney tree!”

Unemployed n. Running for president. E.g. “I should tell you my story: I’m also unemployed.”

Varmints n. 1. The most dangerous game. E.g. “I’ve always been, if you will, a rodent and rabbit hunter, small varmints if you will.”

Venn diagram n. 1. A chart featuring two circles, in which the overlapping portion represents the difference between the two.

Water n. 1. Something Mitt Romney loves. E.g. “I love the Great Lakes. You know, we’ve been to Massachusetts. I love the ocean, too. I do love the ocean.” See also: scouting, pie.