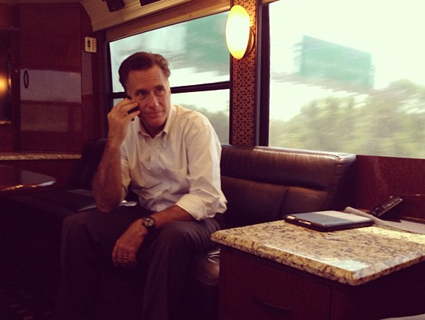 Mitt Romney was speaking to a Texas audience about job creation last week when the subject turned to sport. “I met a guy yesterday, seven feet tall,” he said on Wednesday at Southwest Office Systems in Fort Worth. “Yeah, handsome, great big guy, seven feet tall! Name is Rick Miller—Portland, Oregon. And he started a business. Of course you know it was in basketball. But it wasn’t in basketball! I mean, I, figured he had to be in sport, but he wasn’t in sport.”

This is funny, because who talks like that? Mitt Romney. Mitt Romney talks like that. I’ve just started reading the candidate’s 2004 book, Turnaround, and it turns out that his vaguely 19th-century aristocratic quirk of referring to sports in the singular is a longstanding habit. A quick Google Books scan reveals 33 results for “sport,” almost all of them instances where one would normally write “sports” instead.

On page 197: “In addition to my disappointment over their effort to get more American kids into sport, I chafed at the dollars going to the USOC as part of our joint marketing agreement.” On page 276: “He explained that in Norway, it was against national law to serve alcohol in sport venues. The logic was that they did not wish youth to associate alcohol with sport.” On page 6: “I could think of a dozen individuals with more relevant sport management experience.” Page 71: “Don had a long history in sport.” Page 157: “We were seeking approval for seven new sport events including women’s bobsled and men’s and women’s skeleton.” Page 34, quoting himself: “‘The Olympics is about sport, not business,’ I said.” It even continues on to his more recent 2010 volume, No Apology, where he writes, “Ted Williams famously said that the hardest thing to do in sport is hit a baseball…” Tally-ho good sir, wot wot!

There seem to be a few likely explanations for why Romney says “sport.” He has a number of other anachronistic rhetorical tics—starting sentences with “why” when not asking a question, for instance. As this chart demonstrates, the use of “sport” went out of fashion in the United States in the mid-20th century:

Sport v. sports in American English, 1800–2000 Google BooksRomney’s most intense, er, sports experience centered on his involvement in the Olympic games, in which sports are often referred to as “sport.” And he spent his missionary years in France, where the singular “sport” is much more common. (No one is suggesting that there’s anything wrong with adopting cultural speech practices from the godless, socialist French.)

Sport v. sports in French, 1800–2000 Google BooksAnyway, all of this is totally inconsequential. You might just say it’s all fun and game. But now you know.