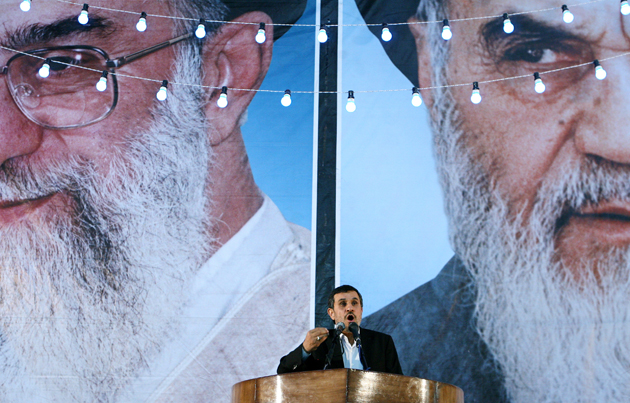 Since talks with Iran over its nuclear development started up again in April, US officials have repeatedly warned that Tehran will not be allowed to “play for time” in the negotiations. In fact, it is the Obama administration that is playing for time.

Some suggest that President Obama is trying to use diplomacy to manage the nuclear issue and forestall an Israeli strike against Iranian nuclear targets through the US presidential election. In reality, his administration is “buying time” for a more pernicious agenda: time for covert action to sabotage Tehran’s nuclear program; time for sanctions to set the stage for regime change in Iran; and time for the United States, its European and Sunni Arab partners, and Turkey to weaken the Islamic Republic by overthrowing the Assad government in Syria.

Vice President Biden’s national security adviser, Antony J. Blinken, hinted at this in February, explaining that the administration’s Iran policy is aimed at “buying time and continuing to move this problem into the future, and if you can do that—strange things can happen in the interim.” Former Pentagon official Michele Flournoy—now out of government and advising Obama’s reelection campaign—told an Israeli audience this month that, in the administration’s view, it is also important to go through the diplomatic motions before attacking Iran so as not to “undermine the legitimacy of the action.”

New York Times‘ journalist David Sanger recently reported that, “from his first months in office, President Obama secretly ordered increasingly sophisticated attacks on the computer systems that run Iran’s main nuclear enrichment facilities, significantly expanding America’s first sustained use of cyberweapons”—even though he knew this “could enable other countries, terrorists, or hackers to justify” cyberattacks against the United States. Israel—which US intelligence officials say is sponsoring assassinations of Iranian scientists and other terrorist attacks in Iran—has been intimately involved in the program.

Classified State Department cables published by WikiLeaks show that, from the beginning of the Obama presidency, he and his team saw diplomacy primarily as a tool to build international support for tougher sanctions, including severe restrictions on Iranian oil exports. And what is the aim of such sanctions? Earlier this year, administration officials told the Washington Post that their purpose was to turn the Iranian people against their government. If this persuades Tehran to accept US demands to curtail its nuclear activities, fine; if the anger were to result in the Islamic Republic’s overthrow, many in the administration would welcome that.

Since shortly after unrest broke out in Syria, the Obama team has been calling for President Bashar al-Assad’s ouster, expressing outrage over what they routinely describe as the deaths of thousands of innocent people at the hands of Syrian security forces. But, for more than a year, they have been focused on another aspect of the Syrian situation, calculating that Assad’s fall or removal would be a sharp blow to Tehran’s regional position—and might even spark the Islamic Republic’s demise. That’s the real impetus behind Washington’s decision to provide “non-lethal” support to Syrian rebels attacking government forces, while refusing to back proposals for mediating the country’s internal conflicts which might save lives, but do not stipulate Assad’s departure upfront.

Meeting with Iranian oppositionists last month, State Department officials aptly summarized Obama’s Iran policy priorities this way: the “nuclear program, its impact on the security of Israel, and avenues for regime change.” With such goals, how could his team do anything but play for time in the nuclear talks? Two former State Department officials who worked on Iran in the early months of Obama’s presidency are on record confirming that the administration “never believed that diplomacy could succeed”—and was “never serious” about it either.

How Not to Talk to Iran

Simply demanding that Iran halt its nuclear activities and ratcheting up pressure when it does not comply will not, however, achieve anything for America’s position in the Middle East. Western powers have been trying to talk Iran out of its civil nuclear program for nearly 10 years. At no point has Tehran been willing to surrender its sovereign right to indigenous fuel cycle capabilities, including uranium enrichment.

Sanctions and military threats have only reinforced its determination. Despite all the pressure exerted by Washington and Tel Aviv, the number of centrifuges operating in Iran has risen over the past five years from less than 1,000 to more than 9,000. Yet Tehran has repeatedly offered, in return for recognition of its right to enrich, to accept more intrusive monitoring of—and, perhaps, negotiated limits on—its nuclear activities.

Greater transparency for recognition of rights: this is the only possible basis for a deal between Washington and Tehran. It is precisely the approach that Iran has advanced in the current series of talks. Rejecting it only guarantees diplomatic failure—and the further erosion of America’s standing, regionally and globally.

George W. Bush’s administration refused to accept safeguarded enrichment in Iran. Indeed, it refused to talk at all until Tehran stopped its enrichment program altogether. This only encouraged Iran’s nuclear development, while polls show that, by defying American diktats, Tehran has actually won support among regional publics for its nuclear stance.

Some highly partisan analysts claim that, in contrast to Bush, Obama was indeed ready from early in his presidency to accept the principle and reality of safeguarded enrichment in Iran. And when his administration failed at every turn to act in a manner consistent with a willingness to accept safeguarded enrichment, the same analysts attributed this to congressional and Israeli pressure.

In truth, Obama and his team have never seriously considered enrichment acceptable. Instead, the president himself decided, early in his tenure, to launch unprecedented cyberattacks against Iran’s main, internationally monitored enrichment facility. His team has resisted a more realistic approach not because a deal incorporating safeguarded enrichment would be bad for American security (it wouldn’t), but because accepting it would compel a more thoroughgoing reappraisal of the US posture toward the Islamic Republic and, more broadly, of America’s faltering strategy of dominating the Middle East.

Acknowledging Iran’s right to enrich would require acknowledging the Islamic Republic as a legitimate entity with legitimate national interests, a rising regional power not likely to subordinate its foreign policy to Washington (as, for example, US administrations regularly expected of Egypt under Anwar Sadat and Hosni Mubarak). It would mean coming to terms with the Islamic Republic in much the same way that the United States came to terms with the People’s Republic of China—another rising, independent power—in the early 1970s.

Two former State Department officials who worked on Iran…[said] that the administration “never believed that diplomacy could succeed.”

America’s Iran policy remains stuck in a delusion similar to the one that warped its China policy for two decades after China’s revolutionaries took power in 1949—that Washington could somehow isolate, strangle, and ultimately bring down a political order created through mass mobilization and dedicated to restoring national independence after a long period of Western domination. It didn’t work in the Chinese case and it’s not likely to in Iran either.

In one of the most consequential initiatives in American diplomatic history, President Nixon and Henry Kissinger finally accepted this reality and aligned Washington’s China policy with reality. Unfortunately, Washington’s Iran policy has not had its Nixonian moment yet, and so successive US administrations—including Obama’s—persist in folly.

The fact is: Obama could have had a nuclear deal in May 2010, when Brazil and Turkey brokered an agreement for Iran to send most of its low-enriched uranium abroad in return for new fuel for a research reactor in Tehran. The accord met all the conditions spelled out in letters from Obama to then-Brazilian President Lula and Turkish Prime Minister ErdoÄŸan—but Obama rejected it, because it recognized Iran’s right to enrich. (That this was the main reason was affirmed by Dennis Ross, the architect of Obama’s Iran policy, earlier this year.) The Obama team has declined to reconsider its position since 2010 and, as a result, it is on its way to another diplomatic failure.

As Middle Eastern governments become somewhat more representative of their peoples’ concerns and preferences, they are also—as in Egypt and Iraq—becoming less inclined toward strategic deference to the United States. This challenges Washington to do something at which it is badly out of practice: pursue genuine diplomacy with important regional states, based on real give and take and mutual accommodation of core interests. Above all, reversing America’s decline requires rapprochement with the Islamic Republic (just as reviving its position in the early 1970s required rapprochement with the People’s Republic of China).

Instead, three and a half years after George W. Bush left office, his successor continues to insist that Iran surrender to Washington’s diktats or face attack. By doing so, Obama is locking America into a path that is increasingly likely to result in yet another US-initiated war in the Middle East during the first years of the next presidential term. And the damage that war against Iran will inflict on America’s strategic position could make the Iraq debacle look trivial by comparison.

Flynt Leverett is professor of international affairs at Penn State. Hillary Mann Leverett is senior professorial lecturer at American University. Together, they write the Race for Iran blog. Their new book, Going to Tehran: Why the United States Needs to Come to Terms With the Islamic Republic of Iran (Metropolitan Books), will be published in January 2013. To stay on top of important articles like these, sign up to receive the latest updates from TomDispatch.com here.