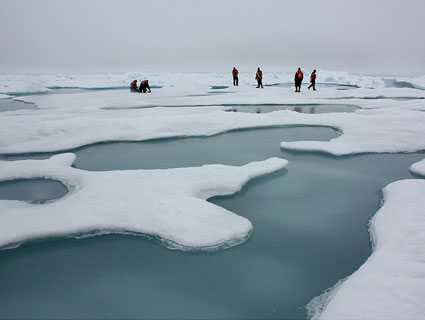 In sun-starved depths where plant life was thought to be impossible, scientists have found a massive phytoplankton bloom—and they think climate change may be allowing it to flourish. The researchers who discovered the 62 mile-long bloom under Artic Sea ice in July 2011 and wrote about in the journal Science last week believe the huge colony of tiny plants owes its existence to sea ice that is melting as a result of climate change.

Kevin Arrigo, a biological oceanographer at Stanford University, and 30 co-authors concluded that during summer months melting ice forms pools of water that focus sunlight through the ice, allowing for growth of photosynthic organisms. Until now, scientists thought photosynthetic organisms could not develop under ice in the Arctic Ocean “because of insufficient light,” according to the study.

The existence of phytoplankton under sea ice means there may be much more life in the Arctic than previously thought. In fact, the scientists note current estimates could be 10 times too low.

The discovery could have a negative impact on the food web, ScienceNOW reported:

Changes in bloom timing might not be good news for migratory animals, such as gray whales traveling from the Gulf of California to feed in the nutrient-rich waters of the Arctic shelf. “The blooms are happening possibly weeks before the ice begins to retreat,” Arrigo says. Timing, he notes, is a really important issue in the Arctic, with its short seasons. “We have no idea how this might be changing those [migratory] patterns.”

“[I]t’s really important for us to understand how this earth we live in is going to change in the face of ongoing changes in climate, and other things that are going on,” Arriago told NPR. “Seeing something like this… is a real wake-up call.”