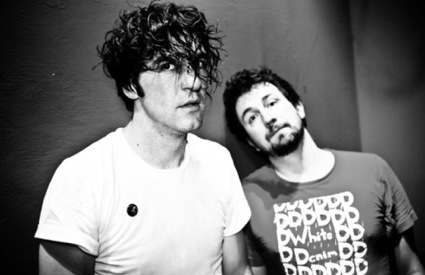 Brian King and Dave Prowse, the longtime friends who make up the Vancouver duo Japandroids, have never been shy about declaring their intentions. With Celebration Rock, the new follow-up to 2009’s surprise hit Post-Nothing, they’re wearing their hearts on the album sleeve. If the title wasn’t enough to clue you in to their subject matter, you need only skim the track listings—”Adrenaline Nightshift,” “Continuous Thunder,” “Fire’s Highway”—to get the gist.

The beautiful-desperate-youth theme is a rock-and-roll tradition, albeit one that’s hard to pull off without seeming melodramatic or clichéd. And this album’s got plenty of drama in many of the standard forms—doomed love affairs, insomniac nights, youthful bodies, highways of fire, heaven and hell, dreams lost and found, all bookended by crackling fireworks. It sort of seems like it should be too much. But Japandroids make the bold imagery and persistent drum fills work, partly because they manage to simultaneously seem incredibly sincere and wryly self-aware without being self-conscious, and partly because they put so much heart into it that you can’t help but go along for the ride. But the band’s accomplishments are more than a trick of attitude—Celebration Rock is 35 minutes of intensely potent, no-holds-barred rock-and-roll glory, each song an expertly executed rush of endorphins and electricity.

After the introductory fireworks fade into the distance, “The Night of Wine and Roses” breaks into a riotously joyful ode to nights spent drinking till dreams come true. “Fire’s Highway” is a driving, melancholy song of love, lust, and life on the road that filters the band’s experiences touring through a mythical, lyrical lens, while “Adrenaline Nightshift” sees Japandroids firing up the guitars while “waiting for a generation’s bonfire to begin.” The album’s climax comes with penultimate song “The House that Heaven Built,” where King fights to hit the defiant notes of an epic packed with emphatic lyrics and a resounding chorus of oh-oh-ohs. And then “Continuous Thunder,” a slow burn of a song whose backing drums slowly become the rumble of fireworks, brings you down easy.

“Younger Us,” a single released in 2010 and included on Celebration Rock, is quintessential Japandroids, full of eminently quotable lines like “Remember saying things like we’ll sleep when we’re dead / And thinking this feeling was never gonna end / Remember that night you were already in bed / said fuck it got up and drank with me instead.” But of course, a younger Japandroids could never write the kinds of songs the older ones do, charged with the fear of age and loss and failure, and all the better for it—celebration rock, but with a perfectly sharpened edge. 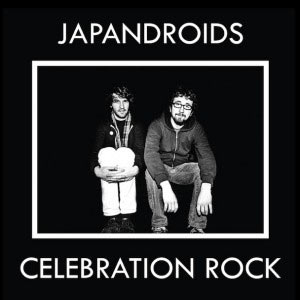 King and Prowse have said the only reason they continued as a band after “having more or less imploded in 2008” was to live their dream of touring; guitarist King once told Pitchfork, “It’s not like I’m this super-creative person who needs to express myself musically—it’s more like we just need to record in order to play more shows.” The stage is clearly where he’s in his element: Just like the record, a Japandroids live show is full of elements of rock glory that could seem passé but instead feel fresh and exciting. And, as on the record, the duo’s willingness to put all of themselves into the music helps them pull it off: several times, King told the audience “I’m leaving everything I got up here, so you’d better leave everything you’ve got down there.” The crowd for the most part obliged, dancing and sweating and following “The Night of Wine and Roses” directive to “yell like hell for the heavens.” To close out the night, instead of an encore, the band played a raucous cover of The Gun Club’s “For the Love of Ivy,” which also appears on the album.

Japandroids are not a band to sit and nod your head to, but if you’re up for a high-energy, low-irony show, I can’t think of many bands more likely to deliver. They’re touring through August, which is as it should be—Japandroids is a band, and Celebration Rock an album, meant for summer nights.