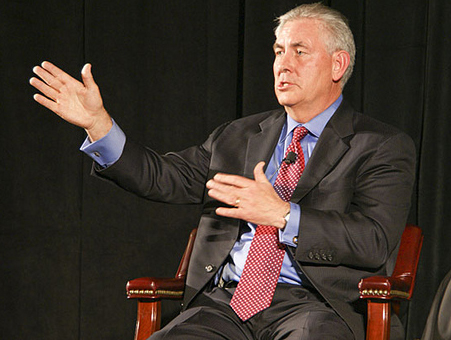 ExxonMobil has never been a big fan of climate science. The largest oil company in the world has been caught funding bad science on climate, and CEO Rex Tillerson has claimed previously that there are “too many complexities around climate science for anybody to fully understand all of the causes and effects.” This week, Tillerson made news by acknowledging that climate change is real, it’s just not that big of a deal.

The Guardian flags a speech Tillerson gave at the Council on Foreign Relations on Wednesday in which he argued that the public is “illiterate,” reporters are “lazy,” and climate models “are not particularly good.” But he did note that climate change is happening:

So I’m not disputing that increasing CO2 emissions in the atmosphere is going to have an impact. It’ll have a warming impact. The — how large it is is what is very hard for anyone to predict. And depending on how large it is, then projects how dire the consequences are.

No worries though, Tillerson thinks the “consequences are manageable” because humans are good at adapting. This is what he told a questioner who expressed concern that burning all those fossil fuels means future generations will suffer:

What do you want to do if we think the future has sea level rising four inches, six inches? Where are the impacted areas, and what do you want to do to adapt to that? And as human beings as a — as a — as a species, that’s why we’re all still here. We have spent our entire existence adapting, OK? So we will adapt to this. Changes to weather patterns that move crop production areas around — we’ll adapt to that. It’s an engineering problem, and it has engineering solutions. And so I don’t — the fear factor that people want to throw out there to say we just have to stop this, I do not accept.

I’m not really sure whether to interpret this as progress on Tillerson’s part.