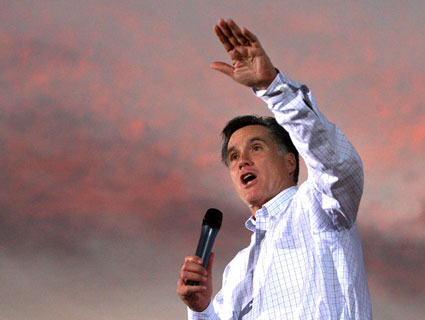 Last month, Mitt Romney’s campaign got into a dustup with the Washington Post after the newspaper reported that Bain Capital, the private equity firm the GOP presidential candidate founded, invested in several US companies that outsourced jobs to China and India. The campaign indignantly demanded a retraction, claiming that these businesses did not send jobs overseas while Romney was running Bain, and the Post stood by its investigation. Yet there is another aspect to the Romney-as-outsourcer controversy. According to government documents reviewed by Mother Jones, Romney, when he was in charge of Bain, invested heavily in a Chinese manufacturing company that depended on US outsourcing for its profits—and that explicitly stated that such outsourcing was crucial to its success.

This previously unreported deal runs counter to Romney’s tough talk on the campaign trail regarding China. “We will not let China continue to steal jobs from the United States of America,” Romney declared in February. But with this investment, Romney sought to make money off a foreign company that banked on American firms outsourcing manufacturing overseas.

On April 17, 1998, Brookside Capital Partners Fund, a Bain Capital affiliate, filed a report with the Securities and Exchange Commission noting that it had acquired 6.13 percent of Hong Kong-based Global-Tech Appliances, which manufactured household appliances in a production facility in the industrial city of Dongguan, China. That August, according to another SEC filing, Brookside upped its interest in Global-Tech to 10.3 percent. Both SEC filings identified Romney as the person in control of this investment: “Mr. W. Mitt Romney is the sole shareholder, sole director, President and Chief Executive Officer of Brookside Inc. and thus is the controlling person of Brookside Inc.” Each of these documents was signed by Domenic Ferrante, a managing director of Brookside and Bain.

The SEC filings do not reveal how much Romney initially invested in Global-Tech (which is now known as Global-Tech Advanced Innovations). But Brookside first acquired 748,000 shares at a time when Global-Tech was mounting an IPO at $19 a share. If that was the purchase price Brookside paid, then Romney’s firm originally invested $14.2 million in the company.

At the time Romney was acquiring shares in Global-Tech, the firm publicly acknowledged that its strategy was to profit from prominent US companies outsourcing production abroad. On September 4, 1998, Global-Tech issued a press release announcing it was postponing completion of a $30 million expansion of its Dongguan facility because Sunbeam, a prominent American consumer products company and a major client of Global-Tech, was cutting back on outsourcing as part of an overall consolidation. But John C.K. Sham, Global-Tech’s president and CEO, said, “Although it appears that customers such as Sunbeam are not outsourcing their manufacturing as quickly as we had anticipated, we still believe that the long-term trend toward outsourcing will continue.” Global-Tech, which in mid-1998 announced fiscal year sales of $118.3 million (an increase of 89 percent over the previous year), also manufactured household appliances for Hamilton Beach, Mr. Coffee, Proctor-Silex, Revlon, and Vidal Sassoon, and its chief exec was hoping for more outsourcing from these and other American firms.

The Romney campaign and Bain Capital have insisted that Romney departed Bain in February 1999 to head the troubled 2002 Winter Olympics in Salt Lake City and had no involvement in the private equity firm’s deals after that point—a contention that has been challenged by the Obama campaign. But the Global-Tech Appliances transactions occurred long before Romney jetted off to Utah.

At the time Romney was acquiring shares in Global-Tech, the firm publicly acknowledged that its strategy was to profit from prominent US companies outsourcing production abroad.

Brookside downsized its Global-Tech holdings later in 1998. An SEC filing submitted on December 21, 1998, reported that the Bain affiliate now controlled only 4.63 percent of the company’s shares. But Brookside was sharing its stake in Global-Tech with Sankaty High Yield Asset Investors LTD—a Bermuda-based corporation of which Romney was the “the sole shareholder, a director, and President.” That is, Romney had split his Global-Tech holdings between two of his various business entities. (The SEC filing doesn’t indicate why he did that.)

Sankaty is a story in itself. It was recently the focus of an Associated Press investigation that reported that Sankaty “is among several Romney holdings that have not been fully disclosed” and that there is a “mystery surrounding” Sankaty. Reporting on this Romney entity, Vanity Fair noted that “investments in tax havens such as Bermuda raise many questions, because they are in ‘jurisdictions where there is virtually no tax and virtually no compliance,’ as one Miami-based offshore lawyer put it.” With Sankaty, Romney was using a mysterious Bermuda-based entity to invest in a Chinese firm that thrived on US outsourcing.

In early 1999, Romney’s investment in Global-Tech expanded again. An SEC report filed on March 25, 1999, stated that Brookside and Sankaty at this stage owned 9.11 percent of the firm’s stock. Romney was still listed as the sole shareholder and president of both Brookside and Sankaty.

By this point, according to the open-to-question account offered by Bain and the Romney campaign, Romney no longer had any involvement in Bain deals. But the series of SEC filings show active Brookside and Sankaty trading in Global-Tech Appliances while Romney fully controlled these firms. The two Romney companies repeatedly changed their ownership stake in this Chinese firm, which was not shy about its dependence on outsourcing. In its 2001 annual report, Global-Tech noted that US outsourcing was essential to its prospects: “Household appliance companies are focusing on their primary strengths of marketing and distribution, while increasingly outsourcing product development and manufacturing…Our ability and commitment to develop new and innovative, high quality products at a low cost has allowed us to benefit from the increased outsourcing of product development and manufacturing by our customers.”

In August 2000, Brookside and Sankaty sold their interest in Global-Tech, according to the SEC documents. With these filings disclosing minimum details about Romney’s investment in Global-Tech, there is no telling how much money he made—or lost—on the deal.

A spokeswoman for Bain says that the company will not comment on the Global-Tech investment or provide any additional details about this deal. A Romney campaign official would not address the issue of Global-Tech profiting from US outsourcing, but this Romney aide maintains that this deal was nothing other than a routine investment in a foreign company: “[I]t’s my understanding that while Brookside is a part of Bain Capital, it is not a private equity vehicle. Brookside makes passive investments in public stock. They don’t control or manage the companies they invest in. Brookside had a small ownership stake (9.11%) in Global-Tech…while Romney was there. If owning shares in a foreign company is somehow wrong, President Obama is guilty as well.” (The Romney campaign points out that Obama’s personal holdings include an investment in a Vanguard 500 Index retirement fund that contains shares in a handful of foreign companies.)

In recent weeks, Romney’s involvement in outsourcing has become a contentious campaign issue. Late last month, the Obama campaign launched ads that accused Romney of being a “corporate raider” who “shipped jobs to China and Mexico” and slammed him as an “outsourcer in chief.” The Romneyites cried foul, pointing to neutral fact-checkers who criticized the ads, and asserted that Obama was trying to distract from bad economic news. And the Romney campaign, pushing back on the Post story, maintained that the newspaper missed the difference between outsourcing and offshoring. This week, Romney declared that Obama was the real “outsourcer-in-chief,” insisting that the president funded “energy companies, solar and wind energy companies that end up making their products outside the United States.” (The New York Times immediately debunked much of Romney’s attack, and the Washington Post‘s “Fact Checker” column awarded four Pinocchios to an Americans for Prosperity ad that in April made a similar claim about Obama and green-jobs outsourcing.)

Romney’s Global-Tech deal adds a new dimension to the debate over Romney and outsourcing. Whether or not he was at the helm when Bain invested in US firms that did or did not ship jobs overseas, Romney was in command when a company he owned and controlled bought a large stake in a Chinese venture that counted on American companies sending manufacturing—and that means jobs—to China. These days, Romney rails against China for swiping American jobs and proclaims, “For me, it’s all about good jobs for the American people.” But when there was money to be made by acquiring a chunk of a Chinese company that aimed to displace American manufacturers (and American workers), Romney’s patriotism did not interfere with the potential for profit.