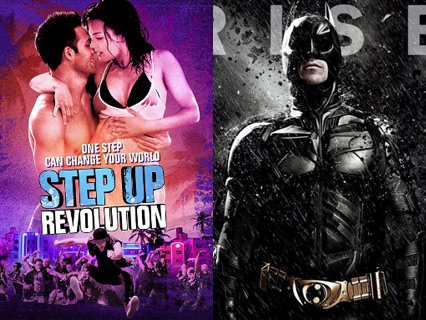 For an hour and forty minutes, this movie wages a jihad on the human capacity for patience. It’s the aggravating cinematic equivalent of playing Dance Dance Revolution with far too many middle-schoolers, all of whom are tripping balls on Gorilla Glue. It’s a paper-thin, stodgily choreographed, criminally acted exercise in how many people from season six of So You Think You Can Dance you can legally fit into one movie.

It’s also a sap-sodden love letter to the working class (in 3D): Coursing through the veins of Step Up‘s cookie-cutter plot is the moral message of impoverished masses rescuing society from excesses of the mega-wealthy. Politically, it is the exact inverse of The Dark Knight Rises. [Mild spoilers to follow.]

TDKR has been interpreted (rather needlessly) as everything from a crafty promo for the Occupy movement to (brace yourself) a cog in the vast anti-Mitt Romney conspiracy.

More prominently, it’s been labelled a right-wing fantasy, in which the rich and powerful save Gotham from a reign of terror created by a rioting, looting underclass. In Step Up, it is the indigent flash-mobsters and their supporters who raise Miami up from its bland, gentrified decadence—an ideology that can be most accurately taxonomized as “proletariat dance.”

In TDKR, the archvillain is a bald, shabbily dressed agitator named Bane, who exploits the revolutionary sentiment of the great unwashed. In the end, things don’t go so well for Bane. In Step Up, the antagonist is an expensively suited, immaculately coiffed real-estate mogul named Bill (played by Peter Gallagher), who’s all about the status quo and profit margins. Bill ultimately redeems himself in the eyes of the commoners, and ends up not dying violently towards the film’s conclusion.

In TDRK, the hero is a Caucasian billionaire recluse who effects social change through streetfighting and use of the Batplane. (His cause is the restoration of peace and stability.) In Step Up, the saviors of Miami are a potpourri of low-income and ethnically diverse extroverts, who change the world through the uplifting power of elaborate krumpin’. (Their cause has something to do with fair housing.)

There are, however, a couple of similarities between the two films. Take, for instance, that fact that Bane wears a gas-mask and thuggishly ruins the lives of rich people and law enforcement officers. In Step Up, there’s a scene in which the throngs of “protest-dancers” (wearing gas masks) invade a corporate gala, throw smoke cannisters everywhere, frighten the shit out of a lot of rich folk, and then start brawling with cops. (Yep, studio executives did indeed leave this scene in the movie, even after the horrific Dark Knight mass shooting in Aurora, Colorado, just one week earlier.)

So, for anyone hankering for a movie that acts as an antidote to Batman’s alleged conservatism, by all means, run out and buy a ticket for Step Up Revolution as soon as possible.

For those looking to actually enjoy themselves at the movies this weekend, go see The Dark Knight Rises. Or Savages. Or Battleship. Just something, anything else that doesn’t play out like a protracted SYTYCD infomercial.

Step Up Revolution gets a wide release on Friday, July 27. The film is rated PG-13 for some suggestive dancing and language. Click here for local showtimes and tickets, if you dare.