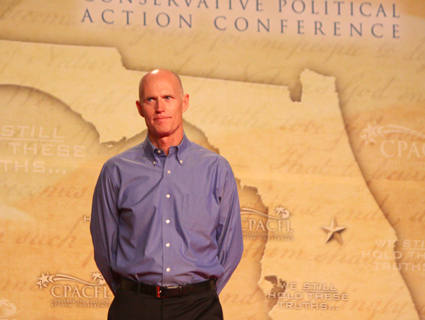 Welcome to the Sunshine State: Republican-run since 1998, tea party-controlled since 2010, and fast becoming one of the lowest-service states in the nation. Which helps explain how lawmakers shut down its only tuberculosis clinic last month, just as the worst outbreak of the infectious disease in America’s recent history flared up with a vengeance in Jacksonville, Miami, and who knows where else—an outbreak that state and local officials sat on until last month, according to an investigation published by the Palm Beach Post.

Tuberculosis—the lung-liquefying disease of “consumption”—is the world’s second-biggest infectious killer, but had been largely eradicated in America in the early 20th century, owing to improvements in health services. A few flare-ups, mostly of foreign origin and mostly affecting indigent populations, continued to occur sporadically in the United States, which was why Florida in 1950 opened the AG Holley State Hospital in Lantana, just west of Palm Beach. AG Holley’s website (which has since been taken down by the state) billed the facility as “the only public health hospital in Florida,” a safe place where TB victims could be quarantined and cured, and one of the last such facilities in the US.

Last spring, however, the GOP-dominated Legislature voted to shutter the hospital as a cost-saving measure. The state’s governor, former health care executive Rick Scott, signed the bill in April and even pressed for AG Holley’s closure to be moved up six months; the facility was permanently shuttered on July 2.

But what was Scott thinking? According to the Palm Beach Post exposé, AG Holley’s closure came after the Centers for Disease Control and Prevention had warned the governor and his state health office in a report that tuberculosis was making a big comeback in the state. That report apparently never made it from those state officials to legislators who had voted to close the TB hospital. According to the Post:

Had they seen the letter, decision makers would have learned that 3,000 people in the past two years may have had close contact with contagious people at Jacksonville’s homeless shelters, an outpatient mental health clinic and area jails. Yet only 253 people had been found and evaluated for TB infection, meaning Florida’s outbreak was, and is, far from contained.

The public was not to learn anything until early June, even though the same strain was appearing in other parts of the state, including Miami…Today, three months after it was sent to Tallahassee, the CDC report still has not been widely circulated.

Hundreds, possibly thousands, of people in Florida could now be carrying the TB strain, which so far has claimed 13 lives and been confirmed to have infected 99 people, including six children, according to the Post—the worst in America in 20 years. Its origins go back to a 2008 TB outbreak in a Jacksonville assisted-living facility that killed two people. To stop that strain, the CDC sent local health officials $275,000 to hire extra staff. But when the money ran out, the staff was cut, and containment of the disease was halted.

The problem is a scarcity of resources, Duval (Jacksonville) County Health Director Dr. Bob Harmon told the Post. Harmon’s department had 946 workers and $61 million in the kitty during the 2008 outbreak, but now “we’re down to 700 staff and revenue is down to $46 million,” he said. “It has affected most areas of the organization.” (Likewise, state funding for AG Holley had dwindled over the years, so that by the time its closure was on the table, the 500-bed facility only had money to handle 50 patients.)

That’s par for the course here in Florida, where even septic-tank inspections are derided as socialism, and conservative lawmakers have cut social services to the bone—and Rick Scott has cut even further, using his line-item veto to slash mercilessly at Legislature-approved spending he deems unimportant. During the same session in which AG Holley was ordered shut, Scott unilaterally cut $141 million to projects including an indigent psychiatric medicine program, Girls Incorporated of Sarasota County, the Alzheimer’s Family Care Center of Broward County, and a state settlement for child welfare case managers who were owed overtime. He also chopped a $1.5 million grant to rape and crisis counseling centers during Sexual Assault Awareness Month. (That grant was later restored after a public outcry.) More recently, Scott has vowed not to implement Obamacare or expand Medicaid in the state, leaving swaths of state residents without access to health insurance.

Florida’s population is growing at a rapid clip, but its infrastructure and state services are crumbling. In 2010 it had the lowest amount of state employees per capita, and it spends less than any other state on the employees it does have. Before Scott was elected in 2010, University of Miami political science professor George Gonzalez laid it out like this: “Florida is a sort of low-service state compared to other states, and [Scott’s] proposal appears to want to attract investment through low cost rather than high quality of services…He wants to make the state as inexpensive as possible.” That’s exactly what he did. The Florida Center for Fiscal and Economic Policy warned last year (PDF) that Florida’s shockingly low state taxes on corporations “are sufficient to provide only a low level of the public services necessary to support a decent quality of life.”

But now, Florida’s executive branch stands accused not just of cutting services, but of not alerting the public to a possible TB epidemic during the debate over AG Holley’s future. The head of the Florida House’s health care appropriations committee, Rep. Matt Hudson (R-Naples), said he never would have agreed to close the hospital if he’d known about the CDC’s report on the outbreak. “There is every bit of understanding that we cannot not take care of people who have a difficult case of TB,” he told the Post.

The newspaper, which obtained the CDC report after repeated open-records requests, sought a comment from the state’s health service; a spokesperson responded by arguing that overall cases of TB had gone down in 2011. Meanwhile, as local officials scramble to contain the TB outbreak, Scott is off on a “trade mission” to London, taking in an air show and talking about boosting the aerospace industry—a private business sector near and dear to his heart—with British Prime Minister David Cameron. He has not commented publicly about the TB outbreak.

It has spread to multiple population centers in Florida, including Jacksonville and Miami, where health officials are trying to drill down on cases as they surface. But, as the Post points out, “Most of the sick were poor black men,” who are likelier to fly under the state’s radar—and likelier to die of the debilitating disease as a result. Whether Florida can now turn the tide against the outbreak remains to be seen, and Floridians will continue to face the aftermath of Scott’s low-services paradigm of governance.

UPDATE 1, Monday, 5:12 p.m. EST: The Miami Herald reports that Florida Gov. Rick Scott is traveling through the UK with an 85-member entourage, including lobbyists from the gambling, insurance, real estate, and private prison industries. He still hasn’t commented on the TB outbreak.

UPDATE 2, Wednesday, 10:14 a.m. EST: Rick Scott’s office and the state’s health department put out dueling press statements yesterday blaming the press for “inaccuracies” in their reports. “As soon as the Department of Health (DOH) saw a slight spike in the FL0046 Tuberculosis strain, we immediately reached out to the Centers for Disease Control and Prevention (CDC) and engaged stakeholders in the community,” the health department’s statement read. “Contacting these local government officials, community organizations and hospitals is a clear sign that these actions were conducted with the utmost level of transparency.”

Brian Burgess, Gov. Scott’s combative communications director, wrote similarly: “The secrecy allegation is absurd, and is proven so by the fact that numerous community stakeholders were engaged in the effort to contain the disease.”

Both statements list several politicians and local government liaisons, but they don’t make clear whether, in “the utmost level of transparency,” they included homeless Floridians and at-risk state residents in Jacksonville, Miami, and elsewhere among the “community stakeholders” whom they informed about the outbreak. “We stand by our story,” said Palm Beach Post story editor Joel Engelhardt.

Meanwhile, Rick Scott continued his tour of England Wednesday, with an itinerary that included visits to the Farnsborough Air Show and Lloyds of London. In the nineteen months since the tea-party-endorsed conservative became governor, he’s also paid official visits to Brazil, Canada, Israel, Panama and Spain.